Just over a week ago, a new baby came into our life. The Lovely Sharon’s son, my stepson Nick and his beautiful wife Ali had a baby girl, Kendall Marie. The baby, mom and dad are doing great. Being the lawyer that I am, before the baby was born and even the day she was born, I had uncertainty what my relationship would be with Kendall. I knew I would love the baby but did not know if I would feel like a grandfather or be perceived as a grandfather by Nick, Ali, Kendall Marie and others. I wondered if I myself would feel like a grandfather. I am a stepfather but I really have not heard the phrase “step grandfather”. When I married Sharon, her two boys were already out of the house. I have been friends with both of Sharon’s sons before I was ever involved with Sharon. They were nice boys who grew up to be nice men. The boys’ father has been a tremendous, giving father to them and will no doubt be a doting grandfather to Kendall Marie.

As the time of birth got closer, Sharon’s excitement about being a grandmother grew. I continued to wonder about my own perception of what I was to the baby and how the family would perceive my role.

As a lawyer, it is my job to over analyze all aspects of the matter I am working on. To consider the matter from all directions, to contemplate what the other side is thinking and what they really want, to plan a strategy to accomplish what my client wants. I do this every day at work and have done so for more than 32 years. The problem with this is that you bring this behavior home with you every night. The very actions that make you a better lawyer are sometime impediments to personal relationships.

So as the birth of baby Kendall Marie neared, my angst grew. I discussed the situation with the Lovely Sharon. I told her I did not want to make assumptions as to my role with the baby that might offend the family. She told me that I would be a grandfather and that baby Kendall Marie would have three grandmothers and three grandfathers. Despite this assurance, I still was uncertain, had anxiety and in general, was still clueless about the whole thing.

On the day the baby was born, we visited mother, father and baby in the hospital. I was excited and got teary eyed. I was too nervous to hold the baby but stared in utter awe at this brand new human being, wondering what she was thinking, if she was thinking at all, what she was feeling. She had traveled from the total warmth, protection and comfort of the womb to the sterile environs of the hospital room with bright lights, strange sounds and giant creatures (us) surrounding her. It had to be a shock to her system but I suppose she must have been comforted by the sound of her mother’s voice and the gentle warmth of her mother’s arms holding her close.

On Saturday we visited the new family at their house. After a while, Sharon told me to hold Kendall Marie. In my nervousness I attempted to decline, but Sharon said non-sense, you can’t break the baby, just hold her. I did. I held her close to my chest. I felt her ever so light body in my arms and could  feel her warmth through her blanket. Her eyes were closed, but she yawned and smiled and moved around. I was enchanted. I started to realize that I was going to be a grandfather to this sweet baby. Ali touched Kendall’s head as I continued to hold her. Ali gently stroked her daughter’s forehead and said, “Your Grandpa’s holding you.”

I don’t recall now if Kendall Marie smiled, but I know I did, inside and out. Welcome to the world granddaughter. 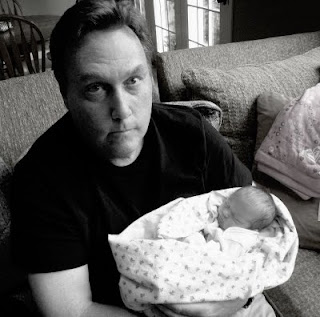