Off the Beaten Track

Three or four time a year I drive from Salt Lake City to Palm Desert, California. It is about 660 miles from our Utah house to our place in Palm Desert. On most of these trips I drive alone. My favorite part of the drive starts in Primm, Nevada (the border between Nevada and California on I-15). A few miles up I-15 on the California side is the Nipton exit. From this exit to Twentynine Palms, CA (“29 Palms”) is approximately 200 miles of two lane road, one in each direction, across the Mojave Desert. This is wild, isolated desert. Many of the readers of this blog have taken this road and know the area well. When I first took this route, I didn’t like it. I thought it was boring. But now that I have been going this way for more than 12 years, I love it.  I have probably made 100 or more trips counting back and forth. I am awed by the isolated beauty. This area pretty much looks like it did a hundred years ago. There are gigantic Joshua tree cactuses, coyotes, hawks, snakes and other critters.

As you drive through the Mojave Valley Preserve, the first town (if I can call it a town) that you come to is Cima. There only a few buildings standing, most of which are empty. This town started as a railroad town in 1906. There is a general store - post office which seems to be open some of the time. The Lovely Sharon and I stopped here a few years back, bought some stamps and talked to the Irene, the Post Mistress. She looked like she was in her 80’s but seemed very nice and we had a pleasant conversation.

We stopped at the Cima Post Office because I had recently purchased some postage stamps in Salt Lake that were motorcycle pictures and other stamps that looked like baseball cards. I told Sharon that I thought I would save these pretty stamps rather than use them. She responded by asserting that they were not collector stamps and that every post office in America probably had them for sale. When she said this we were 30 or 40 miles from Cima so it got me to thinking. You got it, when we got to the ghost town of Cima, Ca, in the middle of the Mojave Desert, I stopped at this teeny old wooden post office, walked in with the Lovely Sharon and met Ms. Irene. After our greetings and introductions, I casually asked Ms. Irene if she had motorcycle or baseball card stamps. When she said no, I just looked at the Lovely Sharon with a “In your face" smile. Nothing else needed to be said. We did buy some nice Indian blanket stamps.

A few years back my friends Steve and Cathy hit a cow in the early morning light just outside Cima. It totaled their car but thank goodness they were not hurt. The highway patrolman who was called to the crash site told them he was going to shoot the cow to put it out if its misery. He walked close to the cow,point blank, aimed his gun, shot and missed. He had to take another shot to finish off the cow. I think the crash, the gunshots and the overall experience was pretty tough on Steve and Cathy. The worse part of the experience was that my friend Gordon and I were waiting in Palm Desert to play golf with Steve latter that day.   He called us very shaken up while sitting in a crashed car in the middle of nowhere witnessing the assassination of a cow by a trooper who couldn’t shoot straight.  With great sympathy Gordon and I asked Steve if that meant golf was off for the day.

The next town you come to is Kelso, a ghost town and defunct railroad town. The town was built as a railroad station because of its location and nearby springs that provided abundant water. Starting off as what was a simple train depot in the 1920s, the town of Kelso boomed briefly to as many as 2,000 residents in the 1940s, when borax and iron mines opened nearby. Gold and silver were also discovered in the nearby hills of what became known as the Kelso district. The town shrank again when the mines closed after about a decade. Kelso was a base of operations for the Los Angeles and Salt Lake Railroad (now part of the Union Pacific). Trains were watered and "helper" locomotives were attached to assist the regular trains in climbing the steep Cima Hill. The distance between Las Vegas and the connection with the Santa Fe line at Daggett was too far for trains without a meal car, so Kelso was a convenient spot for a restaurant stop. The depot building itself was built in 1923 using a Spanish "California mission" building style. It contained boarding rooms for railroad employees and a restaurant for both employees and passengers. It also had a telegraph office and waiting room. Later, a restaurant nicknamed the "Beanery," that served home-style meals was housed in the building. The depot remained in operation until 1986. It was recently renovated to become the Mojave National Preserve's visitor center. Renovation was completed in 2005 and is now open to the public. It’s a beautiful old train station absolutely in the middle of nowhere (see http://en.wikipedia.org/wiki/Kelso,_California) 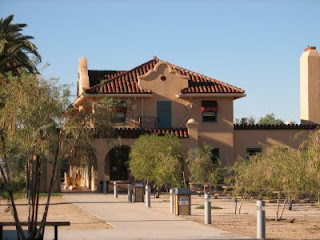 From Kelso it is about 40 miles to Amboy. You pass the 600 foot high Kelso Sand Dunes and a number of beautiful rock formations. Seven miles or so out of Amboy you turn on to the National Trails Highway and historic Route 66. Before you get to Amboy you pass the Shoe Tree. The Shoe Tree is a tamarisk tree in which people throw their shoes. There are probably a couple of hundred shoes in the tree. Amboy has the famous Roy’s Restaurant (at leaast the sigb "Roy's" is famous). For interesting photos and info about Amboy check out:    http://en.wikipedia.org/wiki/Amboy,_California

From Amboy it is about 60 Miles to 29 Palms, home of the 29 Palms Marine Base, the world’s largest Marine Base. On the way you pass dozens of abandoned squatter shacks all the same size, the same design and all abandoned. It’s almost eerie to see them standing in the desert, with windows gone, doors gone and no signs of human activity. You can almost hear the wind howl through the empty shacks. You can imagine the odd snake or lizard or scorpion crawling through or resting inside protected from the blistering sun. Who built these, why did they build them. Where did all the residents go and when did they go. Does anyone own these minature homes now?  Do you remember the movie "Dawn of the Dead? Maybe those folks live there.

Twentynine Palms is called the Mural City as many of its commercial buildings have murals painted on them. There are a bunch of barber shops in town, all advertising Marine haircuts. Apparently the Marine Corp has built an Iraqi village in the middle of the desert for training purposes.

If you have not taken this 200 mile adventure, it is worth doing. Don’t just speed through. Look at the beautiful country, the desolation, the rock formations, the abandoned buildings, and the railroad. Keep an eye open for critters. It makes you feel like you are in a different time. You can visualize folks in the 1950’s driving past Roy’s in Amboy when there were taking Route 66 from Chicago to Santa Monica. Remember the Nat King Cole song:


If you ever plan to motor west

Travel my way, the highway that's the best.

Get your kicks on Route 66! 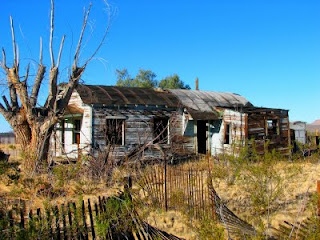