On October 14, 2009, I wrote about “The Neighbor’s Dog”. Well even though I do not have a dog, it is my opinion that one cannot write too often about life’s most loving creature and finest companion, the dog. I had a couple of dogs at different times when I was a boy. During my first marriage I was blessed to have the “Wilson” who was the cutest, smartest funniest, most loving wired haired fox terrier on the planet. (That may sound like an overstatement, but since this is my blog, a blog of which I am the captain if you will, and you are only a passenger on this train through my meaningless meanderings, you are legally and morally required to accept my assertions as truths. You are required to accept and be bound my claims of veracity, not only to particular statements which are pointed out to you by me, the captain, but the veracity of everything written in The Big Picture.) Here are a couple of pictures of fox terriers if you a drawing a blank on what a fox terrier looks like: 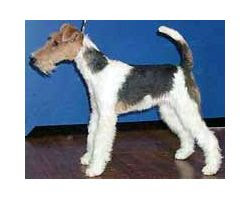 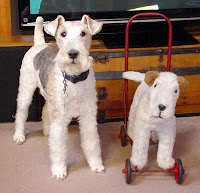 OK, back to Wilson, the dog of my first marriage. We considered the matter of buying a dog for several months. I had always fancied the wired hair fox terrier and read several dog books about the breed. If you are fans of the Thin Man movies from the 1930’s and 1940’s you will be familiar with “Asta”, the dog of characters Nick and Nora played by William Powell and Myrna Loy. I was fan of the Thin Man movies; I was a fan of Nick and Nora; and I was a fan of Asta. Here is a picture of the three of them. 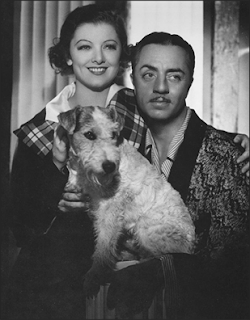 So we decided to get a wired hair fox terrier. Once we made the decision, we could not find a pure bread fox terrier puppy available in Salt Lake City. I bought a few dog magazines and found a breeder in Boise, called them up and was told they had a litter of 4 or 5 purebred puppies that were about 6 weeks old. We agreed to take one and we drove to Boise on a quest to adopt a purebred fox terrier puppy. It was a memorable trip to Boise and on the ride home Wilson became part of the family. What a wonderful addition to the family I must say. Such a character, so fun, so warm, so loving, he was great. My first wife and I ultimately divorced but have remained friends. If you have been through a divorce you know how painful they are and how disruptive they are to the lives of all involved. When you read the legal documents of the divorce, every sentence is painful. For me one of the sentences that struck me the hardest were the words “the party of the first part is awarded custody of a Dog named Wilson.” Those words were actually in the Decree of Divorce and I was not the party of the first part. It illustrates how much we treasure our beloved dogs when the court system makes a decision with an iron fist, as to who gets the dog.

I have had no dog since that time. My current situation of traveling back and forth frequently between Salt Lake City and Palm Desert makes it difficult to have a dog. Yesterday I had the best next thing to having a dog; the Lovely Sharon and I were asked to dog sit the dog of our dear friends and Palm Desert neighbors, Ray and Kaye. This was a different dog than “The Neighbor’s Dog" described in the October 14, 2009 blog entry. This was Hannah, the beautiful and dignified Golden Retriever.

Yesterday, Ray and Kaye went to the San Diego Chargers football game and Sharon and I had a golf game scheduled with other friends. Kaye asked the Lovely Sharon if we could visit Hannah after we finished our golf game. Kaye requested that we take Hannah on a walk, and at 6:00 pm sharp, prepare a specifically described meal for Hannah. Sharon agreed. So after our golf, and while Ray and Kaye were sitting in the football stadium watching the San Diego Chargers game, we walked over to Hannah’s house. The encounter started slow as she bared her teeth and snarled when we approached. (I am referring to Hannah not the Lovely Sharon.) Although we have spent time with Hannah, it had been a number of months and she considered us as trespassers when we initially arrived. However, after we took turns smelling each other’s private parts (me and Hannah not me and the Lovely Sharon), things were just fine. We found a leash and went for a nice walk. I negotiated the best deal for me as I agreed to hold the leash and Sharon got stuck with handling the baggy duty.

After the walk, we took Hannah to her home and determined to leave her there on her own until 6:00 when we would come back to prepare her dinner. However, she looked a little sad so we decided to take her back to our place to watch the rest of the Charger game on TV. She willingly accompanied us to our place a couple of doors down the street and spent an hour and a half with us. She walked around the house checking everything out, she smelled the presents under the Christmas tree, she drank a couple of bowls of water, she curled up on the rug in front of the fridge, she stared at Sharon while Sharon was snacking on cheese and crackers and finally she came and sat by me where she licked all visible parts of my bare legs (I had on golf shorts). Don’t tell Kaye but we gave Hannah a couple of snacks. Hey what do you expect, you have a guest over you offer them something to eat, right?

Finally it was near 6:00 pm, the designated dinner hour. While Sharon walked Hannah back to her house, to prepare a dinner consisting of canned dog food with dry dog food mix. I took a shower to soap off the dog saliva from my legs.

After my shower, Sharon came back from dinner duty and we made our own dinner. I can tell you, it felt like something or someone was missing. The house was still decorated for Christmas and the TV was still on but it felt surprisingly quiet. Hannah was back at her home. When I went to bed, I thought about what a nice day it had been, thanks to Ray and Kaye for asking us to visit Hannah. Today I am going to buy some dog treats, just to have them handy for future needs.
Posted by Bud Headman at 7:55 AM