I read a fair number of online news/political blogs and sites. I try to read those that are liberal leaning as well as those that are conservative leaning. My favorite online source is The Huffington Post. Today a new online news outlet started that is conservative leaning. Its driving force is Tucker Carlson. Tucker has been political correspondent for CNN, MSNBC and Fox. I have not agreed with Tucker much over the years, but I like the way he handles himself, I like his reasoned opinions (even if I disagree with them). I am going to look at his web site on a regular basis. His site is called the Daily Caller and is at http://dailycaller.com/

In 2009, the movie “The Hangover” was released. I never wanted to watch it. It sounded dumb, sophomoric and not worth spending time on. I was home alone in Salt Lake this weekend cleaning house, running errands and watching football. I was looking at the Comcast on Demand movie schedule and saw the listing for The Hangover. I thought, what the heck, so I watched the movie. It was hilarious. I watched a number of scenes several times. I was laughing out loud while watching alone. It was dumb and sophomoric but for me not a waste of time. I am not certain it’s the kind of a movie the Lovely Sharon would enjoy but I am glad I saw it.

Yesterday at Ironwood Country Club, the annual Cactus Couples golf tournament was held. I was in Salt Lake so I didn’t play. Sharon was asked to fill in for lady that got stuck out of town in a snow storm. So Sharon was the partner of the lady’s husband and they played with another couple to make up the four person team. I am pleased to report they won first place in the gross division. It sounded like they all played well. They winners were announced at the tournament dinner last night.

The Ironwood Country Club Ladies Golf team had their last match of the season today and they were the gross champion of their desert country club league. This talented group of women is a perennial league champion; this year was no different. I don’t think I could beat any woman on the team. They are terrific golfers and strong competitors. The Lovely Sharon is a member of the team. My congratulations to each team member.

I received a call today in which I was invited to dinner and a movie. It sounds like a date doesn’t it? Before you start gossiping, you need to be aware that I was invited by a married male financial planner who has common clients with me. His firm has some movie tickets for a Sundance Film Festival movie. I am going to meet him in Park City at the end of January for dinner and the movie. Sounds fun. I wonder what I should wear?

The fellow who set his underwear on fire while trying to blow up the plane pleaded not guilty. Big surprise. Once he is found guilty, I think they should put fireworks all over him and light them. I hope the one good thing that comes out of this incident is that travel security starts looking at names, country of origin and appearance when checking travelers. I know it is very politically incorrect to “profile”, but I for one think it is logical to do so. If a fellow named Mohammed gets on an airplane in Amsterdam heading for Detroit, has a one way ticket and no coat (and its winter in Detroit), he ought to be further questioned. I think we are kidding ourselves by not making logical decisions on profiling matters. There were not many blonde hair, blue eyed Swedish guys in the 9-11 bunch. 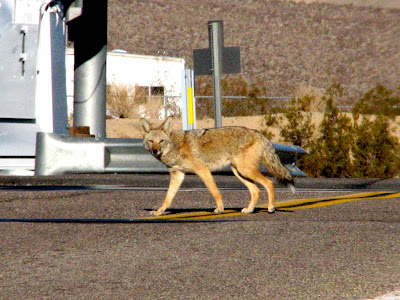 I like coyotes. I know these varmints are dangerous, wild killers who go after dogs, cats and small children but I like the way they sound, howling in the late afternoon, with their voices echoing off the mountains surrounding the Ironwood South Course. I like the way look. They have been able to thrive in the desert, in the cities. They seem to be everywhere.  We have to remember that we share the planet with all of these wild creatures.    Here is a photo of a coyote I took on January 2, 2010 at the Kelso Train Depot in the Mojave Desert. I took this photo while sitting in my car.
Posted by Bud Headman at 5:06 PM