Friday February 12th was a beautiful day in Palm Desert. The Lovely Sharon and I had breakfast at Café des Beaux Arts on El Paseo, my favorite place for breakfast. Sitting in the sunshine at an open air window, as people strolled by our table we talked about our plans for the day and read the paper. Every time I eat breakfast at Café des Beaux Arts I have the same waitress, a French woman who always greets me with “Bon Jour” and when she brings me my eggs benedicts always says “Bon Appétit”. I do not speak French but when I eat breakfast at Café des Beau Arts I always want to spend the rest of the day speaking in a phony French accent. “Oh mon cheri”. It makes me want to sing like Maurice Chevalier, “Thank heaven for little girls” or “Every little breeze seems to whisper Louise” (you gotta imagine a very heavy, phony French accent, me making goofy French- like faces here as you picture me singing).

After breakfast we went to Desert Falls Country Club. The Lovely Sharon played in a golf tournament there on Thursday and she and her partner won first place and were awarded pro shop credit. So we looked around until she found a pair of golf shoes she wanted. By my count she now has 127 pairs of golf shoes in her active rotation. She will undoubtedly deny she has that many claiming she only has 90 or so, but don’t believe her. I know, inasmuch as I am the person who transports them back and forth between Utah and Palm Desert each season. If you did not read my blog entry about her golf shoes last year check out the May 30, 2009 entry entitled “Size 7 ½ Ladies Golf Shoes”.

After Desert Falls we went to the Pete Carlson’s golf expo at the Desert Willow golf course. The place was packed. There were tents from Callaway, Titleist, Adams and many others. There was food and music, golf company equipment vans. Oh yes , the object that is at every fine event was in attendance, the Port- a- Potty. These portable johns were lined up like little soldiers waiting to serve when called upon. At a crowded event served by Port-a-Potties, it always interests me to watch people in line. You have 5 or 6 people in line in front of each of the 6 or 7 Potties, waiting their turn in an orderly fashion. When you think about it, how do we all know the proper behavior for a Port-a-Potty line? We were not taught the proper routine in school or at home.  We do not go to Port-a Potty Behavior seminars.  We know we don’t sing or yell, or butt in while in line. We don’t ask the woman next to us “so what are you doing?” Even if we are gentlemen we don’t offer our seat to the lady behind us. We just know what to do.  It’s just some innate, human gene that we were given by the cosmos that lets us know how to behave in a Port-a-Party waiting line. It is like we are part of some bigger cosmic dance, people entering the Port-a-Potty, people leaving, people moving up in line. Once we are inside we carefully turn the lock that causes the outside of the door to read “Occupied”. How embarrassing it would be if we did not trigger the Occupied sign and the next unsuspecting user were to attempt to enter the small confines of this portable relief station while we had unfinished business.

But I digress, I did not mean to venture off into a Port-a-Potty discussion, I meant to describe the Lovely Sharon’s minutes of stardom at the golf expo. She wanted to hit the new Adams Golf driver. So we got in line at the Adams Golf booth on the driving range. There were two hitting spaces assigned to the Adams booth so we had to wait 15 minutes or so for Sharon’s turn to hit the demo driver. As we waited, we talked to a very nice Adams’ Golf man who showed us the various drivers, utility clubs.  He told us about playing the US Senior Amateur and the British Senior Amateur which he played in several times. I told him that Sharon was a very good golfer.  Finally, the Lovely Sharon was at the head of the line. It was her turn to hit the demo driver. There were a couple of hundred people on the driving range and 20 or 30 in and around the Adams Golf booth. Adams Golf founder Barney Adams was helping the man next to the Lovely Sharon. The first driver Sharon tried out was not quite the right one for her. She hit balls straight with it but the flight was a little low. They handed her a different driver. She got into position over the ball, studiously considered the ball, her swing and the shot. She drew the club back to the top and fired through. The result was a work of art. She hit another ball and another and still another. Each one better than the last. It became quiet all around us. The Adams Golf workers, the people in line and the others on the range stopped what they were doing to watch this small blonde female pound drive after drive down the middle of the fairway; long, beautifully flighted shots. Barney Adams stopped instructing the fellow he was working with to watch. Birds stopped singing to listen to the clean crack of the driver head on the ball. Small children oohed and awed. One old man in golf shorts wearing black knee high socks, actually wiped a tear away from his eye, as though remembering an early time of his life.

I proudly stood there watching the scene, holding the Lovely Sharon’s black purse. Finally Barney Adams approached the Lovely Sharon and said "you should buy that club" and he asked her where she played golf. The scene was now over, people went back to what they were doing and the birds started singing. Sharon handed the demo driver back to the Adams golf folks and I handed the Lovely Sharon back her purse.

Without a word we walked away, to the cashier’s tent and bought the driver.

From there we went back to Ironwood for a round of golf. 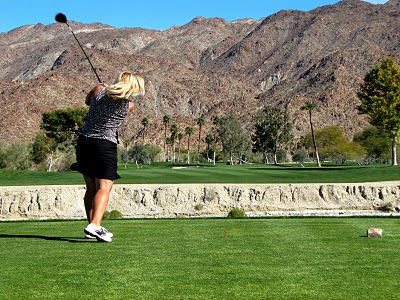