I have always been interested in golf course architects and learning what courses they designed and playing courses they have designed. I am a fan of Alister MacKenzie (Cypress Point, Pasa Tiempo, Augusta, The Valley Club in Montecito and Green Hills Country Club); Tom Doak (Pacific Dunes); Robert Trent Jones, Jr.; Desmond Muirhead; and Tom Fasio. A good website is Tom Doak’s http://www.renaissancegolf.com/. I have read a number of books about golf course architects and the building of specific golf courses from the time the property was acquired to the opening of the course. I am very interested in who designed a course that I am playing. When you play a Pete Dye course you pretty much know who designed it. Desmond Muirhead was the original designer of Ironwood’s South Course, the Dinah Shore Course at Mission hills, and with Jack Nicklaus, Muirfield Village. Before he died, I corresponded with Mr. Muirhead and he sent me a list of all of the courses he designed.

A couple of weeks ago, the Lovely Sharon and I played the Ojai Resort and Spa golf course. This was one of those old time feeling golf courses that I just love. A course that was built at a time when there were limited earth moving machines and as a result, the course was laid out over the natural terrain that God created. The course is not as long as most of the modern courses (6,300 yards), but it is challenging, beautiful and well worth playing. There are several holes with elevated tees that call for tee shots over ravines or off cliffs. Designed and built in 1923 or so under the direction of George C. Thomas, Jr. and William P. Bell, the course was hailed as "a marvel of golfing architecture." The 16th hole is a downhill par three about 200 yards long. When I first walked to the tee, and looked down at the hole, I actually laughed at loud. The green was at the end of a peninsula. On the right side was the cart path and then out of bounds. On the left side was a 20 foot drop off to the 17th cart path. It was straight down to the cart path so if you missed left by much you had no shot and likely could not even find your ball.. Behind the green was a drop off and in front of the green there were about a dozen bunkers. As a bad golfer standing on the tee looking down at the green it absolutely looked like there was no way I was going to get on the green with my tee shot. I played the hole twice over two days and did not in fact get on the green with my tee ball. On the first day I was just short of the green on the left side about two feet from going down the drop off and on the second day I hit the ball straight at the pin but came up short in one of the bunkers. It really is a terrific hole. The next photo is Ojai No.5 an elevated par 4. 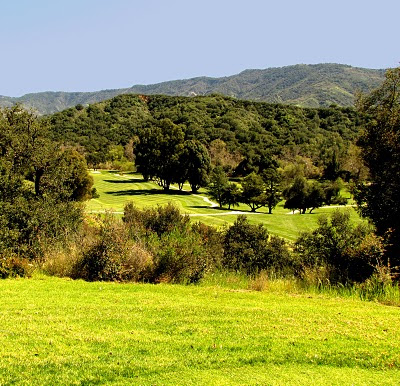 After learning that the course was designed by George Thomas and Billy Bell Senior, I reviewed information about George Thomas. Mr. Thomas is known as one of the great golf course architects from the 1920’s, which is often referred to as the “Golden Age” of golf course design. He was born in Philadelphia. He moved to California to pursue his great hobby of growing roses. In 1924 he wrote a book entitled “Roses for All American Climates.” Mr. Thomas also wrote "Golf Architecture in America" (1927). which is still regarded today as among the most fascinating books on course design.

However, for the golf fans, it is not his knowledge and skill with roses that creates our interests about Mr. Thomas, it is genius designing golf courses. His courses include the Ojai course, White Marsh Valley, Philadelphia, PA (1908), La Cumbre, Santa Barbara, CA (1920), Los Angeles CC-North, Los Angeles, CA (1921), Griffith Park-Harding, Los Angeles, CA (1926), Bel-Air, Los Angeles, CA (1927) Riviera, Pacific Palisades, CA (1927). Some of his courses are no longer around and some of have been significantly modified. Apparently, the Riviera Country Club (where the PGA plays the LA Open) has had the fewest changes from Mr. Thomas’s original work. If you recall Riviera, its 10th hole is a downhill 310 yard par 4 that gives the pro’s fits.

There is a book about Mr. Thomas entitled “The Captain: George C. Thomas, Jr. and his Golf Architecture”.

If any of you have a favorite course or a favorite golf course architect, I would be interested to hear about it.
Posted by Bud Headman at 4:59 PM