I love the News

Here are a few interesting items from the news. I did not make them up. I read them and must admit that I just had to talk about them:

So now these women having bathtub caulk in their butt. How would you get it out? Can you imagine ladies discussing cosmetic procedures?

“ Your bottom looks fantastic, who is your plastic surgeon?”

“Oh, I don’t have a plastic surgeon. My toilet was broken and since the plumber was at the house already, I had him do a little cosmetic work.”

I suppose the next thing would be for men to buy plaster of paris instead of viagra.

CNN- 3/9/10 - At the Han River Dog Meat Restaurant in central Guangzhou, diners can choose from a long list of menu items, including dog soup, dog steak, dog with tofu and more. In the kitchen, the chef chops up meat for dog hot pot, one of the more popular dishes. Most customers like it spicy. "Dog meat is good for your health and metabolism," explains Li, hostess who declined to give her first name. "In the summer it helps you sweat." Eating dog meat is a long-standing culinary tradition not just in China, but also Korea. Cat meat can be found on the menu in China, Vietnam and even parts of South America.

Oh so it helps with metabolism. Instead of Weight Watchers, Jenny Craig or the South Beach Diet you could go on the poodle diet. You eat a couple of dogs and you start responding to high pitched whistles. I suppose instead of urinals the restaurant has fire hydrants. Apparently there is a movement in China to ban eating dogs. For heaven’s sake I hope they stop eating cats and dogs, this article was horrifying.

Rush Limbaugh Could be Moving

Right wing comedian Rush Limbaugh has said that if health care passes he will leave the country. Boy wouldn’t that make me sad. I hope Dick Cheney makes the same threat.

New York Post 3/9/10- This Chelsea restaurant has gone from brasserie to brassiere. Chef Daniel Angerer is letting diners at Klee Brasserie munch on cheese made from his wife's breast milk. "It tastes like cow's-milk cheese, kind of sweet," he told The Post. The flavor depends on what the cheese is served with -- Angerer recommends a Riesling -- and "what the mother eats," said Angerer, who once bested Bobby Flay on TV's "Iron Chef." Breast milk doesn't curdle well due to its low protein content, so a little moo juice has to be added to round out the texture, Angerer said.

Look at this guy’s picture. He looks like someone who would make cheese out of his wife’s breast milk. 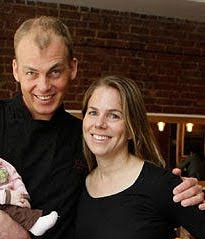 I am really not sure what I can add to this story. But I suppose if you were in China you could order the breast milk cheese, a nice red zinfandel and a wire haired fox terrior.

On February 22, 2010, 14,000 people in Germany gathered to watch topless women and naked men ride toboggans down a hillside..

The Week Magazine 3/8/2010 - Sarah Palin has shed new light on her much-mocked decision to scrawl 'crib notes' on her hand before addressing the National Tea Party Convention. "Somebody sent me the other day Isaiah 49:16," Palin told an Ohio Right to Life fundraiser crowd on March 5. "In that passage, [God] says, I wrote your name on the palm of my hand to remember you. And I'm, like, okay, I'm in good company."

So Palin equates her actions to God’s actions. I sure as heck hope she doesn’t curse us with a plague of locust.

If you need a laugh, read the news.
Posted by Bud Headman at 4:20 PM