I have not posted for awhile. Last week the Lovely Sharon and I spent a couple of days at the Ojai Resort and a couple of days in Santa Barbara. The weather was beautiful, we had a wonderful time. So I was away from the computer. Here are some random thoughts that have been rattling around my head. There is no connection between these thoughts and the mere fact they all exist simultaneously in my brain is fairly scarey.

Last week the Lovely Sharon and I stayed two nights at the Fess Parker Hotel in Santa Barbara. Yesterday, Fess Parker passed away at age 85. Coincidence?

I love the looks of the Pelican. Here is a photo of one I took on the Santa Barbara Pier. 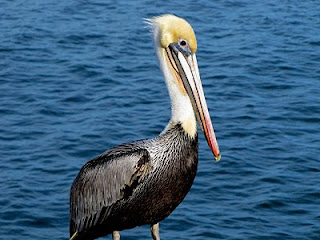 Have you noticed that after couples have been together for awhile, their names seem to fit together? Scott and Tanya (my brother-in-law and sister); Ray and Kay (California friends); Art and Ione (my parents); Gordon and Linda (Utah friends). These names almost seem to be a single name that covers both people. Think about other famous couples names, it’s the same deal: Bill and Hillary; Saddam and Hamida, Fidel and Maria, Adolf and Eva.   Utah folks you are aware of Brigham and Sally and Jane, and Nancy and Amy and Mary and Linda and Lilly Beth and Sarah and Patricia etc.

Here is a good story I read yesterday: FALL RIVER, Mass. - A former Massachusetts dentist is accused of putting paper clips in patients’ mouths during root canals, then billing Medicaid for the stainless steel posts he should have used. The state attorney general announced Tuesday that a grand jury indicted former Fall River dentist Michael Clair last week. The charges include assault and battery, larceny, submitting false claims to Medicaid, and illegally prescribing drugs. You know that when the dental patients sue the dentist, and there is no doubt that they will, the public will blast the patients' lawyers for running up the cost of healthcare with frivolous lawsuits. Maybe this dentist was not a cheater at all, maybe he was like former TV hero Macgyver who used normal household products to escape from danger or to save the world. Perfect, he should use the Macgyver defense in his criminal trial.

Wednesday night I had a very nice dinner with dear friends Bruce and Barbara. The food was good and so was the conversation. We talked of history and politics for a couple of hours. I think Bruce and I might take the pony express trail from Vernon, Utah to Callao, Utah later this year. This is about an 80 mile dirt road through desolate country. There is an old stone pony express stop still standing, you pass through Fish Springs National Wildlife Refuge, and you end up in Nevada. Part of this road is the old Lincoln Highway. I took this road a few years ago and have wanted to go back again.

A couple of weeks ago I was given a book by my friend Norm. "The Age of Gold: The California Gold Rush and the New American Dream" by H.W. Brands. I finished it Wednesday night. It is a terrific read and I highly recommend it. As a result of reading this book I just ordered a two volume set about Leland Stanford. Norm asked me not to mention his name in this blog.  So I won't.

I ran into friend Greg from Chicago last night at dinner.  He  threatened to quit reading this blog if I did not mention him.  Actually his threat was fairly mild from someone from Chicago.  Usually threats from Chicago involve fish in mail boxes. broken bones, or cement boots. So hello to Greg and by the way Greg, that six inch diameter purple growth on your neck is barely noticeable.

Best wishes to all.
Posted by Bud Headman at 7:38 AM