The Best Thing Dick Cheney Ever Did

Dick Cheney. Can’t those words just fade away into the abyss of American History? He just seems to keep spewing out stuff that you normally see from the south end of a northbound horse. He is like a lingering cough, you can't get rid of it and it makes you want to spit all of the time. Yesterday he was on the Dennis Miller show and they were discussing Cheney’s go “F__K” yourself episode. If you recall, on the Senate floor in 2004, Dick Cheney had a run-in with Senator Patrick Leahy (D-Vt.). After the two argued over Cheney's ties to Halliburton and President Bush's judicial nominees, the then-vice president told the senator to "go f__k yourself.” Last night on Dennis Miller, while referring to the “go f—K yourself” comment, Cheney said:

"That's sort of the best thing I ever did."

I agree with Cheney. After serving as Vice President of the United States for eight years, even in his own analysis, the best thing he did was to tell someone he disagreed with to “Go F__k Yourself”. What a legacy. What a thing to be proud of. Just think about it:

Teddy Roosevelt was famous as a trust buster and the father of the National Park Systems. FDR’s legacy was dealing with the great depression and World War II. Ike helped the country normalize after WWII, Reagan was known for many things including to help end the cold war. But Dick Cheney, by his own admission while assessing his Vice Presidency concluded, “the best thing I ever did” was tell Senator Leahy to go “F__K” himself. 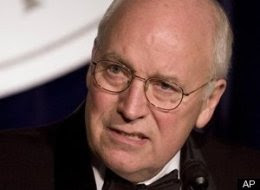 Oh Dick, Dick Dick. No wonder I continue to ponder the question whether your name is really “Dick” or do they just call you that?
Posted by Bud Headman at 6:26 AM