Last week I drove to Palm Desert for my final trip of the season. I drove down so that I could bring home the Lovely Sharon’s shoes, my golf clubs, some clothes and few other things. This year I estimate that I brought home 150 pairs of shoes (golf and non-golf shoes) belonging to the Lovely Sharon. If you read this blog in May of 2009, you may recall my description of her shoes pouring out of my car. This was more the same.

I did the drive to Palm Desert over 2 days leaving Salt Lake at 3:00 on Tuesday afternoon and arriving in Palm Desert late Wednesday morning. As normal, I left Interstate 15 just after Primm, Nevada to take the route through the Mojave Desert that I have previously blogged about. About 10 miles before I reached the Cima Post Office, I saw a dead critter up ahead on the road. I also noticed two large birds flying around on the left side of the road. They were very big. I could not tell what kind of birds they were, primarily because I am not a bird expert, but they were big and I wondered if they were bald eagles. As I drove closer to the dead critter, the big birds were flying closer to the road and were getting lower to the ground. I was only driving about 60 miles per hour and I thought the birds would stay clear of me. Wrong. As I got closer to the dead critter, the two birds flew over the road about 6 feet off the ground and then to my horror, one of the birds made a u turn from the right side of the road and landed on the road at the dead critter just as my car reached the same spot. Guess what? I hit the big bird with my right from bumper. Deader than a door nail. I was sick. I looked back in the rearview window and saw the big bird crushed on the ground. I did not know what to do or what kind of bird it was. I thought if it was a bald eagle have I killed a national endangered treasure? I can’t tell you how bad I felt.

I kept driving looking for a National Park Service vehicle. The National Park Service patrols the road through this area. Usually you see a couple of their vehicles between Cima and Amboy. I saw none through Cima but when I pulled into the Kelso Depot, there was a National Park service vehicle with a federal employee inside. I walked to his vehicle to turn myself in for endangered bird murder. I almost felt like I deserved capital punishment. Don’t put me in jail, just run over me with a Buick Enclave just as I had done to one of God’s creatures 40 miles down the road. As I walked to the truck, the bearded gentlemen looked up. He looked like someone who ought to be patrolling the Mojave Desert, wearing a light green Park Services shirt and dark green trousers. He had a straggly beard and windblown hair. His face was weathered as though he had spent many years in the desert. It looked like dry cracked ground on which water had evaporated, leaving only a mosaic of cracks.

It occurred to me that this fellow had probably dealt with more than one endangered bird killer before. So when I began to confess, my heart was pounding. He looked at me and in a voice textured by ten thousand unfiltered Camel cigarettes, he asked “May I help you.”

I responded with “I need to tell you about something I did.” After that statement, his look of boredom turned into one of curiosity. I proceeded to tell him what I did. I gave him my business card and I waited for him to speak. After he looked at my card, he looked at me directly in the eyes and started to speak. I thought, oh boy here it goes.

But he said “Don’t worry about it; I am certain it was a turkey vulture not an eagle.”

He then told me that it was not uncommon for a vehicle to hit a turkey vulture that landed on the road at the last minute. Although I was relieved, I still felt bad. I got in my car to drive the next 40 miles to Amboy, thought about the big bird, its life cut short by a “wrong place at the wrong time” interaction with me.

Located a couple of miles outside of Amboy is the famous shoe tree. This is a famous tree into which people have been throwing shoes for years. As you pass the shoe tree it appears surreal to be out in the middle of nowhere full of shoes. I always looked forward to seeing the shoe tree. This trip, as I passed the shoe tree, I was disappointed to see it toppled over, dead, still covered with shoes. I stopped at Roy’s gas station two miles down the road in Amboy for a bottle of water. I asked the clerk what happened to the shoe tree, I wondered if some miscreant had cut it down. He said no that the wind had toppled it a few months earlier.

First a dead bird, now the dead shoe tree. I got back in the Buick with a heavy heart.

I finally arrived in Palm Desert.

One Friday, I was in the condo and the Lovely Sharon  was on the patio.  She shouted for me to come.  I could tell by her voice, something was wrong.  When I reached the patio, she pointed out a dead red finch in one of the bird feeders.  This poor bird had climbed through the hole where the seeds pour into the tray and could not get out. He died.

The rest of an odd weekend was spent golfing and packing up for the trip home and watching birds (live birds). A mother Red Hawk had babies a few weeks ago in a nest on the Ironwood golf course and we have been watching them since they hatched. The nest is probably 25 or 30 feet off the ground. I took a number of pictures of the babies. If you look closely you can see the second baby’s beak on the side of the baby looking at the camera. 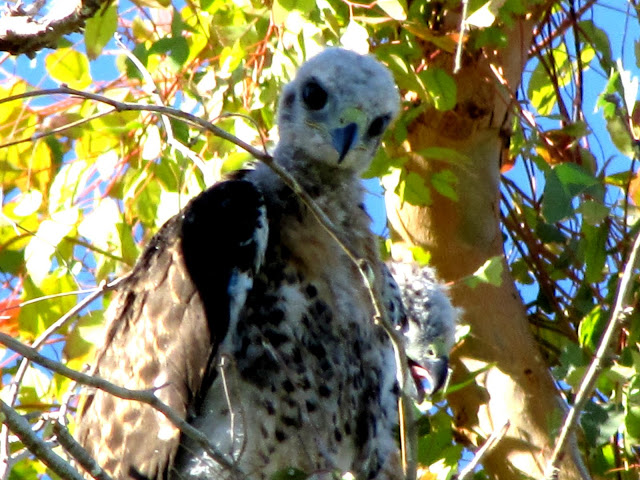 We have a large crew of humming birds on our patio.  We call all the males Tony and all the females Bella. They are used to us and fly within a foot or two of us as we are on the patio. 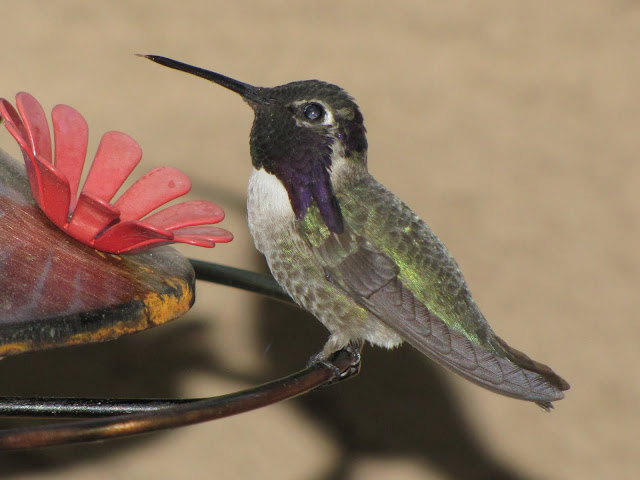 I left early Sunday morning to drive back to Utah. The drive was uneventful as I didn’t run over anything. I did see a white face Mime waiving a pizza sign near a gas station in Las Vegas and I thought about running over him, but ultimately had a change of heart. I arrived back in Salt Lake around 8:00 in the evening and then spent an hour unloading the car. It was kind of sad to realize no more trips to the desert until Thanksgiving, no more encounters with Palm Desert friends. But all in all, I am looking forward to the Lovely Sharon coming back to Utah in a week or so and listening to her point out all the dust in the house and wondering why I have so many books on the Bud Cave floor.
Posted by Bud Headman at 5:12 AM