Last week was a perfect week. Not a good week, not a great week, it was a perfect week. It was United States Open week and the Open was held at Pebble Beach. I have been to Pebble Beach and the Carmel area many times during my life. Over the years I have played many rounds of golf on famous and not so famous courses in the area. When I first started dating the Lovely Sharon, the first trip we took together was to play golf at the world famous Cypress Point Golf Club. When Son Alex was just a lad he and I did one of our boys trip to San Francisco and Carmel. So the area has sentimental and romantic meaning for me.

I had never been to a US Open before and I thought that at least once in my life I would go. I know that you can see the tournament better on TV and I was not interested in going every day to the tournament. Just one day was all I needed. One day at the US Open walking the Links at Pebble Beach. I bought the tickets a couple of months ago and then organized a trip around the Friday round at the tournament.

The Lovely Sharon and I flew out of Salt Lake for San Jose early Wednesday morning. We arrived at our lodging in the Monterey area around noon and checked into our accommodations. Because of the US Open the hotels, motels and inns had all increased their prices significantly and some required five to seven days of reservations. By the time I had purchased the golf tickets many of the rooms were already gone. Our hotel reservations were for a place that might kindly be called a “Norman Bates Motel” in Seaside, California. For those of you who have seen the famous Alfred Hitchcock movie “Psycho” you know what a Norman Bates Motel is. The best thing I can say about this room was that no one was stabbed in the shower by a man wearing his mother’s clothes during our stay. Generally, we stay in high end hotels, accommodations that make you feel special, places you almost hate to leave. But on this trip, that was not the case. The room was clean but relatively small with spartan furnishings. You could not fully open the bathroom door as it would not go past the toilet. So you had to ease yourself into the bathroom on a sort of sideways basis, stand near the toilet and then close the door. There were two beds in the room and we each had our own. Every time I rolled over, the bottom sheet came off. I ended up sleeping on the bare mattress. The small sliding door overlooking the parking lot had shear curtains and heavier solid curtains to keep the daylight out. After we came back to the room the second night after our daily excursion, the heavier curtains were half hanging off the curtain rod. Although she worked on it, Sharon was unable to get the heavy curtains back on track. For most of the trip, when you walked into the room, it appeared as though monkeys had been playing on the curtains.

After we unpacked our bags at this shangri la, we drove to Pacific Grove for lunch. I got lost and ended up on the military base, the Presidio. The MP’s were nice enough not to taser us and directed us off of the base to main street of Pacific Grove where we had a nice lunch at Toadies. After lunch we headed for the famous 17 Mile Drive where we parked our car and walked to the rocky shore. We climbed on rocks and watched and listened to the waves crashing on the rocks around us. The sky was blue and the air was that crisp cool ocean side air that you always seem to have in Carmel. For me, a walk on the rocks near the ocean on the 17 Mile Drive has always been one of life’s great pleasures. 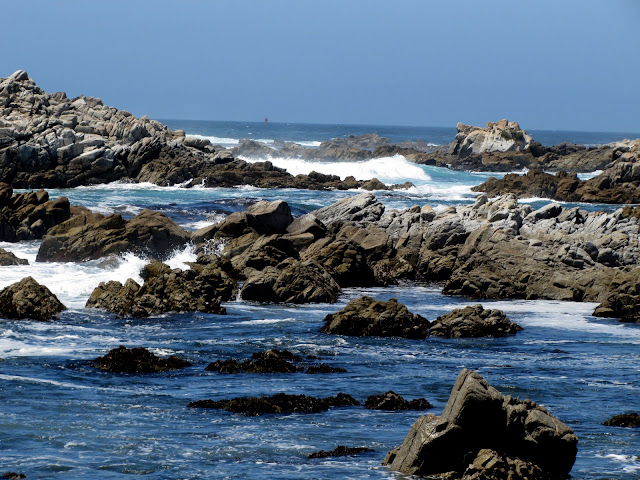 After our seaside adventure we drove to Carmel where we strolled down Ocean Avenue, going into some of the shops and window shopping at others. As we walked down the avenue, the Lovely Sharon informed me that on the last three trips to Pebble Beach I had purchased jewelry for her. As a securities lawyer I felt compelled to look romantically look into her eyes and tell her that “past performance is no assurance of future performance.” We walked to the bottom of the street, each of us contemplating past and future performance and then headed up the hill on the other side of Ocean Avenue. When came to a restaurant called Portobello which had a number of outdoor tables. We sat at one for awhile enjoying a nice white wine in the afternoon sun. We toasted each other and watched people stroll by. We talked to the two Frenchmen who owned the restaurant who made flattering compliments to the Mademoiselle Lovely Sharon as they sat at the adjoining table.

After lunch we found our car and headed out to find our friend Carol’s house. If you know Carmel you are aware of the winding roads that start and stop and seem to wind in every direction. After many false turns and wrong roads we found the house one street up from the ocean. She was not at home so we left a note.

By evening we were both tired so we found a seafood restaurant (the Fishwife”) near our Norman Bates Motel and had a casual dinner. Then back to the room.

On Thursday we played golf at the Pasadera Country Club which was a few miles up Highway 68 toward Salinas. This course is a Jack Nicklaus Signature course with many golf holes either straight up the hill or straight down the hill. Our golf pro at Ironwood in Palm Desert, talked with the Pasadera pro to arrange our round of golf. No one was ahead of us or behind us during the round so we had plenty of time to hit and lose golf balls and take pictures of the beautiful vistas. After the round while we were trying to figure out how many golf balls we each had lost, Sharon informed me that she had lost the same ball twice. I felt compelled to argue that you could not lose the same ball twice. The first loss was not in fact a loss. If it had been lost, then it would not have been possible to hit that ball again and lose it again. This argument carried no weight with the Lovely Sharon.

After golf we walked down Fisherman’s Wharf in Monterey where we watched and listened to the seals barking. We had clam chowder at a restaurant on the wharf where we had a window seat so we could see the sail boats and motorboats moored at the docks and watch the seabirds fly by.

Thursday evening we went back to Carmel for dinner at Bistro Giovanni. This restaurant was festive and intimate with good food. Most of the patrons were in town for the US Open. We met the Bistro owner who suggested we have one of the wines bottled specially for Bistro Giovanni. After dinner, we went back to our room and watched US Open highlights on TV before falling asleep.

We awoke Friday around 5:00 a.m. for our day at the US Open. I suppose I should say I awoke at 5:00. The Lovely Sharon appeared to be glued to her bed and made strange noises when I tried to nudge her awake. She is not a morning person but she finally asked me what the day looked like outside. Inasmuch as the curtains were still hanging off the rod I was able to look outside without having to open them. When I told her it looked gray and cold outside. She buried her head under her pillow and moaned. We finally left the room and were at the US Open by 7:00 a.m.

We arrived at the Open in a motor coach from the parking lot at the old Fort Ord. As we walked to the gates I can honestly tell you my heart was pounding. I was as excited as a six year old on Christmas morning. We walked passed signs that listed each US Open winner of the last 109 years and each course where the Open had been played. We finally reached shopping heaven- the enormous Merchandize tent that had anything and everything you could imagine, all with US Open 2010 logos. Hundreds of different hats, shirts, jackets, sweaters, bags, coasters, posters, photos, balls. At first we just walked around in awe trying to take it all in. The tent was filled with shoppers, most of whom had joyous looks on their face. Everyone was happy to be at the US Open and happy to be in the Merchandise tent. We were in the tent for at least 45 minutes and bought a number of treasures.

After shopping we headed for the course. Tiger Woods had teed off around 8:00 so we caught up with his group on the third hole. We followed him for awhile but his crowd was enormous and we struck out for less hectic locations. We spent 10 hours on the course, following different golfers, watching action at the 7th hole, 8th hole, the 12th hole and other places on the course. We followed Phil Michelson for a while (he shot 66 that day), and we saw all the big names and many of the small names play this great course. By noon or so the sun came out from the mist and the last half of the day was beautiful, blue sky, green grass, crashing waves. Excitement was everywhere with cheers for great shots and moans for near misses or disastrous shots. We ran into several friends who were at the tournament including friends we were playing golf with on Saturday.

Just after 5:00 p.m. we decided we were worn out and headed for the bus. As the bus took the 30 minute trip back to the parking lot, Sharon and I sat next to each other without speaking, each of us tired and each of us thinking about the day.

On Friday, we played golf at Monterey Peninsula Club’s Shore Course with friends Dick and Arlene. Dick and Arlene are members of the Monterey Peninsula Club and have a wonderful home just off of the driving range. Sharon had played the course before but I had not and it was a thrill to play this terrific golf course. Many of the holes bordered the ocean and the 17 Mile Drive. Every hole was beautiful, with ocean or forest views. Deer grazed on and nearby the course as we played. After golf we went to our hosts’ home and watched the Saturday round of the US Open. 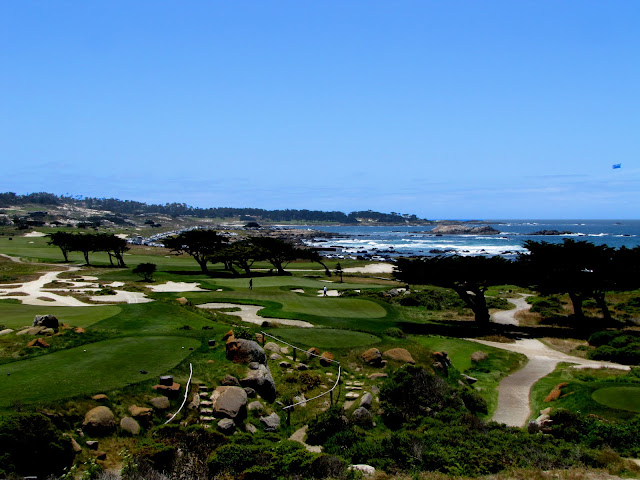 Sunday we packed up, and headed to the San Jose airport. We arrived back in Salt Lake around 4:00 and headed home to watch the last 9 holes of the tournament on TV.

What a wonderful trip, playing golf, watching golf, and spending time with the Lovely Sharon and good friends in one of the most beautiful places on the planet. A lasting memory for me.
Posted by Bud Headman at 5:36 AM