It started with a short phone call on Sunday evening, September 12, 2010. The Lovely Sharon and I had just arrived home from a trip to McCall, Idaho. When I picked up the phone, I was pleased to hear the voice of friend Barry. He told me that he and Nanette had organized a 27 hole golf outing for the next Saturday at Wasatch State Park in Midway, UT. He got about 30 seconds of a description of the planned event out and I broke in (it is not unusual for me to break in- bad habit) and told him to count us in. Barry responded by asking me if I needed to consult with the Lovely Sharon (Barry, like many of our friends, have come to refer to Sharon as the Lovely Sharon). I told him that no, we would play. A brave decision on my part but I was certain Sharon woud be up for an autumn golf outing in Midway. The plan was to meet for breakfast at the golf course, with all six couples who were scheduled to play in the event. Then there would be a 27 hole golf event, followed by dinner in Park City. Who in their right mind would say no to such a plan?

So yesterday morning I awoke around 4:00 am to start my day. Had some coffee, read the online news and packed my camera and a few other things in a large canvas tote bag. My plan was to leave the house around 7:00 am for the hour drive to Midway. For those of you who may not be familiar with Utah, Midway is in the beautiful Heber Valley about 12 miles from Park City. At 6:10 I woke Sharon up in a very romantic and sensitive way. I pulled the covers off of her, squeezed her derriere and told her she needed to drag her butt out of bed. Hey, it seemed romantic at the time. She moaned, opened her eyes for about 2 seconds and said it was still dark outside and no right thinking person would be getting up that early for golf. I encouraged, prodded, threatened and cajoled and she finally promised to get up. After filling up the car with fuel, and getting her coffee at the bagel shop, we headed out.

The morning was beautiful, not a cloud in the sky. As we entered the Heber Valley it was about 8:00. The surrounding hills were aglow with the warm colors of autumn. Reds, oranges and yellows were abundant on the hills and mountains but the dominant color was reddish –orange that was absolutely spectacular. As we drove into the Heber valley, we saw a solitary fisherman wading the Provo River, with thigh high fishing boots, a brimmed hat and a fly rod in hand. It looked like painting of some Americana scene of the West. We turned off Highway 40 to head to the golf course. We passed by cows and horses grazing in fields of yellow in the early morning. As we drove toward the golf course, I was overwhelmed at the beauty of the morning. We were driving west; the entire mountain side was awash in color, beyond the color was the majesty of the rocky cliffs of the backside of Mt Timpanogos. The radio was playing John Denver’s “Annie’s Song” and I was feeling just like John’s words, “you fill up my senses” as the sounds and the sights were lifting my soul. About a mile from the golf course I pulled over got out of the car where I stood taking in the scene and breathing the autumn weather. I took a picture of the mountains in the background and in the foreground steam was rising off a pond in the morning light. After a few minutes I got back into the car and we drove to the golf course. When we arrived at the golf course, I told the Lovely Sharon how I was feeling. She told me that indeed it was beautiful, but that she never really liked “Annie’s Song”. Oh well, back to reality. 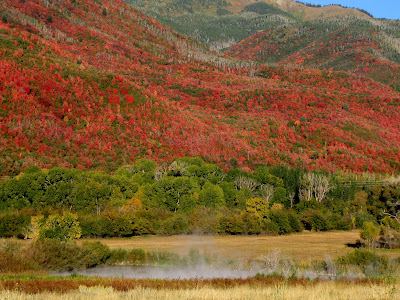 It was a pleasure to eat breakfast with friends, looking out the window at the surrounding mountains and the green golf course. We talked of golf, and weather and things friends talk about. There was Barry and Nanette, Don and Sandy, Mike and Jane, Bruce and Rhonda and Sharon and me. Robyn and Paul met us after breakfast. Finally, it was time to play golf. The 27 hole event was divided into three separate nine hole games, (i) point par with both balls of each couple counting for the score, (ii) better ball with one ball per couple counting for the score and (iii) a scramble of the couple’s best shot on each hole. We played with a different couple for each of the nine hole matches. It was a glorious day where the sky was as blue as could be and the temperature was perfect. The colors were so beautiful it was almost distracting. We saw deer, wild turkeys, geese, and scampering squirrels. The Lovely Sharon and I hit some good shots and plenty of bad shots. At the end of the competition we were not surprised to learn that we took last place in each event. Friends Robyn and Paul played terrific and took first place in each event. 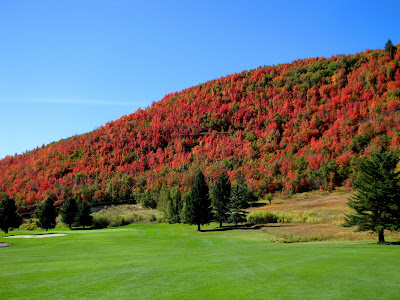 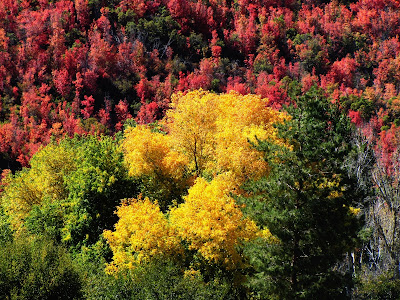 After golf we hurried to Park City for dinner. We were joined at dinner by Mary and Rich and so we had two tables for the 14 of us. We laughed and ate and watched football on the big screen. Barry announced the winners and in as nice as manner as possible informed me that me and the Lovely Sharon were DFL in each event. Around 8:30 we all hugged, kissed cheeks and expressed affection for each other and proclaimed that it had been the most special of days, a day that would be long remembered. . Then we each walked into the night to our separate cars to drive home.

After we arrived home we unpacked the car. When I was finally in my bed for the evening, lying in the dark, I thought of the day, the sights, the companionship and the Lovely Sharon. I must tell you, I was still overwhelmed by it all. I still had a glow inside me and just between you and me, in my mind I was humming and thinking of the lyrics of Annie’s Song.
Posted by Bud Headman at 4:39 PM