Most of my time at home is spent in the Bud Cave.  The Bud Cave is a suite of a bedroom, a bathroom, an office/den and a coffee room where I make coffee every morning.  The coffee room also serves as a storage room. There are a number of shelves in the coffee room that hold mesne supplies, books, financial records and other things. Lately, when I have ventured into the coffee room, my eyes have focused on two hats stored on these shelves.  Each of these hats means something to me; a special meaning.  To see these hats sitting on a shelf, triggers memories, makes me think back to earlier years, and makes me contemplate life. To look at these two hats they don’t appear to be anything unusual or special but they are, they are worth more than money.  Do you wonder how two hats could have special meaning to me? Well here is their story.
The Straw Hat.  One of the hats is is a light colored straw hat with a tan hat band.  Its brand is a Dorfman Pacific.  I don’t know for certain how old this hat is.  I know it is at least 8 or 10 years old, maybe older.  I doubt it was very expensive. It is a functional straw hat that you might see on the golf course.  I know that because that is where I first saw this hat, on the golf course.  This hat belonged to my friend Don Wingeleth.  I am not certain that I ever saw him on the golf course without this hat on his head.  I would suppose that if you saw Don on the course without this simple straw hat you might not have recognized him. Don passed away a few years back.  He was married to our sweet, dear friend Sallie.  They were sweethearts from the time they first met to the time he was gone.  Don and Sallie.  Those three words almost seemed like a single word. One word to describe two people, two people that almost seemed like just one person.  I met Don and Sallie more than dozen years ago standing in line waiting for a Diana Krall concert at the Salt Lake Hilton Hotel.  We were standing in line hoping to get good general admission seats and as we passed the time we started a conversation. We were pleasantly surprised that each of us was a member of Hidden Valley Country Club.  We talked for close to an hour before the concert started.  That was the beginning of my friendship with Don and Sallie. From this chance meeting, we became part of each others’ lives.  I met their children, all of whom were grown and married. We played golf together in Palm Desert and Salt Lake. We dined together and we attended parties together.  When the Lovely Sharon and I married on the 14th hole at Ironwood Country Club on March 21, 2004, Don and Sallie played in the pre -wedding ceremony golf round, watched us get married in our golf clothes and golf shoes and joined us for a celebratory dinner.  Don and Sallie were special friends to Sharon and me.  Three or four years ago, Don got sick, very sick.  Don and Sallie and their family fought his illness for a year in Utah and Texas.  Finally the fight was over and Don was gone.  Sallie asked me to be an honorary pall bearer at Don’s funeral.  What an honor for me to share one last event with Don.  After it was all over, Don’s sweetheart Sallie told me she had something to give me. I wondered what it could be.  You probably guessed, it was the straw hat. When I took the hat into my hands I had tears in my eyes. What a gift for me from Sal. To give me a part of Don’s life, of their life together.  From time to time while my coffee is brewing, I look at the straw hat.  Occasionally, I reach for it and hold it and think about friends, life and death. To some it’s just a hat to me, it’s more, much more. 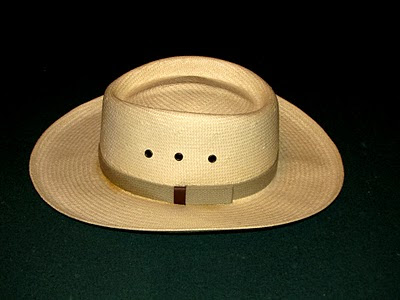 The Stetson
The Other hat is a tan felt Stetson.  My grandfather, Everett Headman wore this hat and others like it for as long as I can remember. He was born in 1902 and passed away in 1978.  He had an active life and served as a Justice of the Peace in Salt Lake County for many years.  He was a lifelong Democrat and I blame my Democratic tendencies on him.  As a boy and young man he hunted and fished.  He was a well known baseball player.  As he got older he played golf.  He loved flowers and was frequently working on the mums with my Grandmother.  Everett had an outgoing personality and everyone seemed to like him. He was fun to be around.  More often than not he had a smile on his face.  When I was a boy he told me stories about political events he organized well before I was born.  He showed me dozens of colorful campaign badges.  He told me tales of conventions, meetings and parties.  He told me of one party where everyone got drunk and tried to ride a donkey.  Apparently most of them were bucked off.  He told me that in the 1920’s he hit a home run at a ball park in the Butler Hill area and the ball rolled down Butler Hill into a barn.  According to his story, the barn was torn down some thirty years later and the ball was found.  He told me he had new car in his garage when my father was a boy and my father somehow set the garage on fire and the new car burned up. According to granddad, the neighbors came over to watch the car and garage burn down. Apparently it was an interesting neighborhood event.   I used to spend a lot of time with my grandparents as they lived next door when I grew up.  After my grandfather died I was given his hat.  I don’t remember who gave me the hat; it was either my grandmother or my father.  But I have had the hat for 32 years.  It is stored in the same hatbox it came in when he bought it.  Maybe once a year I take the hatbox off the top shelf of the coffee room and look at the hat. I hold it in my hands feeling the still soft felt.   It makes me think of playing in my grandfather’s yard, jumping in piles of leaves cutting his law for 50 cents.   It makes me think of sitting on his front porch with my big sister swinging in his front porch swing.
It makes me think of driving in his truck with him.  It makes me think of the day he had some big trees in his back yard cut down.  One of the tree cutters got drunk at lunch and after lunch he went back to work on granddad’s tree.  The worker had a rope tied around his ankle as a protective device.  The next thing I saw was the tree cutter hanging upside down from the tree with the rope around his ankle.  He had fallen out of the tree and the rope saved him from hitting the ground.  I remember laughing but I don’t remember how they got the fellow down from the tree.  I know they got him down because the tree is gone.  That had to be in 1958 or so when I was about six years old. Like Don Wingeleth’s hat, my grandfather’s hat is more than a hat.  It is something than conjures up memories from a period of time when I was 4 or 5 years hold to my grandfather’s death in 1978. So that is the story of my two hats.  It’s a good story for me, a story of warmth, of friends and of family. It’s a story that is a little bitter sweet as it makes me realize there is more of my life behind me than there is ahead of me.  You may have a hat story but your story may be about a quilt, a set of dishes, a photo album or a piece of furniture. It is about some object that is not inherently valuable but an object that causes a flood of memories for you, taking you back to a happy time.
Take the time celebrate your hat stories.
Posted by Bud Headman at 7:38 PM