The Loneliest Highway in America

After a wonderful Thanksgiving week in Palm Desert, I left early the Saturday morning after Thanksgiving to drive back to Salt Lake. My journey from Palm Desert to Las Vegas was my normal route through Twenty Nine Palms, Amboy, Kelso, Cima and then Primm, Nevada. I have described this ride through the Mojave Desert before in this blog (http://www.bheadman.com/2009/10/off-beaten-track.html). It’s a beautiful ride through a desolate but beautiful landscape. After leaving Las Vegas, I made a last minute decision to take a different route home. Rather than take I-15 all the way from Las Vegas to Salt Lake City, I decided to take Highway 93 (the Great Basin Highway) north through the middle of Nevada. I was on this road when I was about 13 years old when my family drove home this way from a boating trip to Lake Meade. That was 45 or 46 years ago. I don’t remember actually taking the drive I just remember we that took it and it seemed to take forever. I have wanted to try this route again but I always seem to be in a hurry to get to Palm Desert from Salt Lake or get to Salt Lake from Palm Desert so I have always saved this ride for another day. Last week I finally took that ride.

About 15 miles on the east side of Las Vegas Highway 93 turns off of I-15 and heads north approximately 200 miles until it intersects with Highway 50. For the most part this 200 mile stretch of road essentially runs through a series of valleys with mountains or both the left side of the road (the Sheep Range Mountains) and the right side of the road (the Meadow Valley Mountains followed by the Delamar Mountains). This 200 mile stretch of road is frequently referred to as the loneliest road in America. There are no cities along the road and only a few small towns and hamlets.

Approximately 70 miles or so up Highway 93 is the hamlet of Alamo. About the only thing I saw there was a truck stop with a small store. The truck stop was packed with cars, pickups and a semi’s. It was the only place to stop for 50 miles or so in either direction. Alamo is near the Pahranagat National Wildlife Refuge, approximately 90 miles north of Las Vegas in Lincoln County, Nevada, is located in the Pacific Flyway, and encompasses 5,380 acres. The name, Pahranagat, comes from the Pauite Indian word meaning valley of shining waters. Established to provide habitat for migratory birds, especially waterfowl, the refuge is a unit of the Desert National Wildlife Refuge Complex. More than 230 different species of birds use refuge habitats. 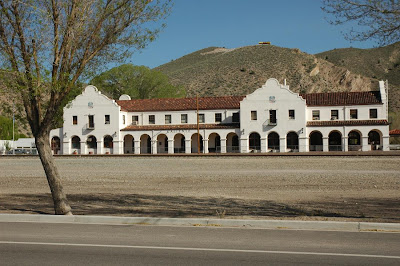 Some 25 miles or so from Caliente is the mining town of Pinoche.  This town may be called ghost town by some but there are an estimate 800 people living there.  Here is some information from the town's website:

In 1864, William Hamblin, a Latter Day Saint missionary, was led to silver deposits in the vicinity of Pioche by a Native American Paiute. In 1868, San Francisco financier Francois L.A. Pioche purchased claims and constructed a smelter in the area, forming the Meadow Valley Mining Company. The mining camp was called "Pioche's City" and later became known as Pioche. The town rapidly became the largest mining town in southeastern Nevada in the early 1870's. Population estimates showed 10,000 people by 1871.  One of the worst fires in the West took place in Pioche in 1871. It began in a restaurant during a celebration commemorating Mexican independence and quickly spread. When it reached the Felsenthal Store, a stone fireproof structure where 300 barrels of blasting powder were stored, the subsequent explosion shot nearly 400 feet into the air, blowing a 1,000-pound door clear out of town and showering the town with flaming debris. The explosion of debris killed thirteen and injured forty-seven, and the accompanying fire left virtually the entire population homeless.  he fortunes of Pioche diminished in the 1880's due to the shutdown of the principle mines in 1876. During World War II, an economic boom occured when Pioche was the second largest lead and zinc producer in the nation. Present day Pioche has little mining activity, and in being the county seat, the main focus is now government. 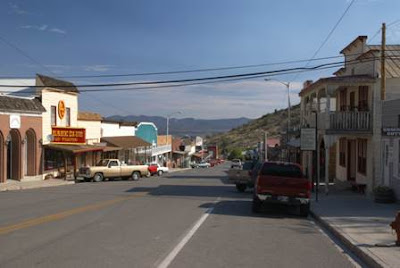 After my escursion through Pinoche. I got back on Highway 93 and continued on some 90 miles through the desolate Lake Valley where I finally reached Highway 50.  If you turn left onto Highway 50, it is 30 miles to Ely. Nevada.  If you turn right, which I did, you head toward Great Basin National Park, the Nevada-Utah border and Delta, Utah.  This was truly a beautiful, lonely highway. It was about 30 miles to the Utah-Nevada border. There is nothing at the border but what appears to be dozens of miles of unoccupied land in all directions.  This land must look like it looked 150 years ago when the pioneers were heading to California.

When I reached Delta it was dark and cold.  I stopped for gas and a burger.  From there I drove on in the dark to Nephi, Utah which I reached during the town's Christmas parade.  It took about 15 munutes to get around the parade and get on Interstate 15 which took me home.

The trip was at least 2 and 1/2 hours longer than my regular trip but it was truly a memorable drive through a part of the west that is still unsettled. Beautiful mountains and valleys, antelope grazing and hawks flying overhead.  I probably won't get back to the road again, but maybe I can talk the Lovely Sharon into sharing this adventure with me sometime.

Expand your horizons and get off the beaten path sometime.
Posted by Bud Headman at 11:58 AM