A Ride On the Pony Express Trail

I love to take a drive on a road that might be best described as “off the beaten path”. Such a road might be paved, it might be dirt or it might be gravel but its intrigue to me is that it traverses through interesting terrain and does not go through populated areas. In December 2004, the Lovely Sharon had some type of ladies event on a Saturday afternoon. We were in Utah and although it was December, there was no snow on the ground. As the Lovely Sharon was planning to attend her ladies event, I tried to figure something interesting to do on my own. I recalled that my friend and law partner Vern had told me about a road, a dirt and gravel road the meandered from south of Tooele, Utah to the Nevada border. Vern had taken this road several times before and has taken the road several more times since that time. He told me that you needed to take at least two vehicles because there was a great chance for flat tires many miles from a gas station. On the Friday night before Sharon’s Saturday ladies event, I decided to take Vern’s gravel road and I decided to go on my own.

I woke up early that day, the first Saturday in December, and started my journey around 8:30. I drove south  on I-15 and got off of I-15 in Lehi, Utah at the Lehi Roller Mills exit. I drove west on Highway 73 past Cedar Fort and Camp Floyd. Highway 73 turns to the northwest at Fivemile pass but at that point I left Highway 73 for Faust Road for the 10 mile paved road drive to the hamlet of Faust. A mile or so past Faust, the pavement ended and my gravel road journey started.

The road I was to take over the next several hours followed the Pony Express Trail and parts of it were on the Old Lincoln Highway. If you ever have a chance read about the Lincoln Highway. The Lincoln Highway spanned coast-to-coast from Times Square in New York City to Lincoln Park in San Francisco, originally through 13 states: New York, New Jersey, Pennsylvania, Ohio, Indiana, Illinois, Iowa, Nebraska, Colorado, Wyoming, Utah, Nevada, and California. In 1915, the "Colorado Loop" was removed, and in 1928, a realignment relocated the Lincoln Highway through the northern tip of West Virginia. Thus, there are a total of 14 states, 128 counties, and over 700 cities, towns and villages through which the highway passed at some time in its history. The first officially recorded length of the entire Lincoln Highway in 1913 was 3,389 miles.

A few miles down the gravel road I came to the Faust Pony Express site. There is no longer a building here, only a marker. The station was a two-story stone structure. A change of riders took place and the mail stage stopped for rest breaks at this station. My first stop was at Lookout Pass. The pass is in the hills on the west side of Rush Valley. There was also a pony express station here but like the Faust Station it is long gone. I got out of my car here and took a photo looking west to the desolate Skull Valley. 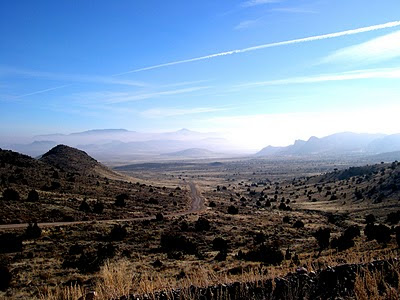 Sixteen miles from Lookout Pass was the Simpson Springs pony express station. This station was named after explorer Captain J.H. Simpson who stopped here in 1858 while searching for an overland mail route between Salt Lake City and California. It is one of the most dependable watering points in this desert region. George Chorpenning established a mail station at this site in 1858, which was later used by the Pony Express and Overland Express. A number of structures have been built and destroyed in the vicinity of Simpson Springs over the years. The restored structure is located on a building site which dates to the period (1860) and closely resembles the original. I got out of my car here and walked into the old stone station. I took a photo and I watered a sage brush. As I looked around at endless miles of still unpopulated territory I wondered what kind of man would choose to live out here by himself or with a family to service pony express riders and stage coaches. 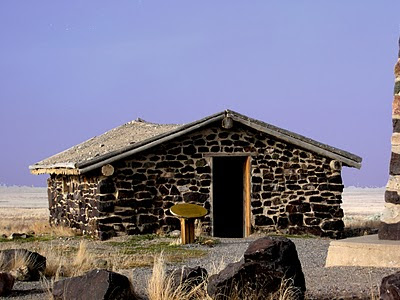 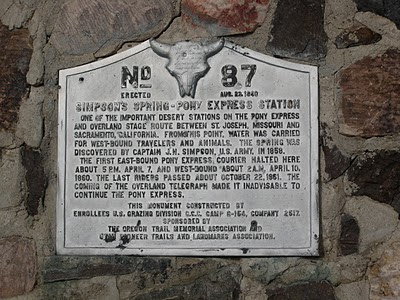 Over the next twenty miles or so, I passed two or three more markers memorializing several more pony express stations that had long ago disappeared as though they had never been here.  As I drove to the southwest, the road curved around the Black Rock Hills. It was here that the Old Lincoln Highway joined the pony express trail. 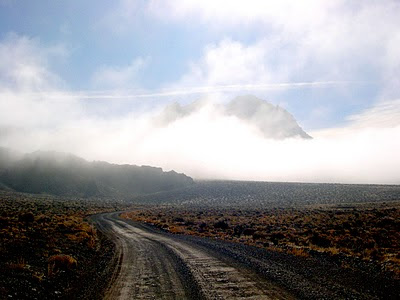 “The area that now comprises the refuge was once enveloped by an enormous inland lake know today as Lake Bonneville. This great body of water rose and fell several times during its 16,000 year existence. The prominent shorelines where water levels stabilized for extended periods are visible on the mountains in the area. When Lake Bonneville was at its peak level, the water in the area that is now marsh would have been nearly 850 feet deep. The lake declined to a level below the present marsh level around 14,000 years go. Fish Springs national Wildlife Refuge was established in 1959. It is named after the native fish the Utah chub. The refuge covers 17,992 acres with a 10,000 acre marsh system. Water is supplied by 5 major springs and several lesser springs and seeps. Fish Springs provides vital habitat for migrating wetland birds. Many of those species remain to nest and raise their young. Generally, mid-April and late September coincide with the peak of the annual spring and fall migrations. The refuge has a very rich cultural history. The area's first inhabitants were Paleo Archaic natives about 11,500 years ago. Modern inhabitation dates back to 1861. The historic Pony Express Trail runs along the edge of the refuge, and a Pony Express station was established here. The marshes of Fish Springs NWR are truly an oasis in the desert. Several springs, fed by underground water that fell as precipitation thousands of years ago, provide important breeding, migrating, and wintering habitat for a diverse array of birds and other wildlife.”

Leaving the Fish Springs area I headed west to the hamlet of Callao, Utah. Callao is west of Fish Springs and north of Trout Creek, on the old Overland and Pony Express route south of the Gold Hill Mining area. In 1860, the Pony Express established a station known as Willow Springs at a time when gold was discovered in nearby Gold Hill. In 1870, E. W. Tripp, his wife, and small son established a ranch there. In 1895 the name was changed to Callao because there were several places named Willow Springs that were previously established in the territory. An old prospector who had been to Peru imagined a resemblance to Callao, Peru and suggested the name. For a while the old Lincoln Highway passed through Callao. Today about twenty seven residents live in Callao and it is the last town in Utah to use a one-room schoolhouse. I took a picture of a gas pump in Callao. I imagine there has not been much change to the the hamlet in the last 100 years. It was an interesting feeling being in Callao. I saw a few dogs, some chickens, cows and a couple of horses but I never saw a person. There was no store here and I saw no commercial buildings. 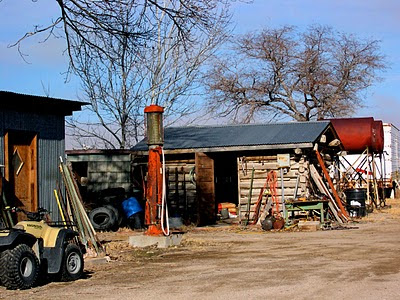 After Callao the road turned north to Gold Hill Utah. I found the following description about Gold Hill on the internet:

“ Located deep in Utah’s west desert near the Nevada border is the famous mining camp of Gold Hill. The town established in 1892 was named after a gold bearing mountain just east of the town. Gold Hill became famous for its location of many minerals including silver, gold, copper, lead, tungsten, and arsenic. The town boomed and died several times in its existence. The first boom lasted for a decade until its richest mines were worked out and the town was nearly abandoned. During World War I arsenic was badly needed and Gold Hill was just the location to find the mineral. The mines were reopened and new mills built, and in 1917 the Deep Creek Railroad was built into Gold Hill. When WWI ended arsenic was no longer needed and the town once again died. WWII reawakened the town due to the high demand of tungsten used in steel and electric filaments. Tons of the mineral was shipped out until the need slowed and Gold Hill dwindled once again. In 1940 the last train rails were tore up and sold for scrap. During the 1940’s several mines were reopened and were mined for arsenic. This was only temporary and in 1946 the schoolhouse was locked for the last time and the post office was finally closed in 1949, adding Gold Hill to the list of Utah’s ghost towns. In its history the town boasted a population of up to 3000 people.  The town had salons, stores, pool halls, a post office and even a newspaper (The Gold Hill News). Today many structures still stand allowing you the opportunity to view into the towns past. If you visit this area please respect private property and come prepared. This town is in a very desolate location far from any services and help. Take plenty of water, food, gas, spare tire, cell phone etc.”

After Gold Hill and another ten miles or so of a gravel road, I finally was back on a paved road, the Ibapath Road. I felt a little more secure after reaching the pavement. I had just spent 4 or 5 hours on gravel in a desert wilderness where I had never been. Every turn of the road brought a new sight. I was still in Utah but after a few miles the Ibapath Road crossed the border into Nevada. I headed north and reached Wendover. Here I got Interstate 80 and drove east to Salt Lake City.

The gravel road journey that I had just taken was truly memorable. It was a geographical area of solitude and appropriately, I took the drive by myself. I never saw another human. I saw birds and antelope but no people until I reach Gold Hill. It made me think about the pioneers and pony express riders of 140 years ago. How difficult life must have been. Our life would be unbelievable to these hardy folks. Planes, telephones, cars, television and internet. I am happy to  live in the time that I do, but it was nice to take a drive through the past..

Get Off the Beaten Path sometime and contemplate times past.
Posted by Bud Headman at 11:03 AM