Yesterday was my dear mother’s birthday. She was born 83 years ago on October 8th in rural Louisiana to Newton and Mary Ficklin.  She was the little sister to five brothers and one sister.  She moved to Utah in 1945 with her parents and some of her siblings. She has always referred to Louisiana as “back home”.     She married my father in 1948.  My mother is an interesting person and always has been.  She has always been active in associations of many types.  In the 1960’s, together with my father and my  aunt and uncle, she formed a bowling league.  I don’t mean she formed a team, she formed an entire league.  They called it the Mardi Gras league and it was in existence for many years.  Every year at the time of Mardi Gras, all of the league members wore costumes to bowling night and bowled in their costumes.  Usually one of the local TV stations would come to their costume bowling night and film the action for broadcast on the news. She was a good bowler and was the league women’s champion for more years than one.  She also bowled in ladies leagues.


My mother was the president of a local and the Utah State garden association.  She was a relief society president.  She was on numerous committees.  She was asked to be on committees and in associations because she was a person who got things done.  I pride myself on being self-motivated and a person who gets things done, but I attribute that trait to my mother and father who were both that way.
My mother is fun.  Not everyone is fun but she is and has always been. People genuinely like being around her. She was always up for an event or activity. She played bridge and still plays bridge. When I was a boy, she would shoot baskets with me, play tetherball, play ping pong and do so many other things with me. I do not believe I have ever beat her in ping pong.


She volunteered countless times throughout her life for organizations, charities and just to help neighbors.
Yesterday on her birthday she met another lady at the theater to see an afternoon play.  She has always loved plays and musicals and has attended hundreds over the years at the University of Utah, the Grand Theater, the Hale Theater, the Capital Theater and even in New York the couple of times she traveled to New York.


My mother has always loved to learn.  She taught herself the basics of Spanish and for many years, to my amusement, she carried an English-Spanish Dictionary in her purse.  I always wondered if she ever pulled her dictionary out of her purse to ask a Spanish speaker person some question.   “Senor, por favor me puede decir wheer que es el cuarto de baño?”  (Mister, please can you tell me where the bathroom is?)
My mother has always loved to travel. When I was a boy we never had any money but we always went places.


More important than my mother’s activities and her joy for doing things and being involved in activities, she is a good person; a very good person.   She taught my sisters and me honesty and she taught us kindness.  She taught us to be helpful to others, whether they were people we knew or people we did not know.  She has a spiritual side but has never been one of those persons who believed her beliefs were the only right beliefs.  She went to church but was never a sheep that followed anyone or any dogma blindly.
She was never afraid to express her opinion on any matter, political, religious or any current event.  I learned that from her.  My little sister Tanya is the same way.


At 83 she is still interested in the world around her.  She will call me from time to time to ask me a question about things going on. She called me once and asked what the Tea Party deal was about.  She will call and ask me what I think about something that is going on internationally or nationally. She asked me why some people are so upset and hateful toward gays.  She has never been one to condemn or be judgmental toward a person because of that person’s beliefs or actions, unless that person was mean or hateful.
I have gone to Mormon Church and I have gone to Catholic Church and have l learned good things at both churches and I disagree with some doctrines of both churches. There is a place in my life for religion but there is a bigger place in my life for the spirituality of trying to be a good person. I try, but for those who know me, you know I am not always successful in this endeavor.   As I look back at my life, I realize that I did not need church to teach me the golden rule or to teach me to be honest or to teach me to be kind.  I was taught those things at home.  The teachings at home were conveyed by words but more importantly, by the actions of my parents


My mother has always taken care of her family.  In 1966, my 16 year old sister died of cancer after a battle of more than a year.  For that entire time my mother was by my sister’s side.  During the long stays in the hospital, including the last five months of my sister’s life, my Mother was at the hospital 15 to 18 hours a day.  When she left the hospital after a long stressful day, my father would replace my mother at my sister’s bedside.  My father has had health issues for 20 years and my mother has been his care giver.  Sometimes she has been overwhelmed by the things and events she has had to deal in her life with but she has never given up.
My mother has always expressed love to me and my family.  How important it is for each of us to hear the words “I love you” from our spouse, our children, our parents and our friends?  I am not sure I can remember ending a conversation with my mother or leaving her house that she did not say I love you.  Yesterday when the Lovely Sharon and I were leaving my mother and father’s house, my boyhood home, she told me she loved me and she told Sharon she loved her. These words are not some mantra or habit that carry no meaning, like saying amen at the end of a prayer, but these words have meaning and  are important to my mother and they are important to me. 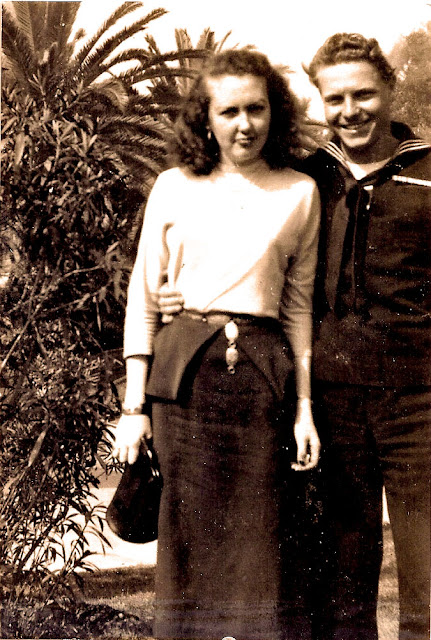