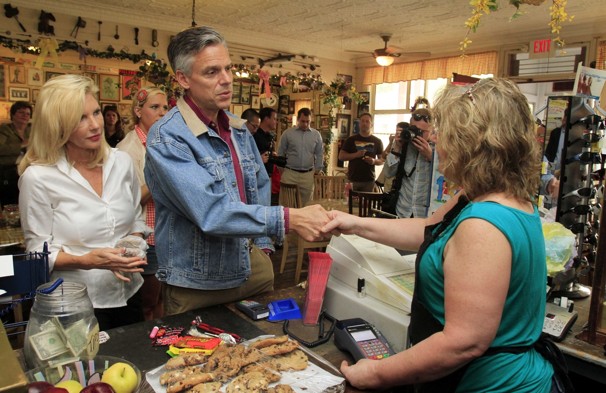 If I was supreme allied commander of all things politics I would “arrange” for Jon Huntsman to be the 2012 Republican nominee for President. Why you ask?
First and foremost, he is not a right wing crazy.    At Republican debate at the Reagan Museum he said:
"When you make comments that fly in the face of 98 out of 100 climate scientists, to call into question the science of evolution, all I am saying is that in order for the Republican Party to win, we can't run from science," Huntsman said. "By making comments that basically don't reflect the reality of the situation, we turn people off."
“To be clear. I believe in evolution and trust scientists on global warming,” read a tweet from his personal account. “Call me crazy.”
According to the New York Times, the tweet puts him in direct conflict with both the conservative base and presidential candidate Rick Perry, who has said both that evolution is “just a theory that’s out there and that climate change is based on data that has been manipulated by scientists.
Second he looks at things in more of a reasonable rather than solely partisan manner.
He accepted this past summer’s debt ceiling compromise was appropriate.
He has express support for civil unions
He does not advocate “curing” gay people
His campaign is not one of personal attack
His political donations history reflect donations to republicans and democrats
Third, he is informed and Experienced.
Unlike Herman Caine, he knows that China has had nuclear weapons since the 1960’s.  He served in a number of mid-level and later higher ranking jobs in Republican administration. He was Deputy US Trade Representative and US Ambassador to Singapore. He was elected Governor of Utah in 2004. He was re-elected with a huge margin in 2008. And then he left that job to accept the important post of US Ambassador to China offered to him by President Obama. The Senate approved his nomination unanimously.
Fourth, He as Personal Integrity.
He has changed his positions on some issues, who hasn’t?  But when he does change his position he it appears that he has had a true change of personal views on the issue rather than swaying in the wind for political expediency.  There is a difference between a change of personal opinions and being a flip flopper.  There is no merit or virtue in refusing to modify positions to reflect a true change of heart or being educated as to the true facts.
Unlike some of the current Republican nominees, Mr. Huntsman has not been accused of sexual abuse.  He has not dumped wives on their sick beds for current mistresses.
Fifth. He has a proper View (according to me) of Afghanistan
In last night’s debate he said:
“I take a different approach on Afghanistan," he said. "I think it's time to come home. I say this nation has achieved its key objectives in Afghanistan: We had free elections in 2004, we uprooted the Taliban, we have dismantled Al Qaeda, and we killed Osama bin Laden." "I say this nation's future is not Afghanistan," he said. "This nation's future is not Iraq. This nation's future is how prepared we are to meet the 21st century's competitive challenges. That's economics, that's education. I don't want to be nation-building in Afghanistan when this nation so needs to be built."
I completely agree with that sentiment. I think we should turn off the light in Afghanistan immediately and bring the troops home.  No more American deaths, no more American injuries, no more American money spent in Afghanistan
Conclusion
ith all of that said, I don’t think there is a chance in hell that Mr. Huntsman will be the Republican nominee.  The ultra- right wing, so called “Christian Right”, will not permit it. Mr. Huntsman is not crazy enough, right wing enough or uniformed enough to be the Republican nominee. One of Rick Perry’s   supporters (a religious right Pastor) has called the Mormon Church a cult and most of the Religious right agree.  The same Pastor called Catholics a cult.   I guess I am a double cult member since my heritage is Mormon and the church I now attend with my dear wife, is Catholic.
﻿
Posted by Bud Headman at 8:09 AM