This Stuff Bounces All Over Like a Ping Pong Ball

I have not written for a while and this entry is a potpourri of random thoughts.


1.  Last night I had a wonderful dinner with my Hidden Valley Country Club men’s golf group.  I have written before about these wonderful men and dear friends.   Wives joined the men last night for a festive dinner.  Unfortunately, the Lovely Sharon is in Palm Desert so I attended the dinner on my own.  We had dinner at an American Legion hall that I had never been to.  It is a blue collar facility that serves great steaks in a festive Christmas atmosphere.  The place was packed.  There were about 17 of us in our group and we talked, sang karaoke and just had a wonderful time. Our pal Steve got hold of the karaoke mike and it was impossible to get him off of the floor.  At one point, he even had three young women (not part of our group) acting as his backup singers.  Steve, and his wife Cathy are dear friends and wonderful people.  Cathy just started a new blog, check it out
http://anomelettetwoglassesofwine.blogspot.com/
2.  Although I am not a huge Mitt Romney fan, today’s New York Time Magazine had a pretty good article about Mitt. Look at   http://www.nytimes.com/2011/12/04/magazine/mitt-romney-bot.html?ref=magazine
3.  Only in Utah (from the Salt Lake Tribune):
Utah duck hunter shot in buttocks by his dog
By Bob Mims, The Salt Lake Tribune.  Published: November 30, 2011 02:05PM

There’s probably not a whole lot more humiliating than being shot in the buttocks by your canine buddy. Box Elder County Sheriff’s Chief Deputy Kevin Potter says that’s what happened at the Bear River Migratory Bird Refuge while two duck hunters were getting set up for a morning on the water.

"One of the hunters was inside the boat with the dog, and the other hunter was in the water,” Potter said. “The guy in the water had put his 12-gauge shotgun across the bow of their boat.”


It turned out to be a doggone recipe for a painful end to the day’s outing.
“The dog got excited, was jumping around inside the boat and then it jumped on the gun. It went off, shooting the [decoy setter] in the buttocks,” Potter said.
The wounded hunter was transported to Brigham City Community Hospital about 9 a.m. Sunday, where doctors removed the bird shot and released the 46-year-old Brigham City man to nurse his wounds — and pride.  The dog and any ducks within range at the time of the accident were uninjured.
4.  I am going to read Noel Coward's play "Private Lives", a 1930 comedy.  I don't know what made me want to read the play but I am going to track down a copy and read it. 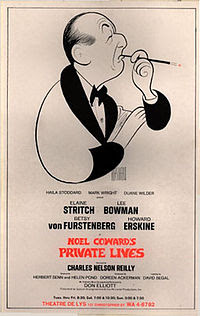 5.  I like Guitarist Stevie Ray Vaugh who tragically died in a plan crash in 1990.  I have some buddies in Chicago who attended his last concert. Check out the following vido clip of his terriffic Pride and Joy -
http://www.youtube.com/watch?v=NU0MF8pwktg