I just read the following news article on Huffingtonpost.com


DAVOS, Switzerland — Three topless Ukrainian protesters were detained Saturday while trying to break into an invitation-only gathering of international CEOs and political leaders to call attention to the needs of the world's poor. Separately, demonstrators from the Occupy movement marched to the edge of the gathering. After a complicated journey to reach the heavily guarded Swiss resort town of Davos, the Ukrainians arrived at the entrance to the complex where the World Economic Forum takes place every year. With temperatures around freezing in the snow-filled town, they took off their tops and tried to climb a fence before being detained. "Crisis! Made in Davos," read one message painted across a protester's torso, while others held banners that said "Poor, because of you" and "Gangsters party in Davos." Davos police spokesman Thomas Hobi said the three women were taken to the police station and will be released later. 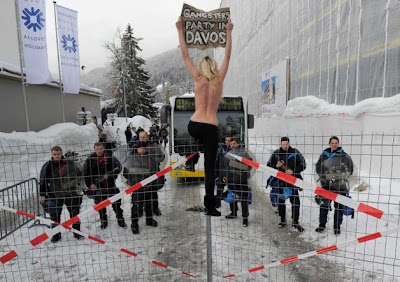 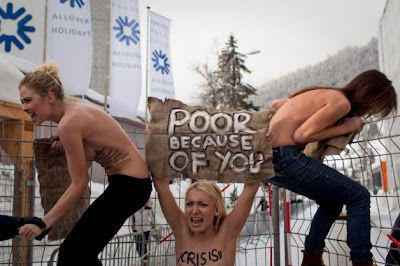 Here’s another article from CBS Los Angeles
PETA’s latest stunt is making a sudsy mess and captivating drivers in Hollywood. Our cameras were rolling when a distracted motorist caught a glimpse of PETA’s naked beauties and plowed into the car in front of him. The girls are baring it all and showering in public to promote a Vegan lifestyle. PETA says by giving up just one pound of meat, Americans can save up 2,463 gallons of water – or six months of shower water."

There have been many topless PETA protests all over the world

Another Protest:  During the 2007 Presidential Campaign, a number of women took their tops off at a Hillary Clinton campaign event to protest the war in Iraq. 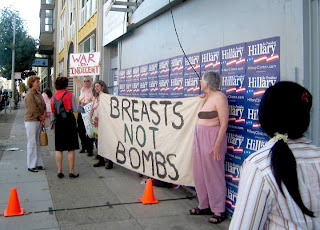 I for one salute these protests.  Americans have a long history of protest:  the revolutionary war, a woman’s right to vote, the Vietnam war, high gasoline prices and on and on.  Protest can be an effective tool of change.
I encourage all women to protest something at least once a month.  If you are a slob at home, your wife should protest, yep, you got it, by taking her top off.  If a woman is outraged because the price of red bell peppers is too high as compared to the price of green bell peppers, protest- baby- protest. If you play too much golf and cards with the boys, that should result in another protest.  If you watch too much football on TV: 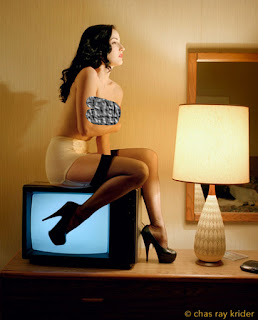 I could go on and on as to what are proper causes for a protest, but frankly, I have no limitations; almost any cause would be worthy of a topless protest.
I am certain the Lovely Sharon wlil not like this blog entry.  I no doubt will get in trouble with her.
Hey!! Maybe she will protest it.
Posted by Bud Headman at 6:04 AM