The changes in plans and the rhythms of life can be abrupt and unsettling. I had planned to spend most Easter week in Palm Desert with the Lovely Sharon. Our plans included golf, a couple of parties and Easter dinner with friends. Instead, we spent the week in David City, Nebraska, a lovely small Midwest town of 2,500 people.  The Lovely Sharon’s beloved father passed away early Sunday morning, April 1st.  Sharon flew to Nebraska from California on Monday and I left Salt Lake City for Nebraska on Tuesday.  I arrived in David City shortly before Tuesday’s viewing and Rosary.  The funeral was held Wednesday at David City’s beautiful St. Mary’s Church. The funeral was a lovely service with meaningful Bible readings, a soft spoken, a plain spoken homily and a beautiful singing of Ave Maria.  Family member Steve recited thoughts and memories of the family. 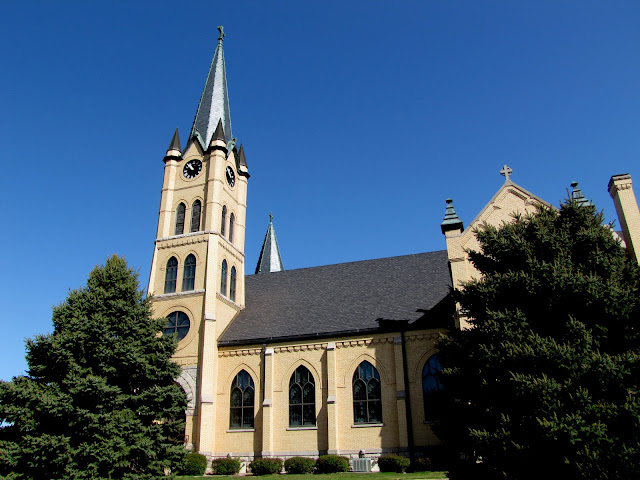 After the cemetery service and a meal for friends and family, the family gathered back at the family home where stories were told and memories shared. Sharon’s mother and father are now both gone but their lives and lessons remain alive in Sharon and her brothers.

This was my fifth trip to David City since I have known the Lovely Sharon.  This trip felt different to me than the previous trips.  I don’t know why it felt different but I felt more connected with her family, including extended family and I felt more connected to rural Nebraska. In the days following the funeral there was much to be done by Sharon and her brothers.  There were estate matters to discuss among the family, and a meeting with the estate lawyer.  There were thank you notes to be written for those who had generously provided flowers, food and other offerings.  Sharon and her brothers started the sad task of cleaning out her mother and father’s home; deciding what to keep, what to donate and what to toss out.
In an effort to be somewhat helpful while Sharon and her brothers made decisions and worked on the house, I ran a few errands under the direction of the Lovely Sharon.  I took a load of food to the David City Senior Center, a long building in the center of town where Sharon’s father had played cards, ate lunch and spent time with friends.  I spoke with several seniors who expressed affection for Sharon’s father remarking he was a fine fellow and a good card partner.  I took several large garbage sacks jammed-full of expired foodstuffs to the landfill.  I took fresh flower arrangements to the St Joseph assisted living facility.  Hopefully the beautiful flowers brought some happiness to those folks. We shipped Sharon’s mom’s dishes to Salt Lake and we took 12 or 13 bags of clothes to Good Will.

On Thursday, I drove a huge, blue New Hollander tractor on the family farm.  I had never been on a tractor and here I was driving one through the fields.  Sharon’s brother, Bob, backed the tractor out of the equipment building and then I took over under his direction.  When I drove back to the equipment building I had assumed and hoped that Bob would take the controls and drive the tractor into the equipment building, but he instructed me to drive through the huge door without crashing into it and without hitting other farm equipment stored in the building.  I was nervous as I slowly maneuvered the large tractor through the door, around green farm equipment to its final resting place. With good instructions from Bob, I disengaged the transmission, reduced the throttle and finally turned the key to stop the engine.  It was fun.
We walked around the yard at the old family farmhouse.  I took a few pictures of Sharon, her brothers and the farm. 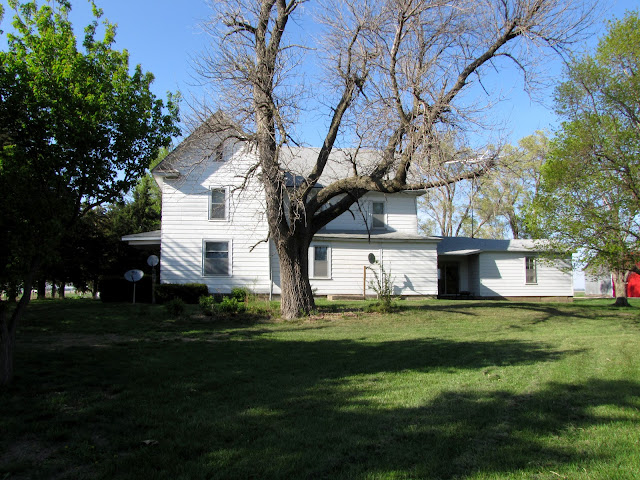 On Friday I went to the senior city a second time to drop off 12 or so jigsaw puzzles.  When I walked in to the senior center I was pleased to see an elderly gentleman putting a jigsaw puzzle together.  As soon as I entered music filled the air.  I had walked into something I had never seen before.  There sitting before me on taupe colored metal folding chairs aligned in a circle were 10 men and women each playing an accordion. The accordion players familiar polka music was accompanied by the um pah pah of a tuba. Accompanying the music was the rhythm of a set of drums.  I had to look twice to full appreciate the 80 something year old lady sitting astride a stool with her right foot pounding the base drum and her hands deftly handling drum sticks attacking the snare drum and the top hat drum.  I stood and listened for two songs.  I could not quit smiling in appreciation as I finally left the senior center.
I volunteered to mail the thank you noted. I went to the post office to buy stamps, affix the stamps to the envelopes and mail them.  I arrived at 11:00 and found the post office open but the counter closed until 11:30.  I meandered through the town until 11:30 and went back to the post office.  I had some 50 envelops to mail.  The post office desk clerk said she would help me put the stamps on the envelopes so we split the envelopes and talked as we put the stamps on the envelopes.  When we finished, I gave her my pile which she joined with pile and we said good bye.  I don’t believe I have ever had a postal clerk help me put stamps on a stack of envelopes.  It was nice.  It was small town.  When I told the Lovely Sharon about it she wondered aloud why we had not asked the clerk to help write the thank you notes.


Sharon and her brother Ed spent most of Thursday and Friday working together at the house.  I tried to stay out of their way so they could have some one on one time together. Brother and Sister working side by side in their parents’ house. I know they both enjoyed being together


Friday night we drove to Columbus and had dinner with Bob and Amy and Steve and Carol (Sharon’s cousins).  Dinner was superb and the conversation interesting.  What a wonderful evening. We talking about pie making, we talked about books and book clubs and we talked about farming and the farming co-op of which Bob is the general manager. It was after 10:00 pm by the time we arrived back in David City.


I started the coffee brewing at 6:15 Saturday morning.  I tried to be quiet as the Lovely Sharon had fallen asleep on the couch in the family room and spent the night on the couch but the kitchen light and the sounds of my early morning movements in a quiet house woke her up at 6:30.  I poured her a mug of coffee and made us scrambled eggs and toast.  I am pretty certain that she would have preferred to sleep a little longer.  She worked a little more in the house but we finally left the house around 11:00 for one more drop off at the Senior Center (my third trip in three days) and we dropped off some donations at the St. Mary Church rectory.

There was something I wanted to do.  I wanted to visit the towns of Bruno (population 112) and Abie (population 108) located 12 and 15 miles from David City.  These are old, I mean really old, country towns.  It is sad to see the abandoned banks and shops in each of these towns. Many of these buildings are almost 100 years old.  The first time I visited Nebraska with Sharon, about 15 of us went to Bruno to a bar for dinner.  I think it was the only business open in Bruno.  We passed the bar on our Saturday journey and then drove through a few of the gravel streets of town.  Although there a reported four more people in Bruno compared to Abie, there seemed to be a little more life in Abie than Bruno.  A little more life, not a lot more.  Bruno had a pretty Catholic church from 1917.  For a town of 108, the church was truly lovely inside and out.  We spent 10 minutes or so in the Church.
Bruno Shed 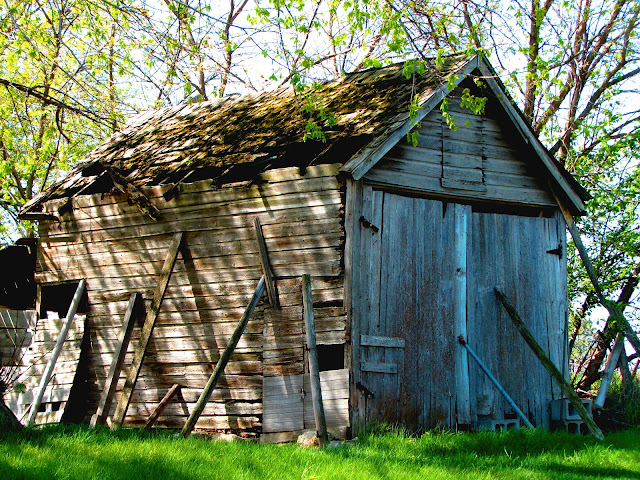 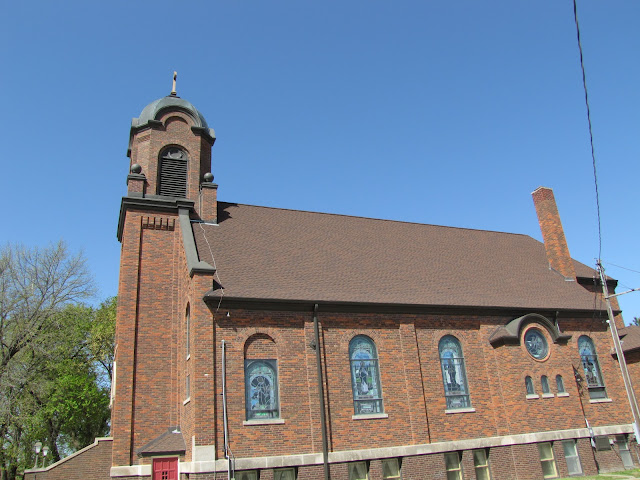 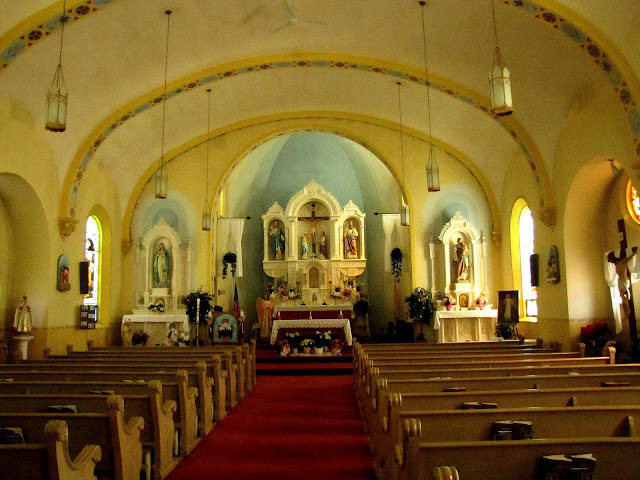 After Abie we back tracked to Bruno and a few miles from Bruno we turned off the road toward Prague.  Prague (population 346) is gigantic compared to Abie and Bruno.   We drove through Prague and stopped at St John the Baptist Church.  The Church was relatively new (circa 1983).  We walked into the Church and spent a few minutes looking around.  The parish priest saw us and visited with us for 15 minutes or.  He was a nice looking, friendly 45 year old man who new Sharon’s parents and her brother Bob.  We have a nice visit with him.  There was one of those “it’s is small world” moments when he told us his sister lived in Salt Lake City for a while. It took us 30 minutes or so to get back to David City.  It was a nice day.
Posted by Bud Headman at 7:25 PM