Two days ago I was sitting in my law office contemplating how to word a particular concept for a contract for a business transaction when my receptionist called me and said I had a phone call.  Much to my surprise and delight, my old pal Mike was on the phone. I am getting to the age where all my pals are old pals regardless of how long I have known them.  However, this old pal is truly an old pal. We have been friends since we were both15 or 16 years of age, almost 45 years. We played high school football together, we sang in the madrigals and we were in student government together.   Mike was calling from the airport in Minneapolis and was on his way to Salt Lake.  Mike’s daughter was graduating from BYU and he was on his way to attend the ceremony.  He was calling to see if we might meet for lunch or dinner during his three day stay in Utah.  We both checked our calendars and settled on meeting Friday night for dinner.  We agreed to meet at Hidden Valley Country Club.  Last night, the appointed night for our dinner, I was just leaving my house when my phone rang.  It was Mike.  He told me he was on his way from BYU but traffic was heavy and he would be late.  I told him no problem I would see him at the Club when he arrived.


I left for the Club.  When I walked into the grill room I saw friends Pat and Teach sitting at the far end of the grill with their son so I walked over to greet them.  As I was talking to them, I became aware of someone very small at my feet.  I looked down and there was my beautiful granddaughter Kendall Marie.  She was looking up smiling at me. Kendall is going into her third year and she is a doll.  Seeing her so unexpectantly was like getting a special Christmas present.  I was overjoyed.  I looked around and spotted my daughter-in-law Ali sitting at a table with friends.   Eventually, I made my way to a table where I sat waiting for Mike.  The grill was packed and so may golf friends saw me and came to my table to say hello and give me a hug.  All of them asked about the Lovely Sharon and I told them she was still in Palm Desert.


As I waited for Mike, Kendall kept coming over to my table to sit on my knee.  She wanted me to put some of the bottled table snacks in my hand which I did.  Then she would pick up each little spicy peanut, sunflower seed or whatever else was in the mix and eat it.  These snacks are good but are salty and spicy. After eating 7 or 8 of them she told me she needed a drink of my water.  We sat and talked while she was eating the snacks.  Then she would say she was going back to see her mommy.  She left my knee and was gone.  But within 5 or 6 minutes she was back on my knee and we proceeded to repeat me pouring a few snackies in my hand, her eating them one at a time, and then me giving her a sip of water. This was as much fun as an old guy could have.  I could have done that all night long.  You grandpa’s out there know exactly what I mean. The simple things in life truly are the best things


Mike finally arrived and we greeted each other with the embrace of old friends.  I last saw Mike in June 2011 when we both attended our 40th class reunion.  It was so nice to see him again.  Mike is a wonderful fellow.  He was always serious about things (in a good mature way), he is smart, he set goals, and he accomplished goals. After high school Mike went to the Air Force Academy in Colorado Springs, and then flew jets in the Air Force for several years before becoming a commercial airline pilot; first for Northwest Airlines and now for Delta.  Like all of us he has had his bumps in life but has survived and is the same great fellow I knew back in high school.


We spent about three hours together talking about old times, new time, current times and life in general.  As we sat together, a host of my golf friends came over to our table to greet us.  I introduced them to Mike and we would all talk together for a few minutes.  I enjoyed it and I think Mike enjoyed it. One of my friends took a picture of Mike and I and as I was sitting in the Bud Cave this morning writing this blog entry, she sent me an email with the photo.  Here it is.  Feel free to print it and carry it in your wallet or frame it for your wall. 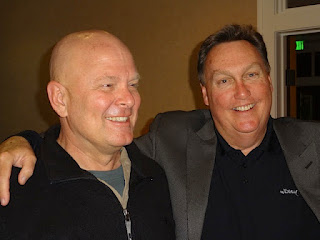 As the evening ended, Mike and I gave each other a goodbye embrace, expressed love and friendship for each other and finally said goodbye.  He flies back to Minneapolis this morning.  Who knows what the future may bring and I wondered if, and hoped that, we would meet again someday in the not too distance future.  I have written a number of essays in this blog about family and friends.  Their importance continues to grow for me as I get older.  I realize how much these relationships mean to me, how much they enrich my life.  I decided years ago that when I see a friend or a family member I am going to give them a hug and tell how glad I am to see them. Last night was night of friendly embraces, laughter and discussions with Mike, with men and women golf pals and granddaughter, Kendall Marie.  What a night, perfect.
Posted by Bud Headman at 7:51 AM