This blog entry has no theme, no consistent topic, its just different thoughts, ideas and basic stuff.

1.   A couple of weeks ago I was at the grocery store with the Lovely Sharon.  We were each depositing various items into our shopping cart.  Sharon put a package of sandwhich ham slices in the the cart.  I thought that the all beef bologna looked good for sandwhiches for the next week.  I put a package in the cart.  The Lovely Sharon, saw what I did, she walked to the cart, picked up the bologna, looked at it and took it back to the refridgerated shelf and put the bologna back with its brother bologna packages.  I was offended and asked her what the heck she was doing.  She responded with "processed meat is not good for you".   I said ok but I was thinking, I have eaten bologna my entire life., I am almost 60 years old and how harmful could a couple of bologna sandwhiches be?  I did not make a big deal out of it.  However, two days later when I arrived home from work, I discovered the Lovely Sharon had gone to the store again and to my surprise, she had purchased a package of hotdogs.  I picked the hot dogs up, looked at them, read the lable and asked Sharon if it did not occur to her that hot dogs were processed meat similar to bologna.  She responded  with "the hot dogs are  all beef".  I countered with,"the bologna was all beef". She said it was different.  Go figure.

3.  I like the art of US impressionist  Childe Hassam. Frederick Childe Hassam (October 17, 1859 – August 27, 1935) was a prolific American Impressionist painter, noted for his urban and coastal scenes. Along with Mary Cassatt and John Henry Twachtman, Hassam was instrumental in promulgating Impressionism to American collectors, dealers, and museums. He produced over 3,000 paintings, watercolors, etchings, and lithographs over the course of his career, and was a founding member of The Ten, an influential group of American artists of the early 20th century. 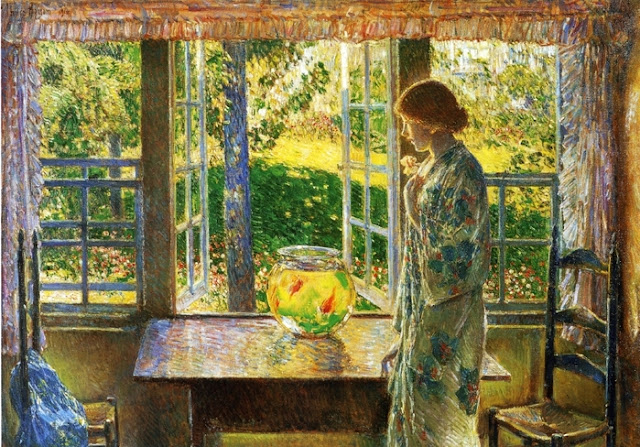 5. Last Saturday, the Love Sharon and I had a barbeque at our house. Our guests were two Mormon Bishops and their wives, a retired Jewish Rabi and his wife and a Catholic Monsignor.  Each person is a dear friend of mine.  We had to figure at what to serve.  No pork for the Rabi and no wine for the Mormon Bishops. It was a lovely and wonderful eveinng with a lively conversation. I am blessed to have such a diverse group of friends, all are truly wonderful people.

6.  I love America.  I love our history. Happy Independence Day.
Posted by Bud Headman at 7:58 PM