I have always been keenly interested in post-World War I Paris. The city was filled with American, Canadian and European artists, painters, sculptures, and composers who, for one reason or another, descended upon Paris, practiced their craft and interacted with each other.  Gertrude Stein coined the label “the Lost Generation” to refer to this group of authors and artists.  One of the primary attractions for the Lost Generation to Paris and other parts of France was the exchange rate between the dollar and the French Franc.  In short, the dollar could buy more in France than it could in the USA.  I think other attractions was the beauty of Paris and the fact that the Lost Generation was a large and lively group, that worked together, dined, together and drank together.  They helped each other and they were sometimes jealous of each other.  In the last year I have read 10 or 12 books about the Lost Generation and Paris of the 1920’s.  It is interesting to read different versions of the same event written by different people who were witnesses to, or part of, such event.

To read some of the names of the Lost Generation group (a loosely defined group at best) it amazes one that all of these then, or later, well-known artists and writers were in Paris at the same time, interacting with each other.  Names such as Hemmingway, F. Scott Fitzgerald, Ford Maddox Ford, John Dos Passos, Sherwood Anderson, and T. S. Elliot.   Picasso was there. So was Cole Porter.


The story of Gerald and Sara Murphy as socialites, artists and friends of the writers and authors of the Lost Generation is a truly interesting story. Sara’s father was wealthy and Gerald’s father was the owner of the Mark Cross Company.  The following blurb was from an interesting article written by Wendy Goodman and published in the July 12, 2006 New York Times Magazine:


Gerald and Sara married in 1915, eleven years after that party, and became the kind of couple that seems invented for fiction: worldly, artistic, bohemian, glamorous. Years later, their friend F. Scott Fitzgerald would use them as the model for Dick and Nicole Driver in Tender Is the Night. They spent the twenties living on the Riviera with their three children. They bought a house in Cap d’Antibes, remodeled it, and named it Villa America. Gerald painted and exhibited in Paris at the Salon des Independents in 1925, and had a posthumous retrospective at the Museum of Modern Art in 1974, and the couple entertained their luminary friends: Fitzgerald, Ernest Hemingway, Jean Cocteau, Cole Porter. But in 1933, when Europe began to roil and their son Patrick was diagnosed with tuberculosis, they came back to the U.S. and Gerald ran the leather-goods company Mark Cross, which his father had founded. 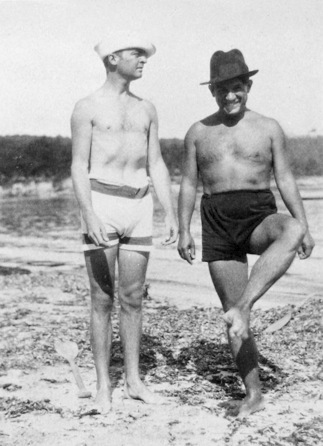 The Murphy’s story is a compelling story.  For a short essay about them go to:

If you are interested in this time period, Paris or the Lost Generations, some of the books I read are as follows: