Things I am Not Good At

I think I am a pretty good lawyer.  I am quick to analyze a problem and come up with a couple of courses of action for resolution.  I think I am pretty good at expressing complex ideas in writing. The other day it occurred to me that other than the practice of law, I am not really good at anything else.  It is almost depressing to think about all the things that I can't do, don't know how to do or that I am just plain bad at. Because of the vast number of these things I cannot prepare a complete list of Can't Do's but a number of them easily come to mind.

-  I absolutely do not know how to sew a button on a shirt. With the Lovely Sharon and I living apart in the winter, sewing a button on a shirt is a helpful skill.  A couple of years ago, one of my law partners sewed a button on my shirt cuff for me at the office.  Usually, I just take the shirt to the laundry and ask them to sew it on for me.

-  I have no clue how to repair or replace an in-ground sprinkler valve.   Our Salt Lake yard has a fair number of valves and undoubtedly each year there is a problem with one or more of them.  They won't go on, they won't shut of, they leak.  When there is a valve problem, I hire someone.The valve repairmen's hourly billing rate is greater than my billing rate as a lawyer.  I should have gone to sprinkler valve repair school.

-  I cannot properly clean a window.  I can use windex and paper towels and spend a significant amount of effort and time working on the window but at the end of the project, the window still has streaks.  Truthfully, sometimes when I am done cleaning a window, the window looks worse than when I started.

- I am not good at putting the round plastic smoke detector cover back on the smoke detector after replacing the batteries. We have a zillion smoke detectors in our house. There is always one of them that needs the batteries replaced.  Once the batteries are low they start chirping. Every couple of minutes the offending detector emits a chirp.  The initial problem is to figure out which detector on the three floors of the house is actually the one chirping.  You would think it would be easy to locate the detector that needs attention but its not. Once I narrow the chirping sound down to a couple of detectors, I have to look at them as the chirp is sounded to make certain this indeed is the one that needs to have its batteries replaced.  It is odd but I need to look at the detector at the same time that it is chirping in order to make certain this is the correct detector.  Just listening does not seem to work.

Then I have to get the kitchen stool and climb on it, remove the cover from the detector, take out the two - nine volt batteries, replace the old batteries with new batteries, and then push the new batteries and their attached wires back into their designated recessed slots. The last step is to replace the cover.

You would think the cover replacement step of the process would be an easy thing right?  Wrong. I look at the edges, grooves and slots of the cover and I look at the edges, grooves and slots of the part of the device afixed to the ceiling and try to figure out which slot goes into which slot and which groove goes into which groove and which edge matches up with which edge.  I make a decision, insert the cover into the ceiling component and twist it. I let go of the cover with my hands and it is hanging off of the ceiling in a cockeyed manner, appearing to be seconds away from a total disengagement and a drop to the floor.  I then unscrew it and try again.  Usually it takes me about 4 attempts until I get it right.

- I am not very good at, or in any way care about, dusting.  If the Lovely Sharon asks me to dust something, I do it.  I try my best to be effective at the dust job.  Inevitably, after I dust something she looks at it and then she dusts it again.  I for one think it would be a more efficient use of our joint time if we skip my part of the dusting.  I seem to just move the dust around, sometimes turning it into something that looks more like mud than dust.  She actually seems to be able to remove it.  (I am pretty good at vacuuming).

- I cannot put the components of a TV home theatre system together.  In the old days. you bought a TV, big or small, you got it home, you plugged the power line into a wall socket and you either screwed in a cable or an antenna line to the back of the set. You turned the TV on and voila, instant entertainment.  Today,  you have the TV, the cable box, maybe the high definition cable box, the blue ray player, the amplifyer/receiver, seven speakers providing surround sound, Ipod docking station and who knows what else.  You have 5 or 6 differnet instructions manuals, one for TV and one for each device. If you really read the manuals there seems to be conflicting instructions in the different manuals.  You have 6 different remotes, none of which seemed to be related to the others so then you have go buy a seventh remote, a universal remote which comes with its own instructions.  You have to install wires and cables from each device to one or more other devices in such a manner that they actually work.

A new step in the installation process came up last week. You have to calibrate the TV.  I for one never heard of calibrating a TV until last week. We just bought a larger HD TV for the master bedroom.and Sharon told me that maybe we should have it calibrated, that it only cost $200.  I had no clue what she was talking about.  We buy a big new expensive TV, it gets installed for an installation fee by professionals and now we have to consider having it calibrated?  To me this is like buying a new car and having to pay extra to have the gauges and dials on the dashboard properly work. I got all worked up about the concept of calibration and she told me to calm down.

I am convinced that a normal American male cannot, within an 8 hour period, or maybe ever, put together a TV home entertainment set up unless they are in the business of doing that.

I currently have so many remotes that I sometimes cannot make anything happen.  Each TV in our house seems to require different steps to accomplish the desired task.

In our Palm Desert home, almost everytime I want to watch TV, I have to ask Sharon to turn everything on.  I don't know what I do wrong on that system but I always end up on an analogue setup instead of a digital setup.  We have a digital system not an analog system so once I am on analog set up all I see on the screen is a green background screaming at me "you are on analog stupid and you will never see anything until you are back on digital".  This is when I call out for Sharon to come and get the TV going for me. She comes to me, gives me a "you are a complete moron" look and gets everything properly going.

Last night we wanted to watch a DVD in the Bud Cave. The Lovely Sharon, who is usually pretty good at remotes and such, had to ask me to get the DVD going.  I had to use three different remotes in order to do so.  We had to turn on the TV and the receiver with one remote. I had to use another remote to change the receiver from cable input to DVD input. I had to use still another remote to activate the DVD player.  Finally, after a good bit of time we watched Part One of Season One of Downton Abbey.

PS Another problem with this whole remote business is that I do not always leave the remotes in the same place so it becomes a scavenger hunt just to find the damn things.

One thing I am good at is appreciating the beauty of things around me such as the the view of the first hole of the South Course at Ironwood Country Club. 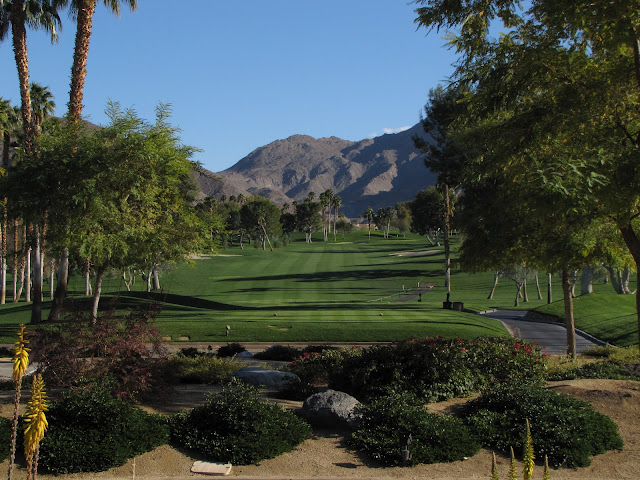 I hope you are better at things than I am.
Posted by Bud Headman at 6:32 AM