I always liked Audrey Hepburn.  For some unknown reason I was thinking of her a couple of days ago.  What a beautiful woman, with a sophistication and style all her own.  Here is a short bio about her from Wikipedia:

Audrey Hepburn is an actress British , born Edda (or Audrey ) ​​Kathleen Ruston on  May 4  1929 in Ixelles ( Belgium ), died  January 20,  1993 in Tolochenaz ( Switzerland.  She was nominated four times for Oscars.   In 1999 , the American Film Institute and has distinguished itself as the third greatest actress of all time in the ranking behind Katharine Hepburn , with whom she has no relationship, and Bette Davis .  She had a strong commitment to humanitarian causes. She was Ambassador of UNICEF between 1988 and 1992 and its work is now continued by the Audrey Hepburn Children's Fund , a charity founded in 1994 , a year after her death from cancer of the appendix.

My favorite Audrey Hepburn movies, in no particular order are:

Charade, Two for the Road, Breakfast at Tiffanys, Roman Holiday, Wait Until Dark, Sabrina and Love in the Afternoon.

I have watched each of those movies a number of times. 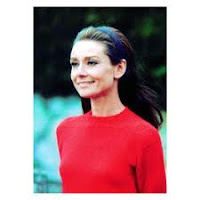 I know you have seen the movie Moon River a bunch of times but check at this You Tube clip of Ms. Hepburn singing Moon River.  Its delightful.

http://www.youtube.com/watch?v=TdTJ0bc6Hhw
Posted by Bud Headman at 11:53 AM