There is something about garages that has always intrigue me. Something that has drawn me to them.  When I was a boy, my dad converted our garage into a carpenter's shop for his business.  When I say he converted it, I mean he essentially rebuilt it to include a huge workshop area, several large storage rooms, ovehead storage, space for lumber and an office.  He raised the roof substantially so it was some 14 or 16 feet high.  This is where he and his crew built cabinents and furniture.  Where he laid out plans for his jobs, whether it was building custom homes or doing commercial jobs. The garage/shop was filled with tools.  There were a couple of table saws, two band saws, a lathe, a drill press, a rack with a dozen or more hand saws.  There was an arc welder and an acetylene welding and cutting tank and torch set.  There were boxes of nails.  There was a large multi drawer metal cabinent that had a zillion screws, bolts, nuts, washers and similar fastening items.  He could always find what he wanted in that cabinent even though there were probably more than a couple of thousand different pieces in it. There were dozens of power hand tools such as drills, skill saws and what have you. There was a large power planer that shaved down lengths of hardwood. There were rolls of architectural plans and designer sketches of furniture every where.

Most evenings, after a full day of work, and after dinner in the house, he would return to the garage shop and build something or plan the next day's work.  The garage was no longer a garage, it was his sanctuary, his place of business, his domaine.

In contrast to my father's shop/garage, my grandfather's garage was a cluttered, short, one bay garage detached from his house.  The house and garage were built in the early 1920's or even before. My grandparents, my father's parent's, lived next to us when I grew up.  In fact, the neighborhood was original Headman property and there were cousins, aunts, great uncles and great aunts throughout the neighborhood. My grandfather's garage had old tools scattered on a bench, old license plates nailed all around for years from the 1920's on up.  I used to love to look at the various colors and themes of Utah license plates as they changed from year to year.  In the old days and through at least when I was a teenager, you received a new set of license plates each year rather than just the annual decal that we get now.  I guess the State wanted to keep the prisoners busy.

My grandfather admired the femine form and he had a number of girly pictures tacked up in the garage.  Most of these picrtures were from calendars that one merchant or another distributed to customers.  These pinup girlie pictures were either paintings (prints of paintings) or photos of women.  Some of the models were fully clothed. Some were partially clothed with only a bare bottom or bare breasts exposed.  Others were full undressed.  Yep totally naked women. A true wonder for a boy like me in those days.  These pictures were different than today's fully exposed internet type of naked women pictures. These pictures were naughty but at the same time innocent  These were women sitting on swings or bicyles totally naked. Or women carrying baskets of flowers wearing sun bonnets but nothing else.  I never stopped to wonder why a beautiful young woman might choose to ride a bicycle while she was totally naked. I was just happy she made the decision to do so.

Yes my grandfather's garage was where I first saw a naked or partially naked woman.  It didn't matter that my first exposure to the female form was a photo or a print, it opened my eyes as to what was under those dresses and blouses that I saw every day.  It made me look at my beautiful third grade teacher in a whole different light.  To this day I still enjoy seeing a nice bottom and other parts of a woman.  It no doubt all started in granddad's garage.

The reason I have been thinking, and now writing, about garages is that I found a book at the libray entiled Garage, Reinventing the Place We Park by Kira Obolensky. This beautiful, coffee table type of book is filled with photos of wonderful garages, rooms over garages and other garage spaces. You want to explore each of the garages and rooms over garages displayed in this book.  Many, if not most of them, are not even used to park cars. 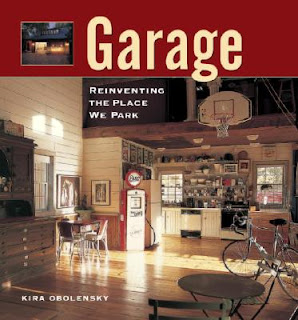 The book was published in 2001 but it is still available for purhase online, new and used . Check out Amazon for copies.
One reviewer of the book wrote:
"Anyone who thinks the garage is simply a place to park the car will never think that again after a look at this book. Garage takes a look at the last, undiscovered frontier of home design... the most versatile room not in the house. The book explores many uses for this ubiquitous space -- from studio, library, and museum to soundstage, playroom, and greenhouse. Garage takes this space seriously, after all.

-- Includes more than 200 color photographs of over 50 garages.
-- Shows how to create a garage "room" that meets one's needs for efficiency and style.
-- Provides options for using existing space and floor plans for new structures"
Its 6:30 Sunday morning and I am going to pour me another cup of coffee and venture out to the garage, open the door to the dawn and just mosey around.