I just read the following article at


"For whatever reason, Rush Limbaugh decided to discuss a study about male genitalia on his Friday radio show.According to Rush, the study, completed by researchers in Italy, found that the size of male genitalia has decreased over the past fifty years.


"The study's leaders claim to have bona fide research that says the average size of a penis is roughly 10 percent smaller than it was 50 years ago. And the researchers say air pollution is why," Limbaugh said.


Limbaugh said that he did not believe that air pollution and global warming could have such an impact. "I don't buy this. I think it's feminism. I think if it's tied to the last 50 years, the average size of a member is 10 percent smaller ... it has to be the feminazis," Limbaugh said."


I could make a number of comments about Rush's theory on penis size and about Rush generally, but I won't. Rush, god bless him, is a right wing comedian and former drug abuser.  Rush is a showman.  He is a Jerry Springer but rather than trying to start fights between guests over their relationships, comedian Rush tries to start controversy over political issues.  Its his bit. Rush is no swami or political scholar he is a political comedian like John Stewart. 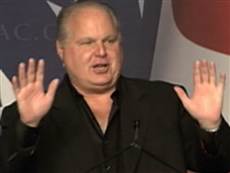