If you like small books, if you like books about Paris, if you like a true life account about an American moving to Paris and the excitement and difficulties that presents,  you might like reading the non-fiction C'est la Vie by Suzy Gershman.  I am going to be bold and refer to her in this post as "Suzy". Ms Gershman, execuse me, Suzy was the fairly well known author of 16 Born to Shop books. 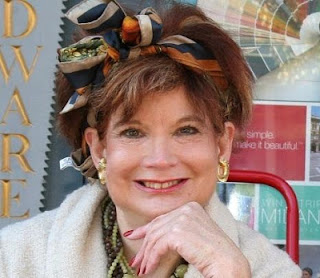 The following description was from the New York Times:
http://www.nytimes.com/2012/07/30/business/suzy-gershman-dies-at-64-wrote-born-to-shop-guides.html?_r=0

“My heart goes pitter-patter every time I walk into this closet-size store; I’ve never seen so many handbags that I couldn’t live without,” Suzy Gershman wrote of one of the hidden gems she discovered in her research for “Born to Shop Hong Kong.” “These bags are not copies, they just coincidentally look a lot like the handbags in fashion magazines.”

Of another find, revealed in “Born to Shop New York,” she wrote, “This is the kind of small Madison Avenue boutique that you might pass without ever knowing that it is the ‘in’ place for Upper East Side ladies who like the Euro-Asian-artsy-hippie-boho look.”
Ms. Gershman was the author of 16 “Born to Shop” guides, published over 26 years and compiled during hundreds of thousands of miles of worldwide wandering and, very often, back-street meandering. Six became standards that have been revised every other year — for New York, London, Paris, Hong Kong, France and Italy. In all, more than four million copies of “Born to Shop” books, first published by Bantam and then Frommer’s, have been sold.
I have written in this blog anumber of times about my love of books, libraries and bookstores.  A few days ago, my visit to our local library resulted in four books that I brought home.  Two fiction and two non-fiction.  None of the books were new or recent, they were hidden gems from the stacks. One of which was C'est la Vie.
This year, the Lovely Sharon and I spent the last part of September and first part of October in France.  As I was hunting through the stacks and the library at our local library I came across C'est la Vie, a 2004 account of Suzy's move to Paris.  She had long wanted to live for some period in Paris.  In 2003, her husband MIke died in her arms after a fast hitting illness.  He knew of her desire to live in Paris and shortly before his death he made her promise to make the move, and she did.  She was about 52 years old.  The following review is from Kirkus Book Reviews:
Journalist Gershman packs her bags and heads for France, chasing a dream as she runs at an angle.
Lung cancer was the precipitating event, stealing the author’s husband from her and prompting her to move to France. Gershman had long planned to retire there, having been to the country numerous times as an author of Frommer’s Born to Shop guides; here, in a hard-won if expectant and humorous voice, she relates exactly how she went about making the shift. Those tempted to turn up their noses at the suggestions of someone who writes “born to shop” books should hold their sniffs: as much as anything, this is a tactical guidebook for laying siege to Paris, full of good advice on how to set up a new life there, at least in the material sense. (Which is no small potatoes.) Gershman has only a small bankroll, so she is attuned to making the money stretch. “Okay, okay,” she writes. “So I paid for the funeral with a credit card, it’s true. I wanted the miles. I was moving to France.” Take her dark humor for what it is, a parry against the pain as the author details her search for an apartment, triangulating its location with the pleasure principle. (“It was so hot that I was forced to retreat to my favorite shoe discounter [Moda, 79 rue des Victories].”) When the time was properly ripe, Gershman made herself available. “Dating sucks,” she discovered, yet if she “wanted a reason to shave my legs again,” Paris was a city in which a middle-aged woman could feel very much alive. The hours with “the Count” blew upon enjoyable embers, but didn’t eclipse her foursquare search for a home she could call her own.

The following review was on Amazon's web site:

Who, at one time or another, hasn’t dreamed of leaving her life behind and moving to Paris? Bestselling writer Suzy Gershman (dubbed "Super Shopper Suzy" by Oprah and "the most famous shopper in the world" by American Express Card Services) had always planned to retire to the City of Light with her husband. But when he died, Suzy decided to fulfill their dream alone—making a new life for herself in her favorite city.  C’est la Vie is the deliciously chatty chronicle of her first year in Paris, of the dizzying delights and maddening frustrations inherent in learning to be a Parisian. After a grueling apartment search, the woman who was Born to Shop sets out on the terrific adventure that is French daily life—from the great flea markets and restaurants to the mysteries of a French fax machine, the chimney sweep, and a French love affair. Heartfelt, breezy, funny, and garnished with little-known shopping tips, C’est la Vie is a treat not just for armchair travelers, Francophiles, and fans of Peter Mayle, but also for anyone who has ever dreamed of starting life anew.
Show More
Show Less
The book was fun, especially to someone who had just visited Paris.  After reading C'est la Vie I googled Suzy and was sadden to learn that she died in July 2012.  If you want a fast, enjoyable read order C'est la Vie from Amazon or look for it at your local library.
Posted by Bud Headman at 6:52 PM