Paris, the City of Lovers

As I start writing this blog entry, it is 12:04 am Sunday Morning, September 22nd.  I might add that is Paris time, yes friends, Paris, France time.  I am sitting in my boxers and a tee shirt in the small living room in the small flat on Avenue de Breteuil that the Lovely Sharon rented for us for the next five nights.   The Lovely Sharon is fast asleep in some very cute jammies in the adjoining bedroom, where I also was until a few minutes ago.  I am wide awake thanks to someone yelling in the park that runs down the middle of Avenue de Breteuil, separating the north bound lane from the south bound lane.  His yelling combined with my problem with time zone adjustment has drawn me to the living room sofa where I am writing what you are now seeing. Oh the beauty of modern travel.

We arrived in Paris Saturday morning around 7:15, almost an hour early.  As far as flight as flights go, it was a good flight.  The business class seats and foods were very good, so much better than coach.  “I would like to thank the god of airline points who was has provided for us this day.”  It was a difficult decision as to which wine to have poured each of the zillion times the flight attendant dedicated to wine came my way.  At one point I had had enough wine but who was I to disappoint her when she kept coming by to offer more.

Speaking of wine and flight attendants, the first leg of our flight from Salt Lake to Paris took us to Cincinnati. During that, flight the Lovely Sharon and I became friendly with a flight attendant in first class.  (Thank you again “Oh Exalted God of Travel Points”).  Prior to landing at the Cincinnati airport, which for some odd reason is in Kentucky rather than in Cincinnati or anywhere else in Ohio (go figure), our friendly flight attendant brought us a large Delta Airlines shopping bag with a full size bottle of white wine, all kinds of cookies, bags of nuts, chips, candy, salsa and other goodies.  We were, as you can imagine, surprised but pleased to have been given such a treasure trove of airline goodies. I think we won Miss Congeniality for the flight.

We were met at Charles De Gaul airport by a Sri Lankan driver smartly dressed in a dark blue suit. When we cleared customs and claimed our bags we found him waiting for us holding a sign on which the words “Sharon Headman” were written in orange.  He obviously did not know us or the sign would have said “The Lovely Sharon”.  He helped us with our luggage to his vehicle and soon we were on the motorway to the City of Lights.

We arrived at 55 Avenue de Breteuil around 8:30 am.  This is not a hotel but an 8 story apartment building located in a neighborhood of other apartment buildings in the 7th Arrondissement, just down the Avenue from the Palace Invalides.  As everything had gone so smoothly, we were some 45 minutes too early for the lady who was to show us to our flat and give us our keys.  We were able to get into the building through the efforts of our driver  and the building manager and we took our luggage, piece by piece, up the tiny two person elevator to the sixth floor.  The sixth floor is actually the seventh floor since floor 1 is the second floor not the first floor (again go figure). Finally the lady with the key arrived and we were admitted to our home for the next five days.

Upon entering the flat we found ourselves in a small room with a day bed, bookcases full of art books, a writing desk and to our surprise, a piano.  The main living area is up still another flight of stairs where found a living room, a kitchen galley, a bedroom and bathroom with a small washer-dryer unit.  This was not the Ritz Hotel (or since we are in France should I say “otel”).  This was obviously an artist’s garret with a large library of art books on both levels of the flat. This would be living like the French rather than like a tourist, which was our plan. 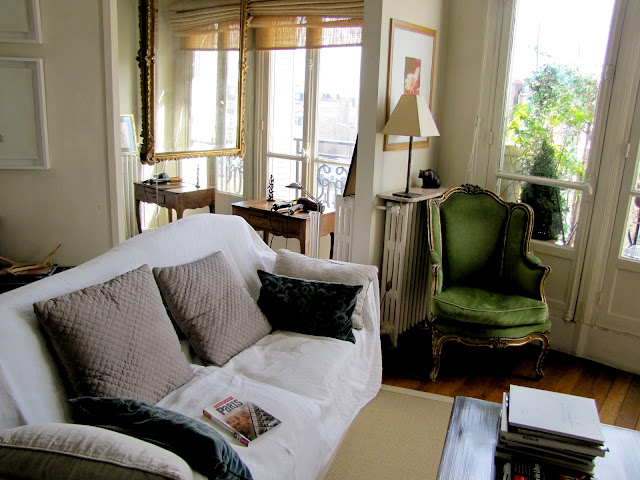 The view from our flat was the view of Paris that I had always seen in my imagination. 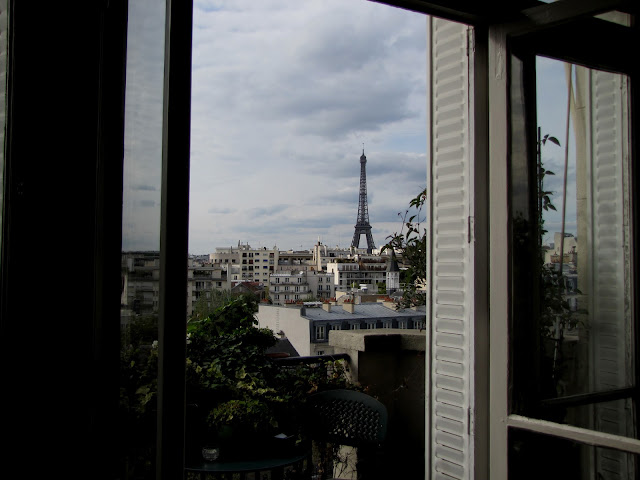 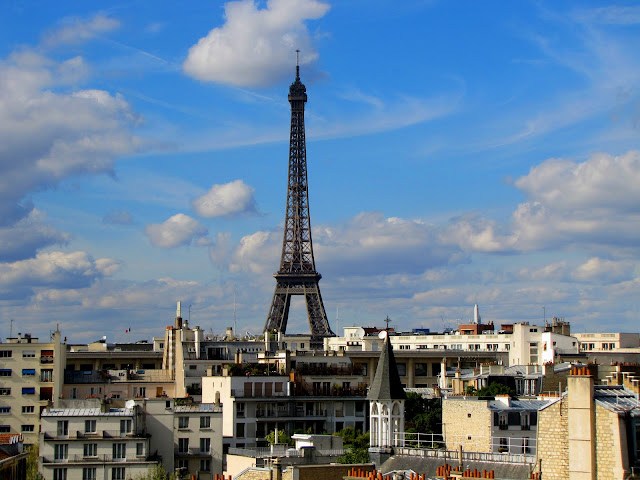 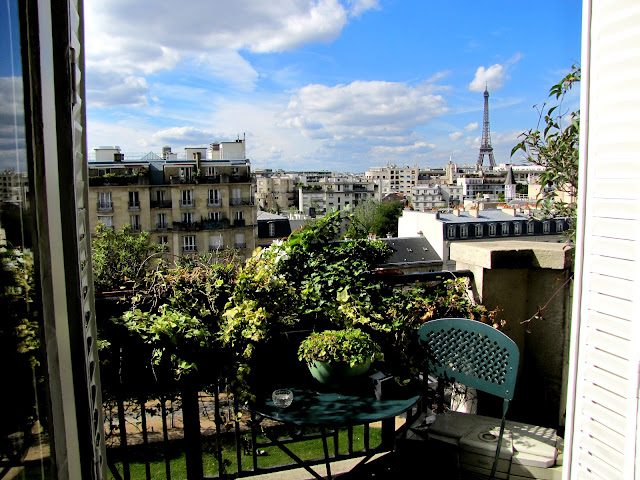 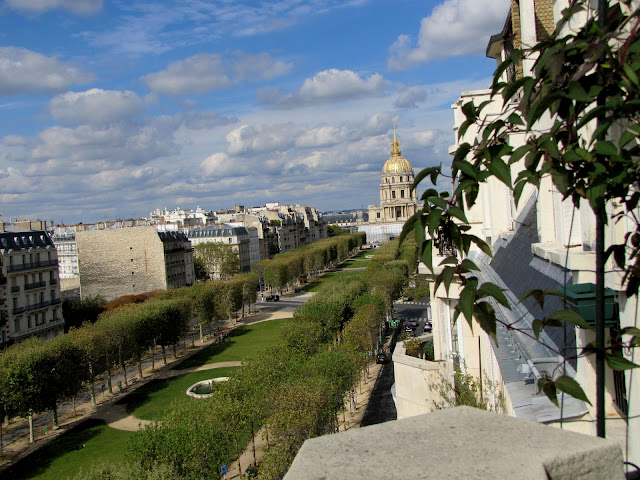 After the key lady left, we both showered, not together mind you, but one after the other.  I was tired.  The Lovely Sharon was not quite as tired as I was as she had slept on the plane, I had not. But we showered and changed and headed at for an afternoon in Paris.  We decided to meander to the Eiffel Tower. So we did, we walked primarily through residential neighborhoods until we came to the Parc Du Champ de Mars which as you Francophiles know is the park around the Eiffel Tower.  We had walked in silenc, in part because we were both tired, but in part because were both taking in the sights of Paris.  A city we have wanted to visit together before we were married 8 and ½ years ago.

We initially had planned to get engaged in Paris almost 10 years ago but global events, “Gulf War I”, changed our plans as the French were opponents to our venture into that war and were mad at us and because they were mad at us we were mad at them.  Remember “freedom” fires instead of French fires?  Remember U.S. consumption of French wines declined? So we ended up getting engaged 9 ½ years ago in Palm Desert and married one year later in Palm Desert.  From the day we were married to the day we left for France (September 21, 2012) was exactly 8 ½ years.  So here we were, tired, quiet and somewhat overwhelmed to have finally made it to Paris.  We strolled in silence to the Eiffel Tower.  Sometimes holding hands, sometimes hands a part, but at all times contemplating life, love, marriage and Paris.

The Eiffel Tower continued to loom larger and larger as we strolled nearer to it.  Finally we were standing under it looking up at the tower from the center of its massive four corner base.  We discussed whether we should go up the tower at that time, but the lines were long on this Saturday and we were both too tired to wait so we decided to leave the ascent up the tower to later in the week and turned around and headed back to our flat.  On the way back we realized we were hungry again and we finally had a late afternoon lunch at the Grand Bistro on Avenue de Breteuil.  We both were looking for something simple, like a sandwich, but this elegant lunch, a full three course meal with a bottle of red wine, seemed perfect for our first day in Paris.  After lunch we were tired and satiated and plodded back to our flat for a nap.


After three hours I woke up.  The Lovely Sharon was still sleeping so I left on my own for another walk of an hour or so.  When I arrived back to the flat around 7:00 p.m. she was sitting on the couch still in her jammies working on her Ipad.  We remained in the living room until 8:30 or and then off we went to bed.  As I stated at the beginning of this blog I woke up again shortly before midnight and I decided to write about our first day but save the posting until we get back to Salt Lake City.
As I sit on the sofa and write, I can see through our balcony doors, the Eiffel Tower, lit up like the beacon to the world that it is.  The lights change colors, they sparkle then they don’t sparkle.  It is truly beautiful and I am amazed I am here. Here, in Paris, with the Lovely Sharon asleep in the next room.  My toes are cold.  I have said what I have to say.  I am going back to bed and put my cold feet on her warm feet.  I hope I don’t wake her up. 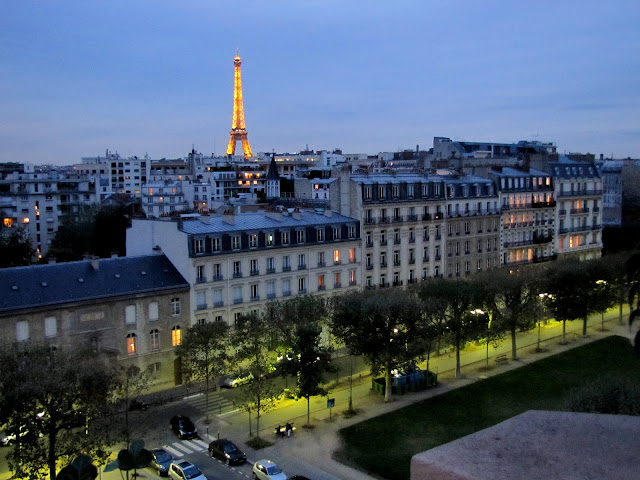