I just finished reading a non- fiction book entitled Sacrament of Fear by Will Dresser.  The lead character of the book is Wes Franklin.  This is a suspense novel set in The Netherlands and other locales.  I like the Wes Franklin character.  Apparently, there are two additional Wes Franklin books.  I like books with continuing characters.  You get an understanding about the character in multiple books and feel like you know them and their history. 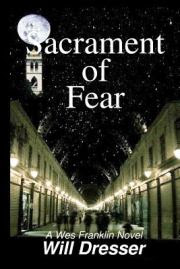 Kirkus Reviews reviewed the book at:


The Cloister of Akhenaten, a network of people who exchange sensitive information, loses several affiliates to seemingly natural events: heart attack, stroke or simple disappearance; one member is understandable, six members is suspect. American Dr. Wes Franklin heads to Amsterdam for a friend’s funeral, but also to check into the mysterious deaths. His girlfriend, Ashley, investigates in Edinburgh, while Rouzbeh Aryana, Wes’ Persian muscle, searches for a missing man in Damascus. An attempt on Wes’ life confirms his belief that someone wants them dead, but the group learns that it’s merely the second wave in a terrorist faction’s plan for revenge. The first volume of this planned series is a story of espionage, but one that favors the covert aspects over the more obvious ones. There are enough combat scenes to appease action fans, but the investigatory sequences are most effective. The story bolsters anticipation by relaying information early: the knowledge of a suspicious but as-yet-unseen man with a big golden ring; the mention of a captured terrorist’s brother, his menace aptly noted before he makes his first appearance; and a key element of the terrorist’s design signified by three cryptic letters. The book’s pace is steadily maintained, largely due to the three distinct settings the members of Wes’ team find themselves in. Aryana’s story is the most intriguing; he spends much of his time with a holy man, Mua, in the same region where the terrorists dwell. The nefarious scheme is frighteningly simple; it does not involve a detonation of any kind, but rather an unassuming tactic to fuel fear. One of the story’s most refreshing merits is its refusal to present a black and white depiction of good and evil; one character who’s given his own perspective is a young Muslim who’s been manipulated into helping carry out the terrorists’ plan.


A global thriller that chills with suspense in lieu of bullets.


I am not certain but it appears that this book is self-published by the author.  At least there was no information about a publishing company in the copy I read. Will Dresser’s web site is