One of my favorite Utah artists is Valoy Eaton.  I have one of his oil paintings in the Bud Cave.  The following bio is from his web site:


Valoy Eaton paints quiet subjects with a universal message - a message of truth, life and light. He believes that some of the most profound subjects are found in everyday occurrences when living close to nature.


In the 1960's, Valoy was teaching art and coaching basketball, golf and tennis at a high school in Salt Lake Valley. Even though he was enjoying his lifestyle, he considered himself to be sort of "stuck in the mud." Something was missing-the chance to achieve something special with his artwork. With the encouragement of his wife, Ellie, he went to work painting during nights and weekends and eventually entered a painting in the Utah State Fair-professional division. When he won Best of Show he said, "I sang all the way home and resolved to make some more good things happen." After that, his career started to accelerate and his work became more and more in demand from galleries and collectors. In 1971 after receiving his Masters Degree in painting and Design from BYU, he quit teaching school and began painting full time. Since then, he has sold over 1700 of his sunlight-filled oils and watercolors.

His career has led him to be invited to participate in prominent gallery and museum shows across the U.S., including a one-man retrospective show of 73 paintings at the Springville Art Museum in 1982. He was voted a lifetime member of the National Academy of Western Art, and later served as chairman of the prestigious group. At their annual exhibition in Oklahoma City he won several gold and silver medals for his landscapes. In 1988 he was appointed by the Governor to serve on the Utah Arts Council, representing the visual arts for the state. In 1995 he was honored for his contribution to the arts by the Salt Lake Chamber of Commerce, by having a portrait of him hung in Abravanel Hall, home of the Utah Symphony Orchestra. The Utah Governor’s Mansion Artist Award was presented to him in 2002.


Valoy is an artist who looks at life and responds with paint and brushes. His work is motivated by a reverence for nature and the human condition. He has a strong appreciation for light and space, shapes and colors. "Now," Valoy says, "maybe I can build upon the great experiences I have had during the past 36 years and climb the ladder a step or two and make some more special things happen. If an artist stops improving, he's through." 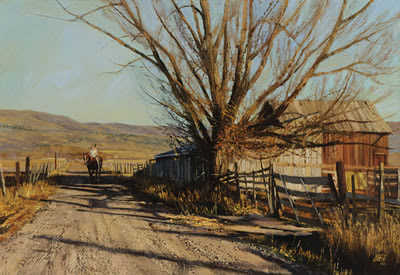 Check out his website for views of his art.