I just finished a terrific book, a novel entitled Rules of Civility by Amor Towles.  This is Mr.Towles first novel.  The plot centers around Kate Kontent and most of it takes place in Manhatten in 1938 to 1940.  Kate's life interacts with several men and women who are friends and not friends.  The book reminds me of an updated version of the Great Gatsby.  Although its a novel, its depiction of 1938 New York and other locales,  seems almost lijke non-fiction.  The book was published in 2011.  I would recommend it if you like that time period.

The following review was in the New York Times Book Review:

The saying “May you live in interesting times” has undeniable resonance for the investment executive-turned-­novelist Amor Towles. In 1989, he was set to go to China for two years to teach. When the Tiananmen Square massacre put an abrupt end to that plan, he headed for Manhattan. On his first night in the city, he met two strangers. One would become his brother-in-law; through the other, he found the job in which he has worked for 20 years. What would have happened if he’d hit town a day later? This is the kind of improbable-but-true serendipity that plots the lives of people in their 20s — in whatever epoch — before they know the weight that decisions

In Towles’s first novel, “Rules of Civility,” his clever heroine, who grew up in Brooklyn as “Katya,” restyles herself in 1930s Manhattan as the more clubbable “Katey,” aspiring to all-American inclusion. As World War II gears up, raising the economy from bust to boom, Katey’s wit and charm lift her from a secretarial pool at a law firm to a high-profile assistant’s perch at a flashy new Condé Nast magazine. One night at the novel’s outset touches off the chain reaction that will produce both Katey’s career and her husband, and define her entire adult life. She’s swept into the satin-and-cashmere embrace of the smart set — blithe young people with names like Dicky and Bitsy and Bucky and Wallace — with their Oyster Bay mansions, their Adirondack camps, their cocktails at the St. Regis and all the fog of Fishers Island.

The city does not necessarily allow Katey to forget herself. When she pops into a newsstand at Astor Place to buy The Times, a boy from the old neighborhood recognizes her as he tries to cadge a smoke. “Hey. I know you, right?” he asks. “I don’t think so,” she replies, noticing that he has “the same presumptuous smile and the wandering eye” that he’d had when they were 14. “That’s the problem with being born in New York,” the paper seller remarks, after the scrounger saunters off. “You’ve got no New York to run away to.”

Except, as Towles so persuasively shows, New Yorkers do have another New York to run away to: the New York of their past. For Katey, who in 1966 is moved to recall hers, this bygone metropolis is the New York of 1938, the most consequential year of her youth. Her memories reanimate that era, awakening in the reader the tingling recognition that her history and the city’s remain familiar, latent, even recurrent, with would-be Kateys lurking in office cubicles to this day.

With this snappy period piece, Towles resurrects the cinematic black-and-white Manhattan of the golden age of screwball comedy, gal-pal camaraderie and romantic mischief (think of "Stage Door," "Made for Each Other," "My Man Godfrey" and even Fay Wray in "King Kong"). With Katey, we travel by cab and watch Broadway “slipping by the windows like a string of lights being pulled off a Christmas tree,” or see limousines idling in front of the 21 Club, smoke spiraling from their tailpipes “like genies from a bottle.” These pages prompt recollections of movie scenes stamped so deeply on the psyche that they feel remembered: elevated trains, Carole Lombard and Jimmy Stewart, smoky jazz clubs and men in fedoras. To call such images clichéd would be to call youth clichéd, to call Manhattan itself a cliché. As in the 1937 Lombard film "Nothing Sacred" — which opens with a mighty montage of towering buildings super­imposed with the words “This is New York, Skyscraper Champion of the World . . . where the Slickers and Know-It-Alls peddle gold bricks to each other . . . and where Truth, crushed to earth, rises again more phony than a glass eye” — an ironic attitude can do little to diminish the power of the city’s mythology. And if, as you watch or read such archetypal stories, the thought does arise that nothing (and nobody) is quite as it seems, what remains, as Gershwin wrote, “ ’s marvelous.”

Katey rooms in a women’s boardinghouse with a strong-willed girl from the Midwest named Eve, who’s determined to live in New York without her daddy’s financial support. On New Year’s Eve in 1937, Katey and Eve head for a Village jazz club with three dollars between them, intending to scrape by on one martini an hour and to peel off to a Ukrainian diner as 1938 dawns, for a 15-cent breakfast of coffee, eggs and toast. Enter a handsome man, “an upright 5-foot-10, dressed in black tie,” with brown hair, “royal blue eyes” and a cashmere coat so elegant Eve can’t take her eyes off it. She instinctively introduces herself as “Evelyn” to sound a little grander. The man’s name is Tinker (“How the WASPs loved to nickname their children after the workaday trades,” Katey notes, admiring him all the same). He stands them to drinks, gallantly venturing into the cold night to find Champagne and returning with a bottle hoisted aloft by its neck, “grinning like a truant holding a fish by the tail.”

Not long after midnight, Tinker disappears, leaving behind a solid gold engraved lighter, like a male Cinderella with a Zippo instead of a slipper. Will one of the roommates add his initials to her monogram? Tracking him down shouldn’t be hard; he’s let slip that he lives in the Beresford, a luxury building on Central Park West. But once they find him, will he turn out to be a prince? If he is, why does he have a heavily underlined copy of George Washington’s notes on proper social behavior (the “Rules of Civility” of the title)? Wouldn’t such niceties come naturally to a prince? Towles’s central characters are youthful Americans in tricky times, trying to create authentic lives, even if quasi-pseudonymously. “In New York City,” he writes, “these sorts of alterations come free of charge.”

The novel follows Katey through 1938 as her friends and circumstances shift, and as social masks rise, fall and rise again. In Manhattan, she recognizes, a long memory is not always convenient. And from the beginning, the reader knows that after this eventful year, Katey will not see Tinker for nearly three decades — until she happens upon his image at the Museum of Modern Art while strolling with her husband through an exhibition of Walker Evans photographs of subway riders, taken between 1938 and 1941. She spots Tinker in one of them, “ill shaven, in a threadbare coat.”

When she points out the photograph to her husband, identifying Tinker as an acquaintance, he furrows his brow and says, “Riches to rags.” But Katey remarks, “Not exactly.” Yes, she thinks, “Tinker looked poor in that picture. . . . But he looked young and vibrant too; and strangely alive.”
Evans had snapped Tinker the year he quit trying to scale Manhattan’s invisible mountain and took work on the docks. Standing on Pier 80, smoking, leaning against a piling and admiring “the whole staggered assembly of town houses and warehouses and skyscrapers stretching from Washington Heights to the Battery,” Tinker had thought that “from this vantage point Manhattan was simply so improbable, so wonderful, so obviously full of promise — that you wanted to approach it for the rest of your life without ever quite arriving.” As Towles shows, that can be arranged. In a way, that can hardly be avoided. 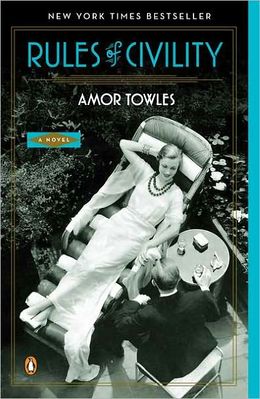