The Book Stalls of Paris

As the Lovely Sharon and I strolled through Paris for several days in October we happened upon stall after stall of books for sale on the Left Bank.  There seemed to be thousands of books, photos, maps and prints for sale by men and women who looked like what you think a Parisian should look like.  The Lovely Sharon and I had just eaten lunch on the Île Saint-Louis and we walked across the bridge to the Left Bank, headed west and came upon the book stalls.  With Notre Dame in the background, the Seine behind the book stalls, and the bustle of pedestrians and cars, it was like being in a movie about Paris.  It was exactly what I had imagined Paris to be like and to sound like.
A painting of the Books Stalls: 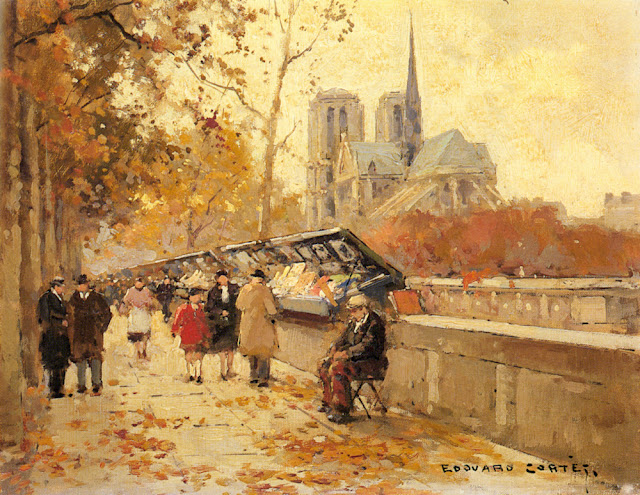 As a lover of books, I have been curious about the book stalls and have Googled the books stalls and found  many informative articles about them.  Here is one:

PARIS: Paris’ antique booksellers, or bouquinistes, have been present first on the Pont Neuf and later lining the Left and Right banks of the Seine since the 17th century. The articles they sell vary from ancient editions of books to second-hand contemporary novels, engravings and prints, magazines, collector’s stamps and antique postcards. But last month, the Paris city council stepped in to rap their knuckles: the bouquinistes have been surreptitiously selling cheap souvenirs alongside their second hand books as a way to make ends meet in a changing market.


The bouquinistes, who are given their lots by the city hall for free and are exempted from paying taxes, do have to follow certain rules, including one that states they must sell books in three out of the four boxes they are allowed to place in their area. They have a duty, says the city hall, to preserve a long-standing cultural heritage. The problem is that many bouquinistes say their plastic Eiffel Towers and other tourist trinkets sell better than used books. Part of the problem, say the bouquinistes, is that they are located in tourist areas and most of the tourists don’t read in French.


These freewheeling booksellers have been defending their right to exist for over 300 years. Even in 1620, 20-odd booksellers were waging war with the established bookshops around the Pont Neuf and were only allowed to do business on Sundays and on holidays when the bookshops were closed. They were often chased from the bridge area and were tolerated only if they removed their books at night.


It was during the French revolution that bouquinistes came into their own. Printing came to a virtual halt and only political and revolutionary newspapers and tracts were being published. The bouquinistes sold these as well as used books, including rare editions that had been obtained from pillages. The word “bouquiniste” was added to the venerable Academie Francaise’s dictionary in 1789.


Under Napoleon I, the bouquinistes spread from the Quai Voltaire to the Pont Saint-Michel on condition they were not to sell anything that was “immoral.”


Under Napoleon III, they were allowed to install boxes filled with books on the parapets of the quays on the Left Bank. The city hall handed out permits each year to the bouquinistes for their stalls.


During the booming literary 19th century, second-hand copies of novels by George Sand, Gerard de Nerval and Flaubert were snapped up, and by 1900 there were 200 bouquinistes.


Today there are 216 bouquinistes installed along the Seine selling 400,000 books. The city of Paris has so far given 40 of them warnings with a year to get rid of their stock of tourist baubles. The mayor’s office is also looking for solutions to help bouquinistes stay solvent, perhaps allowing them to sell items related to books or writing as well as setting up a collective website and taking care of removing graffiti from their traditional green boxes. In the meantime the Paris city hall has received 100 more applications from bouquinistes-to-be for only 22 free spaces — a sign that the profession is still attractive to book lovers.


Here are some photos I took as we walked by the books stalls:
The Lovely Sharon checking out prints 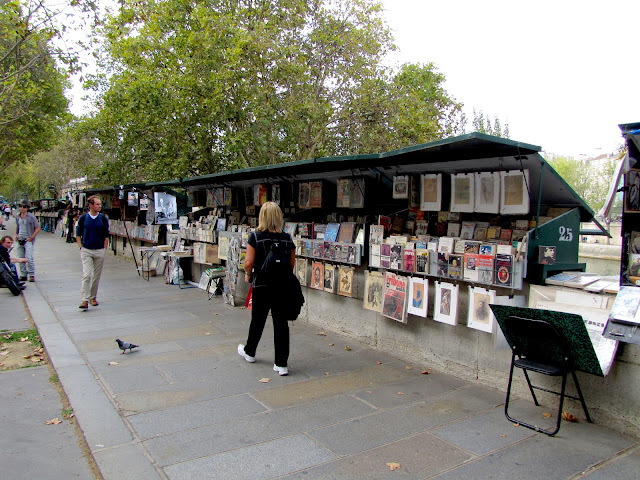 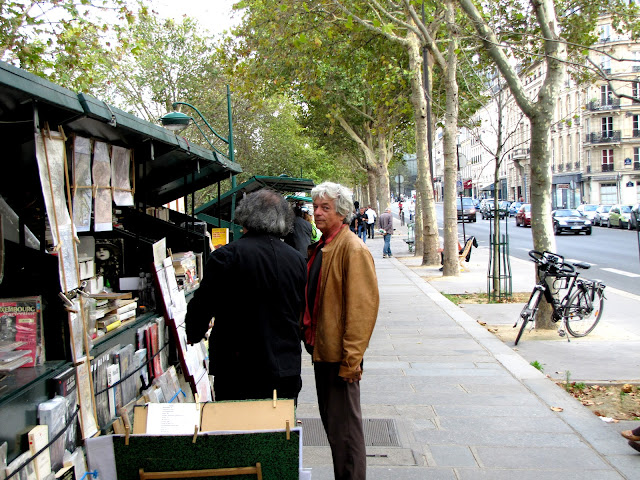 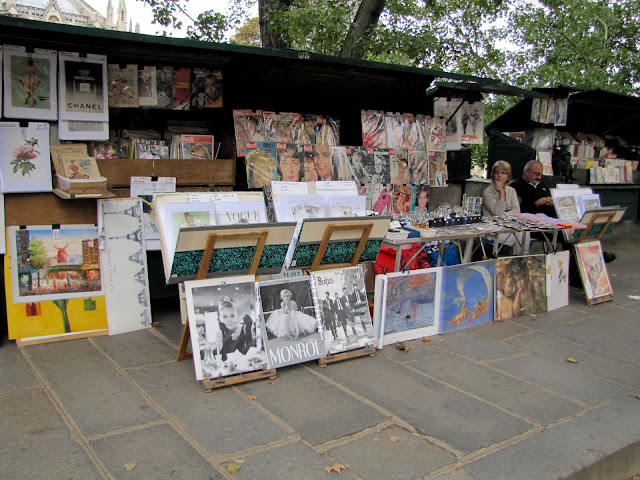 Behind the Books Stalls 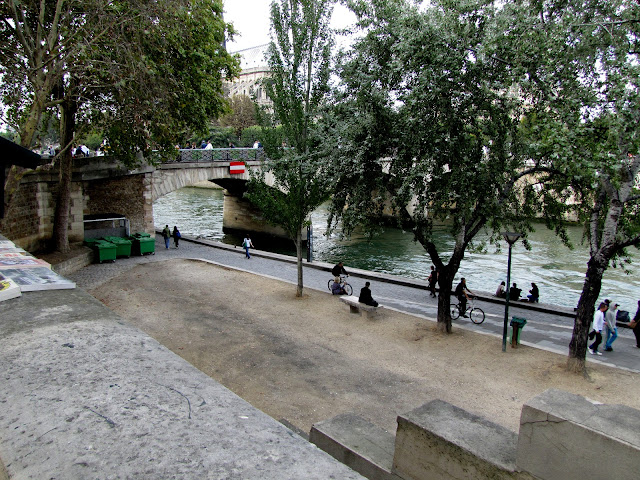 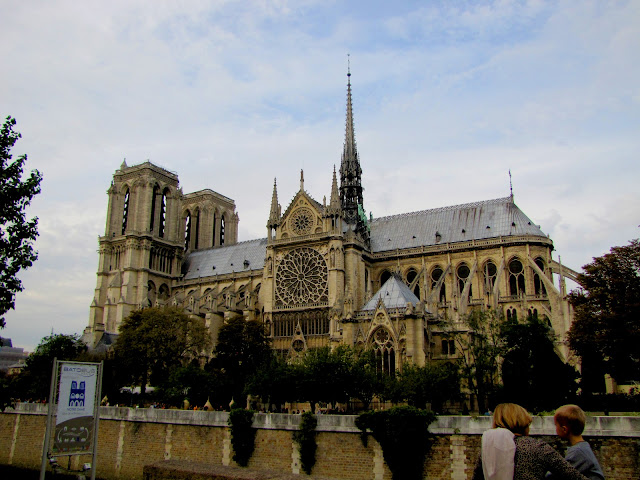 Happy Conversation Near the Books Stalls 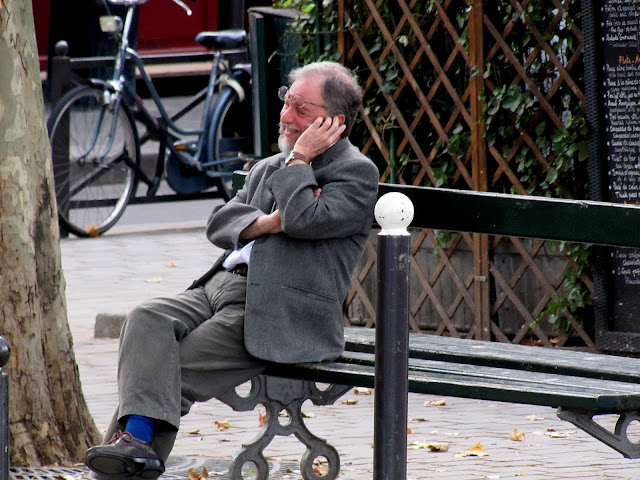