The last week has been a week that I am glad is over.  Deaths of friends and loved ones, frigid weather, air you can’t breathe and the continued ineptitude and childishness of the US Congress. I wish the politicians would not piss me off so much but they do. I must stop watching these news shows.  After a day at work with the normal stresses of work and life, for some no good reason I watch the cable news shows and by the time I go to bed I feel beat up.  I have not even been writing in this blog lately.  Every time I start to write only the only thing I can think about are negative things.   Further, it has been kind of lonely in the Bud Cave with the Lovely Sharon out of town.    I needed something to pick up my spirits a little.


I was working at home the other day, drafting contracts in the Bud Cave and I had the TV on for background noise.  There were four movies about Rome on in a row and a 10 minute travelogue about Rome.  It made me think about the many beautiful fountains in Rome.  The thought of the large, beautiful and historic fountains, works of art, made me feel a little better about life.  I recalled standing by these fountains, amazed at their beauty and amazed that anyone could really create and build such moving works of art.


I know it is a tourist place but Trevi Fountain is beautiful.  I like to sit at the Trevi Fountain with all of the other tourists and watch the fountain and watch the people.  It’s a gathering place; a spectacular gathering place.  I have sat at the fountain in the day and at night.  It is amazing in any light.  I found the following from       http://www.trevifountain.net


The Trevi fountain is an imposing fountain that served as a display of an ancient roman aqueduct termination.  The acqueduct is the Virgo - Virgin in English - Aqueduct constructed by Marcus Vipsanius Agrippa around 19 B:C: Agrippa was the son-in-law and the favorite general of Emperor Octavian Augustus. The aqueduct was 21 km long but 19 were underground.  The aqueduct was built by Agrippa to supply the thermal baths he built in the Campus Martius, by the Pantheon. There was a fountain at the end of the aqueduct already then. The display spilling water was located on the site of the actual Church of St. Ignatius.


According to Sextus Iulius Frontinus' specialised book "De aquaductibus Romae commentarius", the acqueduct takes its name from a virgin lady that the Roman soldiers met when they were thirsty and tired. She lead them to a source of water to restore. That source was in the Ager Locullanus, the land between the Tiburtina road and the Collatina road, two of the many roads that led to Rome. That source still today supplies the acqueduct.


In the 4th Century there were in Rome 1352 fountains. The aqueduct was damaged by the invasion of the Ostrogoths led by King Vitigis in 537. After the barbaric invasions the last portion of the aqueduct was abandoned and all the medieval restorations did not continue further than the trivium crossing.  Starting from the early renaissance the popes start to decorate the end of the aqueducts they restored with large fountains that were richly decorated.
Trevi Fountain: 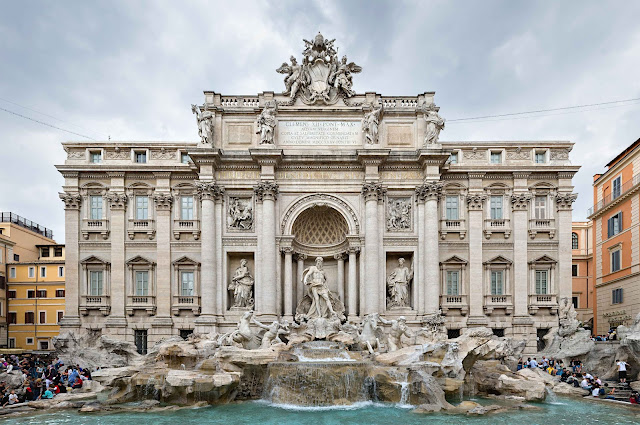 My favorite piazza in Rome is no doubt the Piazza Navona. The following description is from Frommers


Piazza Navona, one of the most beautifully baroque sites in all Rome, is an ocher-colored gem, unspoiled by new buildings or traffic. Its shape results from the ruins of the Stadium of Domitian, lying underneath. Great chariot races were once held here (some rather unusual, such as the one in which the head of the winning horse was lopped off as it crossed the finish line and was then carried by runners to be offered as a sacrifice by the Vestal Virgins atop the Capitoline). In medieval times, the popes used to flood the piazza to stage mock naval encounters. Today the piazza is packed with vendors and street performers, and lined with pricey cafes where you can enjoy a cappuccino or gelato and indulge in unparalleled people-watching.


In addition to the twin-towered facade of 17th-century Santa Agnes, the piazza boasts several baroque masterpieces. The best known, in the center, is Bernini's Fountain of the Four Rivers (Fontana dei Quattro Fiumi), whose four stone personifications symbolize the world's greatest rivers: the Ganges, Danube, della Plata, and Nile. It's fun to try to figure out which is which. (Hint: The figure with the shroud on its head is the Nile, so represented because the river's source was unknown at the time.) At the south end is the Fountain of the Moor (Fontana del Moro), also by Bernini. The Fountain of Neptune (Fontana di Nettuno), which balances that of the Moor, is a 19th-century addition.


On two occasions I have enjoyed a dinner in the Piazza Navona, sitting outside watching the people stroll through the Piazza.  Each time after dinner I spent time looking at the people and the fountains my favorite of which is Bernini's Fountain of the Four Rivers. 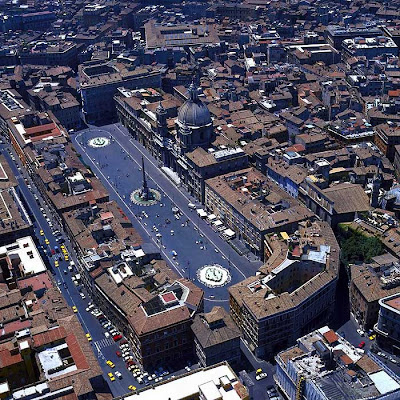 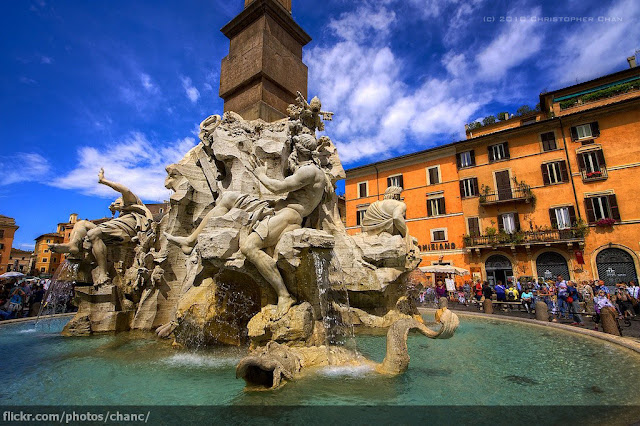 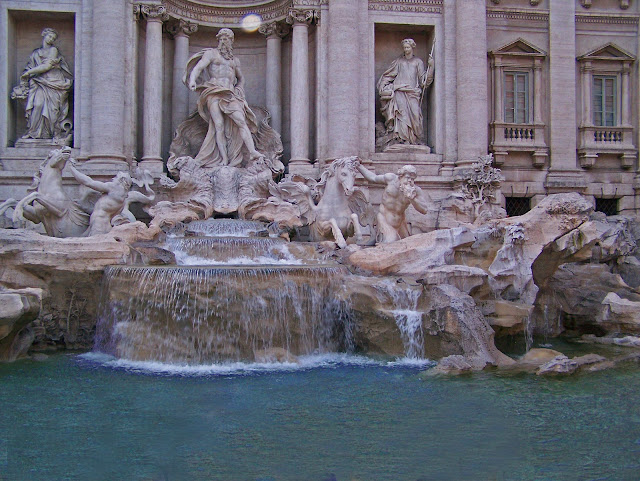 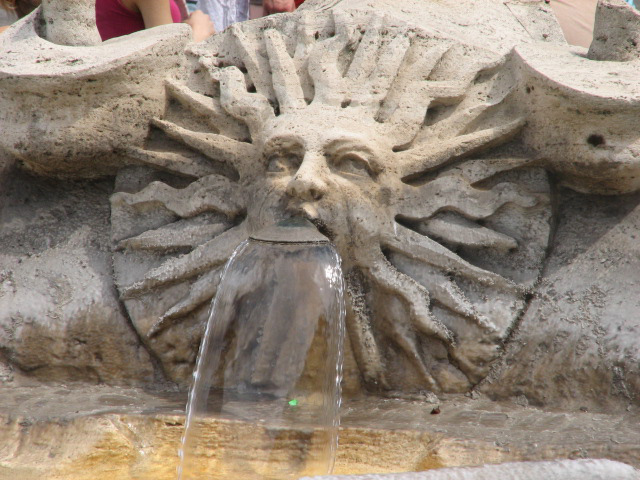 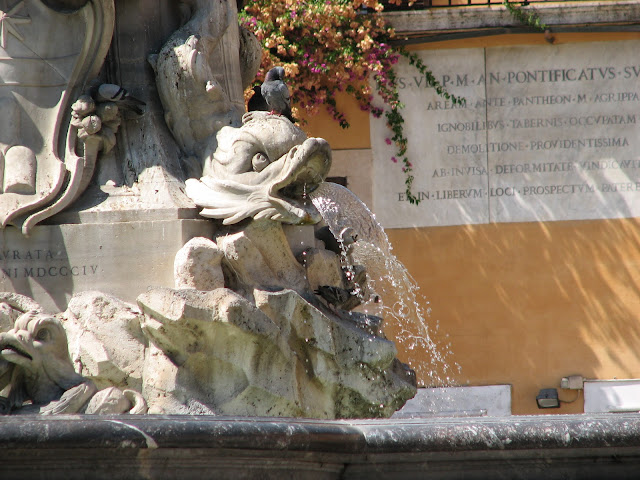 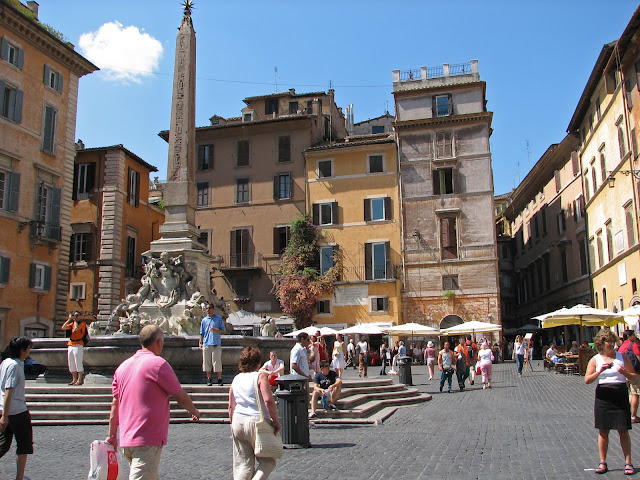