A year or so ago, I posted a picture of a painting done by American Impressionist, Childe Hassam.  In the Bud Cave, I have a large coffee table book about Childe Hassam.  I was looking at it again last night and it made me realized how much I like his work.  I know nothing about art, but I do love paintings, photographs and sculptures.  I have read some about the artists whose work I particularly enjoy.

The following information is from http://www.childehassam.org/

Childe Hassam(October 17, 1859 – August 27, 1935) was a prominent and prolific American Impressionist painter, noted for his urban and coastal scenes. Along with Mary Cassatt and John Henry Twachtman, Hassam was instrumental in promulgating Impressionism to American collectors, dealers, and the museums. He produced over 3,000 oil paintings, watercolors, etchings, and lithographs in his career, and was a founding member of The Ten, an influential group of American artists of the early 20th century. His most famous works are the “Flag” oil paintings, completed during World War I.

Childe Hassam was born in Dorchester, Massachusetts. He studied at the Boston Art School, was apprenticed to an engraver from whom he learned the techniques of engraving, and thus began his career as an illustrator. He went to Paris, in 1883, and studied with two academic artists, Louis Boulanger and Jules Joseph Lefebvre. His fellow student, during this period, was the American John Henry Twatchman who had previously studied in Munich. These years in Paris, occurring as they did when Impressionism had reached its peak of influence, were important to Hassam. When he returned to America, he began to paint in the Impressionistic style and, in 1898, he joined with Twachtman, J. Alden Weir, and seven other American artists to form a group called "The Ten". Their purpose was not merely to exhibit jointly but also, by so doing, to revolt against the stifling force of accepted academic styles-in a certain sense, they wanted to do for American art and taste, what European artists were accomplishing abroad.

The Americans had a more difficult task, for the history of art in America was still quite brief and the American tradition was principally one of imitating conventional, accepted, "safe" artists. Hassam was a resident of New York City and his favorite subjects were aspects of New York life, which he presented with a light, sparkling palette, endowing streets and buildings with the light and color inherent in Impressionism. He also painted some rural New York and New England landscapes with the same light touch. His work was so pleasant that it was readily accepted and Hassam received many prizes and awards as well as being elected to the National Academy in 1906. In 1915, at the age of fifty-six, he turned to the technique he had learned as a very young man and began to work as a graphic artist. Before his death he had completed over 350 plates, both etchings and lithographs. In these, using only black and white, he sought to achieve the effects of sunlight, as he did in the oil paintings upon which he also continued to work.

Without a doubt, Childe Hassam is America's favorite Impressionist. One might argue Impressionism is the world's most loved art movement and that therefore, Hassam is amongst the most celebrated of all artists born on U.S. soil.

Here are a couple pictures of his paintings: 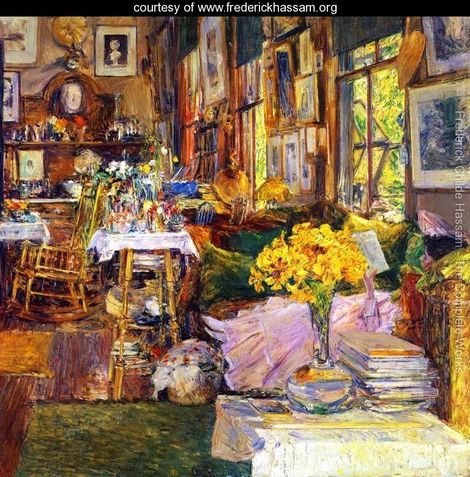