Not Another On-Time Departure

I have been on hundreds of airplane flights during the last 35 years.  I am certain that I averaged 15 trips (business and personal) per year for the last 35 years multiplied by two for flights coming and going, that totals up to 1,050 flights.  However, some trips included connecting flights and therefore, there were more than two flights for those trips. Whatever the number is, I have been on a lot of flights.  With that many flights you would think that things have gone wrong on some of them.  They have.  I have all kinds of mechanical problems, delays, lost luggage, golf clubs sent to the wrong city and cancellations. The Lovely Sharon thinks I am an airplane jinx.  I might be.


I had a flight once on a DC 10 from San Diego to Salt Lake City that was initially delayed because a stabilizer was broken,  I don’t know what a stabilizer is but it sounds relatively important don’t you think?  The flight was scheduled to leave San Diego at 8:30 pm or so and was delayed for something like an hour and a half while they worked on that issue.  The gate attendant finally announced the repairs had been made and we boarded the plane.  Once we were on the plane, we sat for another 30 minutes wondering what was going on.  Finally they announced that one of the doors (that opened vertically disappearing up into the side of the plane) was stuck open and they couldn’t close it.  You cannot fly at high altitude with an open door so we sat for another 45 minutes until they figured at how to close the door.


Another trip that I was on was delayed because one of the toilets was not working.  They had to bring a toilet repairman on board to fix the toilet.  That took about a half hour.


Another plane that I was on had a pilot who did not like his pilot's seat in the cockpit.  They brought in another seat that was also not to his liking and still another seat which he found acceptable.  Big delay.


I was on two flights over an 18 month period where a flight attendant erroneously activated the emergency chute at the gate in Salt Lake.  In each case it took about 45 minutes to repack and get the paperwork done.


I was on a plane at the gate in West Palm Beach where cockroaches or some other type of big bugs were loose on the plane and they had to bring on someone to round them up.  The cockroach roundup was in coach and I, thank goodness was in first class, where I belong but seldom am.  Before the cockroach roundup guy came to the rescue, I could hear people in coach yelling “COCKROACH” followed by foot stomping.  The pilot finally announced we had a small infestation problem and that an expert had been called.  Almost an hour later we were airborne.  Fifteen minutes or so after flying the friendly skies, a green thick liquid, almost like wet Jello, started dripping from the lights and air vents above our first class seats onto the passengers, including me.  Finally the pilot (yes the same fellow who had previously announced the infestation problem) announced that


”for those of you in first class, don’t worry about the green drippy stuff, we think it is just condensation with dust in the overhead bins.  If it gets on your clothes, let us know and we will get you cleaning certificates”.


The dripping finally stopped.  It occurred to me this was like an Old Testament flight, first a plague of locusts and now a plague of green slime.


I was on another flight  that took off for Salt Lake City from Ontario, California.  Ten munutes or so into the flight an announcement was made to inform us that the crew could smell smoke and we needed to go back to make certain an engine was not on fire. We arrived to fire trucks, amubulances and men in asbestos suits,


I have a lot more stories, however, Thursday’s flight from Salt Lake City to Ontario, California, had its own unique comedy.  I arrived early at the airport for an 8:30 am flight.  I went to the Delta Crown room and read the paper.  I finally walked to the gate, B-13, and was surprised that the plane was not at the gate even though we were supposed to depart in 45 minutes.  The gate agent said the plane had just landed and that we should be boarding shortly.  The plane arrived at the gate and the onboard passengers got off of the plane.  I assumed we would have 15 minutes or so while they serviced the plane.
After 30 minutes an announcement was made that an air conditioner valve was not working and they were taking a replacement part off of another plane and then the mechanics would put it on our plane and after the paper work was done we would board and leave.  After another 15 minutes were told they were still working on it.  After another 15 minutes they told us it was taking too long and that instead of  us taking that airplane, which was at Gate B-13, we would now be taking an identical plane that was at Gate B-10, just across the concourse.  I had not checked luggage, so it was easy to walk (40 feet from the east side of the concourse to the west side of the concourse).  For those who had checked golf clubs and luggage, these items were removed from the Gate B-13 plane and put on the Gate B-10 plane.


fter another 20 minutes or so, the rest of us were allowed to board the plane.  Once on board there seemed to be no rush to get people seated so that we could quickly leave to make up for lost time. That seemed odd to me and I suspected there was some other issue. The front door of the plane remained open and after another 15 minutes or so, the pilot announced that a red warning light on one of the engines had come on and had been looked at by the mechanics.  However, he did not know where the mechanics were and they had not brought back the paper work to allow us to depart.  In another 15 minutes, the pilot made another announcement, that the mechanics were still not located.  The pilot then stated that in previous years, they would have flown even with the red warning light but that protocols had changed and we could not leave until the issue had been resolved.


After another 10 minutes still no mechanics.  This was not looking good.  Then they started removing the checked luggage and golf bags from this Gate B-10 plane that we were sitting on, putting it on the luggage trucks.


We gathered our bags from the overhead bins, left the Gate B-10 plane and we all walked together back to Gate B-13.  Gate B-13 was packed with people inasmuch as a flight from Salt Lake to Kansas City had been assigned to take the Gate B-13 plane when our flight was moved to the Gate B-10 plane. But now we were taking the Gate B-13 plane, after all it was our rightful plane, and to hell with the Kansas City passengers.  If all of these gate references are making your head spin, think about us passengers moving gate to gate to gate.   A new announcement was made.


“For those of you going to Kansas City, your flight is now leaving out of Gate B-10 just across the concourse, please got to that gate for boarding.”


Those of us, who hoped to eventually get to Ontario, had mixed emotions for the Kansas City passengers.  Some of us were chuckling under our breath knowing the Kansas City passengers were heading over to Gate B-10 and a broken plane, others felt compassion for their plight (“plight” not “flight” inasmuch as there did not seem to be too much flying going on here).  I was thinking “you poor bastards” you don’t know what awaits you, good luck”.


After another 15 minutes waiting in line at Gate B-13, we boarded the Gate B-13 plane and finally left the gate, taxied and took off.


After we were in the air, we had another announcement that told us that if we wanted to use the onboard Wi-Fi for our phones, computers and Ipads we could do so for a fee.  Also if we wanted wine or cocktails it would cost $7.00 each.  You would think that after all of the horseshit they just put us through over the last, almost two hours, they would be pouring free drinks and giving free Wi-Fi, but no, there would be no freebies on this flight.


As we were in the air headed to our destination, it occurred to me that when I am on a flight that leaves on time, they smugly announce “Another on time departure”.  Since they do this when there is an on time departure, I feel like they should be required to announce something like for our flight:


“We just screwed up two airplanes, inconvenienced you, caused you to change gates three times and in general we took two hours from your life that you will never get back. Have a nice flight and enjoy yourself wherever your final destination is today.”
Here is an appropiate Delta Airlines ad: 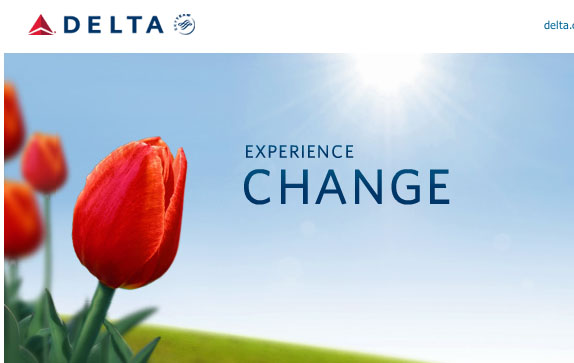