Carson Daly, Jim Nabors and Forces of the Universe


Friday I was at Ironwood Country Club in Palm Desert.  My tee time was at 9:24 am.  I decided to drive the golf cart to the club early, have breakfast at Spike's (the halfway house) and read the paper.  The Lovely Sharon said she would drive the car over later as she was still getting gussied up for the day. So I headed over to the club.

When I got to Spike's I ordered the All-American Breakfast- two eggs scrambled, hash browns, link sausage and toast. I order the same breakfast everytime I eat breakfast at Spike's.   As I ate breakfast, I read the Desert Sun (the local paper) and I said "Good morning" to various friends who came into Spikes for coffee or something to eat. A pleasant but normal breakfast event at the club.

As I was walking out of Spike's I saw a Desert Golf Magazine on the top of a stack of newspapers and magazines on a cupboard.  I picked it up and was looking at the cover as I walked out of the restaurant toward my golf cart.  I saw that Carson Daly was on the cover of the magazine.  Carson is a well known TV and radio personality and is the host of the popular TV program "The Voice".  I had never met Carson but I had seen him a time or two at the Club inasmuch as his parents are members.

I was concentrating on the cover of the magazine as I was walking and when I looked up, there was the real life Carson standing there in his golf clohes.  He had apparently finished playing the front nine and was getting a water refill for the back nine.  I looked at him standing there, I looked at him on the magazine, I looked at the real him again, and then I looked back at him on the magazine.  I finally said hello and we spoke for about 3 minutes.  He was very gracious and nice.  He went on to the 10th tee to finish his round with his foursome. 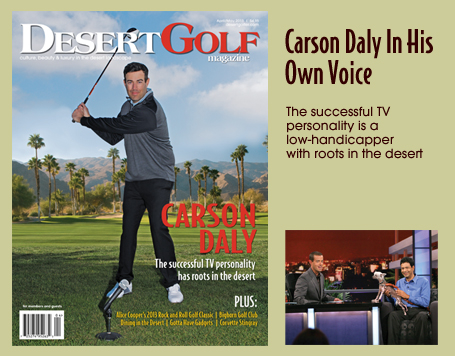 The interesting thing to me was not that I saw Carson Daly at Ironwood Country Club, I had seen him there a couple of times in the past.  The interesting thing was that somehow, through my mojo or the power of the universe or the alignment of the stars and the planets, I was looking at Carson Daly on the cover of a magazine and when I looked up there he was in the flesh.  I suppose I should say there he was in his golf clothes and golf shoes. But still, it was cosmic occurence. It is kind of like finding the image of Jesus on a pancake, or the image of the Virgin Mary on a tree stump.

An even better example is the time I was standing at the urinal in the men's room at a night club/restaurant in Honolulu and realized that the fellow next to me at the adjacent urinal was Jim Nabors.  Jim Nabors was the star of Gomer Pyle, USMC, a TV series in the 1960's.  Before that he was on the Andy Griffith show.  If you recall, Gomer was famous for saying "Golly".  Well as I was standing there at the urinal, I looked at him, he looked at me, we nodded to each other in some sort of acknowledgement that he, a star and me a nobody, were answering the call of nature at the same time at the same restaurant in beautiful Honolulu.  I couldn't help myself, I had to look down at the part of his body that he was holding, which was the same part of my body that I was holding.  After a brief and I hoped, a non-obvious peak at Jim's neighbor, I zipped up and said "Golly".  We both washed our hands and walked out of the rest room to our respective tables.  That too was a cosmic event.


Anyway, I diverse, back to Carson Daly. After Carson had left for the 10th tee. I had not moved and was still standing there looking at the magazine cover with Carson on the cover. I thought about the forces of the universe that had brought him to me just as I was looking at his photo on the cover of  a magzine. What were the odds of that happening. Astronomical no doubt but yet it still happened.

It  occured to me that I should return to Spike's immediately and see if there was a Sports Illustrated Swim Suit Issue or a Victoria's Secret Catalogue in that stack on the cupboard.

Who knows.  If it worked once, it might work again.