Today “Barbie’s Dreamhouse” opens in Berlin, Germany.  Yes it’s that Barbie. Barbie doll Barbie made by Mattel since 1959.  The Barbie dolls your sisters and your mother’s played with. The Barbie your daughters and granddaughters, play with.  It is that Barbie whose boyfriend was Ken.
The Berlin Dreamhouse is a 27,000 square foot portable mansion. 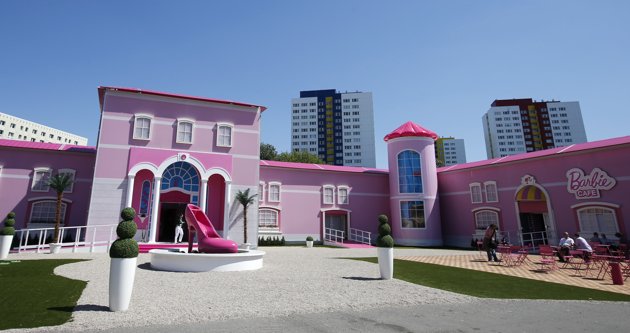 Apparently left-wing feminists (mern and women) are going crazy over Barbie’s Dreamhouse, protesting its existence, The following information is from:


When Europe's first Barbie Dreamhouse Experience attraction opens in Berlin on Thursday, a number of young girls will probably be eager to get inside. But they'll have to get through the crowd of feminist protesters first.


Culminating weeks of criticism, feminist groups plan to demonstrate outside the giant pink mansion to call attention to what they say is a sexist role model that embodies the "pinkification" of childrens' toys. It certainly won't be the first time that the blonde, anatomically impossible doll has drawn the ire of gender rights activists, but something about the attempt to make the fantasy into an actual "experience," as the Barbie Dreamhouse organizers call it, seems to have hit a nerve.


Coverage of the attraction -- which features an "endless" closet, cupcake baking kitchen, fashion runway and pop-star karaoke stage -- have been decidedly less flattering than the Barbie outfits on display there. "Glitz, Glamour, Ghastliness," read a Wednesday headline in the Berliner Zeitung newspaper, which went on to describe it as a "horror house" where the overwhelming prevalence of pink actually puts visitors in a foul mood. "It is exactly as the harshest critics predicted -- a pink-colored, sparkling world of beautiful illusion. A superficial nightmare in pastel," the paper said. The dollhouse for humans is a "Hell in Rose Pink," a headline in daily Süddeutsche Zeitung said last week.


In a SPIEGEL ONLINE editorial over the weekend, author Silke Burmester accused Christoph Rahofer, the head of EMS, the Vienna-based marketing firm behind the Barbie world, of creating a place to educate young girls in the arts of superficiality. "Not many women have the possibility of creating such a life for themselves," she wrote. "All the better that you, Mr. Rahofer, have now given children the chance to taste the sweet nectar of life as a doll. When else will they find the incentive to focus all of their energy on appearances, working ceaselessly for perfection, if the foundations aren't laid in their childhood days?"


Occupy Barbie Dreamhouse, a group set up in March by Michael Koschitzki, a member of the far-left Left Party's youth organization, has spearheaded the protest movement against the Dreamhouse, printing thousands of flyers and calling on fellow feminists to gather outside for speeches and protest outside the temporary attraction on Thursday. "We don't want young girls exposed to sexist propaganda already at an elementary school age."

The group says its protests aren't targeted at parents who bring their children to the Dreamhouse, nor the children who enjoy playing with Barbie dolls, the group says. "Our protest is directed against the perception of women that is being propagated by the Barbie Dreamhouse in Berlin, and against the exhibition of the social conditions that it represents, namely that the role of a woman is to always look good, and to cook and clean."


Occupy Barbie Dreamhouse, whose name is a nod to the anti-avarice Occupy Wall Street movement, will also be joined by the German chapter of Pinkstinks, a group that campaigns against products, advertising and marketing they claim contribute to the limitation and "pinkification" of gender roles. "Pink is a wonderful color," the group's founder Stevie Meriel Schmiedel told news agency DPA last week. "But the pinkification of toys stinks. This color stands only for being cute and sweet and outward."


The youth chapter of the environmentalist Green Party on Wednesday also encouraged anti-Barbie protesters to come out for the opening, releasing a statement that called for the doll to be banned, saying she not only undermines gender equality, but also "projects sexist roles and leads to eating disorders."


Located near Alexanderplatz, a main shopping hub in central Berlin, the 2,500-square-meter Barbie Dreamhouse Experience will charge €15 for adults and €12 for children ($19 and $15, respectively), and remain open until Aug. 25, when it will move on to other European cities. Dreamhouse creator Koschitzki, a father of two young girls, told SPIEGEL last month the attraction was "just about having fun," and called the protests "totally unnecessary."


Mattel, the US toymaker that has been producing Barbie dolls since 1959 and issued a license for the project in Berlin, has likely become accustomed to criticism of what the doll is perceived to represent. Indeed, "Barbie has again become a tool for some to advance their own agenda," a spokesperson for the company's German unit told news agency AFP.


My Take On Barbie Dreamhouse Protesters


So we have protesters who don’t like the Barbie lifestyle. We have protesters who don’t want a pinkifcation of toys since its stands only for being cute and sweet and who could possibility be in favor of sweet and cute.  Ruthless and ugly would be so much better don’t you think.  We also have the Green Party claiming Barbie and the Barbie Dreamhouse "projects sexist roles and leads to eating disorders."


These protesters could protest the oppression of Muslim women prevented from getting educated or stoned to death for some transgression.  Or they could protest the recent rapes of young women in India.  They could protest female genital mutilation which is practiced mainly in 28 countries in western, eastern, and north-eastern Africa, particularly Egypt and Ethiopia, and in parts of Asia and the Middle East.  They could protest the plainting of land mines. They could protest hundreds of issues but they have dedicated themselves to protesting Barbie’s Dreamhouse.
I am not certain this is a cause I would donate to or take time off work for.  Although,  I have blogged before about women protesting something by going topless, see  http://www.bheadman.com/2012/01/topless-protest.html


I encourage all women protesting the Barbie Dreamhouse to remove their blouses and bras and protest topless. If they agree to this, I will be right there with them on the front line of the protest.