I just finished reading one of the best novels I have read in awhile.  It was Ordinary Grace by William Kent Krueger. Here is an overview from Amazon:


New Bremen, Minnesota, 1961. The Twins were playing their debut season, ice-cold root beers were selling out at the soda counter of Halderson’s Drugstore, and Hot Stuff comic books were a mainstay on every barbershop magazine rack. It was a time of innocence and hope for a country with a new, young president. But for thirteen-year-old Frank Drum it was a grim summer in which death visited frequently and assumed many forms. Accident. Nature. Suicide. Murder.

The story is about the family of a Methodist minister, two boys, 13 and 11, and an 18 year old sister.  The events of the book in a small town in Minnesota are written in such a way that you can feel the small town in each word on the page.  You can clearly imagine the railroad track that is an important character of its own in the book.  Its not a mystery or a suspense novel but is the story of  the frailities and shortcomings of people, of boys growing up over the course of the summer, and tragic loss. Its epilogue is looking back 40 years after the summer of 1961.

I have read several books written by William Kent Kreuger but this one was particularly poignent and worth the read. 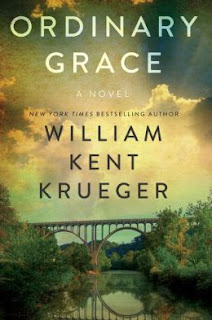 That was it. That was all of it. A grace so ordinary there was no reason at all to remember it. Yet I have never across the forty years since it was spoken forgotten a single word.”