The Lovely Sharon and I watched the US Open part of Friday and all of Saturday and Sunday.  What a great and exciting tournament.  I watch it every year.  I wanted Phil Mickelson to win.  He has been so close, so many times, I really thought that this was the year he would win.  It was Phil's birthday, it was Father's Day, he had played soundly all week. All these seemed to be omens for his victory.  And now, after three difficult rounds , Phil was in the lead.  But sadly, on Sunday, he faltered.  Watching Phil play, and wanting Phil to win, puts a fan on an emotional roller coaster.  He  hits great shots and then hits absolutely terrible shots.  He hits a 270 yard approach shot to four feet and then misses the four foot putt.

What does he do on the 10th hole? He flies one in from the rough almost 80 yards from the hole, a dunk, an eagle 2 and you now are back to the land of false hope. You think "the momentum has changed, the winds of victory have shifted directions, there is the smell of victory in the air for Phil".

He hangs for several holes, without a disaster but then he comes to the 121 yard, par 3, 13th hole and you think, that he can really get this one close and he can  make another birdie on this tiny hole.  He can hit one of his five wedges to four feet and ram a birdie put in and cement a victory.  But no; he blasts it over the green, over a bunker, down a hill, into nasty 5 inch rough.  He now has an impossible shot and makes another bogey on a potentially birdie hole. Frankly I could hardly get out of my vintage leather chair after this hole (for purposes of this blog entry "vintage" means old with holes in it).  I was stuck. I was immobile. It was like being told you had three months to live and thinking "why bother".

Oh Phil, dear Phil, you are making us crazy.  I can hardly bear to watch.  I know you will do something great, something unbelievable and then, like a coffee cup teetering on the edge of the table, I know it will ultimately come crashing down, and it does.

I know you are heart broken, but after the tournament, you left for home in a private jet, your personal private jet with your own pilot.   The Lovely Sharon and I had to walk up from the Bud Cave to the kitchen and make dinner.  Yes Phil, we made dinner alright, but as we worked,  as we grilled the pork tenderloin, and as we husked the corn for corn on the cob, we had a bad taste in our mouths from your downfall.  A usual Sunday evening meal did not taste like it should have. The only salvation for us was sharing a bottle of Cakebread Winery Chardonay with our al fresco dinner and for our after dinner conversation. It helped.

Phil, I can hardly wait for next year's U.S. Open.  I know you will be in the hunt,I know next year will be your year. 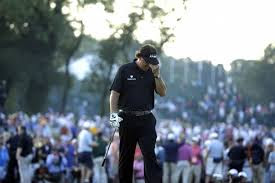 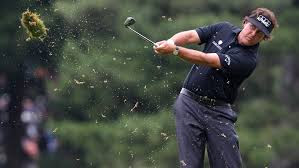