The Tender Hour of Twilight

I have not read as much as usual over the last month or so.  I finished a book entitled The Tender Hour of Twilight (Paris in the 50’s, New York in the 60’s- A Memoir of Publishing’s Golden Age). The author was Richard Seaver. The book was published in 2012 and I don’t recall how I became aware of the book but I did and I ordered it on line.  Seaver died before the book was published.  He had written a memoir of more than 900 pages and after his death, his wife, Jeannette, edited into a very readable 440 pages.

Seaver, an American, graduated from the University of North Carolina, move to Paris in the early 1950’s. He  and others  put out a literary quarterly and eventually became book publishers.

The book is an interesting history of Paris in the 1950’s, especially literary Paris and artistic Paris.  Seaver, met and fell in love with Jeannette, a beautiful French girl and the love of his life.


In the 1960’s the Seavers moved to New York where they continued life and business in the world of publishing.

During his career he was involved with books that, at the time, were deemed scandalous and were banned in many countries.  The books included Henry Miller’s Tropic of Cancer and Tropic of Capricorn and D. H Lawrence’s Lady Chatterley’s Lover.


Seaver is called the discoverer of author Samuel Becket. He published the autobiography of Malcom X.


I suppose what I liked best about the book was the picture it painted of Paris in the 1950’s and New York in the 1960’s.  Not just a personal history of Seaver, but a history of the times, presenting the flavors and colors of Paris and New York.


Here is part of a review of the book from the Washington Post that can be found at
http://articles.washingtonpost.com/2012-02-01/entertainment/35444185_1_seaver-barney-rosset-jeannette-medina


While a young man (Seaver)  in Paris, preparing a Sorbonne thesis on James Joyce, he happened upon — and was bowled over by — the fiction of a middle-aged and virtually unknown Irishman. With dogged persistence, Seaver urged the work of Samuel Beckett on his friends, with some of whom he edited a small English-language magazine called Merlin. In due course, Seaver and his colleagues printed Beckett’s short stories in the magazine, translated some of his French fiction into English and published the early novel “Watt.”


In “The Tender Hour of Twilight,” Seaver looks back on these two heady periods of his life. In the first half, he re-creates the excitement of living in Paris as a young man, growing fluent in French, traveling around Europe and falling in love with several free-spirited young women. “Thirty cents a day would get you a hotel room — not with bath, mind you . . . The room had a bed, a basin, a table, and a chair. Around the corner were the public baths, where for a few francs you could take a scalding-hot shower. Payment by the quarter hour. . . . If your budget was really tight, you could take a douche double, two for the price of one, the sex of your co-showerer up to you, no questions asked by the management.”

In those days, 25 cents would buy you a liter of red wine from a cask — if you brought along your own bottle. Over that gros rouge and cheap pasta dinners, the Merlin crowd would gather to discuss their magazine and how they might finance another issue. The regulars included founder Alexander Trocchi, who became a heroin addict and wrote “Cain’s Book” (published by Grove); poet Christopher Logue, now remembered for his modernized versions of several sections of “The Iliad”; Patrick Bowles, co-translator with the author of Beckett’s “Murphy”; and the elegant Austryn Wainhouse, who rendered the major works of the Marquis de Sade into English. As Wordsworth wrote of his own time in Paris, “Bliss was it in that dawn to be alive / But to be young was very heaven.”


n these pages, Seaver describes meeting the disturbingly walleyed and intimidating Jean-Paul Sartre, being charmed by Orson Welles and becoming friends with the painter Ellsworth Kelly (whom his then-girlfriend tried to seduce, even after Seaver pointed out that Kelly was gay). But none of these eminences prepares Seaver for Brendan Behan, the former Borstal boy and a legendary drinker even by Irish standards. Shortly after Behan storms into Seaver’s life, the playwright asks — at 4 in the morning — if there might be “anything to eat handy?” While devouring Camembert cheese and sausages, he solemnly intones, between mouthfuls, that “food . . . is the great enabler.” Seaver is impressed by the phrase but asks his unwelcome and temporary roommate what it means. “To get on with the drinking,” Behan slurs back. “Without food you pass out much too quickly.”


If you’re at all interested in modern literature, Paris, the 1960s or the “golden age of publishing,” you won’t want to miss “The Tender Hour of Twilight.” 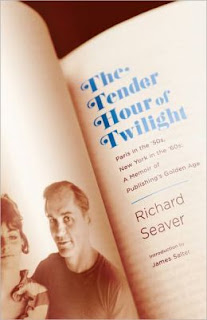 I thought the book was terrific and highly recommend it.