I just finished reading a biography about Ian Fleming written by Andrew Lycett.


Ian Fleming was the author of the James Bond books and stories.  As teen age boy (my young teens), I read the James Bond books.  I loved them.  I have been a lifelong fan of the James Bond movies.  I have seen them all several times each and I am always excited for a new one to come out.  My favorite James Bond actor is Sean Connery and my next favorite is Daniel Craig.
The biography by Lycett is approximately 460 pages and is a good read.
I learned from the biography that Chitty Chitty Bang Bang was a short story written by Fleming for his only son Caspar that was later turned into a movie and stage musical.  The Lovely Sharon and I saw the musical on the stage in London a few years back.
I found the following biographical blurb about Fleming at:
http://www.ianfleming.com/ian-fleming/
Ian Lancaster Fleming was born in London on 28th May 1908, the second of four brothers. He was educated at Eton College and then abroad in Germany and Austria. After an early career at Reuters news agency, he became a stockbroker. During World War 2 he worked throughout as assistant to the Director of Naval Intelligence in the Admiralty in London, privy to many secrets. It was his experience in this job that was to provide many of the characters and incidents that he was to write about later in the Bond books. Following the war he became foreign manager, in charge of foreign correspondents, for Kemsley newspapers, owners of the Sunday Times and other papers. But his creative imagination remained under wraps until 1952, when, at the age of 43, he settled down in his house in Jamaica, and produced – in not much more than two months – Casino Royale, the first adventure of James Bond. He published a further thirteen James Bond titles. He married Anne Rothermere in 1952 and in August that year his only son, Caspar, was born. While convalescing from his first heart attack in 1962, he wrote a short story about a flying car for Caspar – Chitty Chitty Bang Bang. Ian Fleming died, aged 56, on 12th August 1964 at Sandwich in Kent.
Fleming was a great womanizer and seemed to have dozens if not hundreds of one night encounters, short term affairs and long term affairs. Fleming loved to sail and he loved golf. He was a live long member of several of the London's famous men's clubs where those with pedigrees and/or money congregated for drinks, lunch and dinner. One of the Clubs was Boodles. Boodle's is a Private Members' Club, founded in 1762 by the Earl of Shelburne, later the Marquess of Lansdowne and Prime Minister. The Club was originally located at 49-51 Pall Mall, and moved to its present premises at 28 St. James's Street in 1782. The Club was named after its Head Waiter, Edward Boodle. So Boodles has been at the same location since 1782.
He was married once, to Anne Rothermore,  with whom he had a multi year affair while she was married to Esmond Cecil Harmsworth, 2nd Viscount Rothermere.  Ulitmately Fleming and Anne had affairs with others during their stormy marriage but they were still married at the time of his death.
One of the parts of Fleming's life I found interesting was his many friendships and interactions with so many well known people:  Noel Coward and Evelyn Waugh ( Brideshead Revisited), Raymond Chandler and dozens and dozens of other people that from the 1920's to the 1960's were on the front page of the news. He seemed to have a regular flow of celebrity guests at his house in Jamaica.
Flemings' life reads like a novel.  If you have the time and if you are a James Bond fan you might want to undertake to read this biography.
Ian Fleming
﻿ 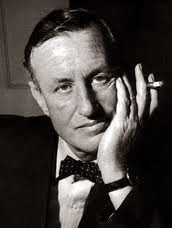 If it weren't morning I might have a martini, shaken, not stirred.
Posted by Bud Headman at 6:43 AM