What is all this fuss about Santa Claus being white and not black.  Like many of these meaningless controversies they seem to start at Fox News or blown out of portion by Fox News.  The big question is who gives a sh*t.  With all of the issues in the country and in the world, what I wonder why black vs. white Santa is even discussed.

Santa Claus was apparently based on St. Nicholas.  I found the following on cbn.com:

The story of our modern Santa Claus begins with this same Nicholas, who was born during the third century in Patara, a village in what is now Demre, Turkey. His wealthy parents raised him as a Christian. But they died in an epidemic while Nicholas was still young, and he was left with their fortune. Obeying Jesus' words to "sell what you own and give the money to the poor," Nicholas used his inheritance to assist the suffering, the sick, and the poor. During the persecution of Christians by Roman Emperor Diocletian, Bishop Nicholas was exiled and imprisoned along with thousands of other Christians. Though he suffered for his faith in Jesus Christ, mercifully Nicholas survived this persecution and was eventually released.

After returning to his post as bishop, Nicholas was called upon to defend Christianity against the heresy of Arianism. A contemporary of Nicholas and an early church theologian, Arius taught that God the Father and God the Son did not exist together eternally. Arius also taught that the pre-incarnate Jesus was a divine being created by (and possibly inferior to) the Father at some point, before which the Son did not exist.

Tradition tells us that Nicholas vigorously fought Arianism, and was listed as a participant in the First Council of Nicaea. This important gathering, held in Nicaea in Bithynia (present-day Iznik in Turkey), was convened by the Roman Emperor Constantine I in 325 A.D. This was the first ecumenical council of the early Christian Church, and it produced the first uniform Christian doctrine -- the Nicene Creed.

According to the Saint Nicholas Center Web site, after the American Revolution, New Yorkers were looking to break with British tradition, and they remembered with pride the colony's nearly-forgotten Dutch roots. John Pintard, an influential patriot who founded the New York Historical Society in 1804, promoted St. Nicholas as the patron saint of both the society and the city.

In January 1809, Washington Irving published the satirical Knickerbocker's History of New York, which made numerous references to a jolly St. Nicholas character. This was not a saintly European bishop, but rather a Dutch burgher with a clay pipe. The jolly elf image received a big boost in 1823 from a poem destined to become immensely popular, "A Visit from St. Nicholas," -- now better known as "The Night Before Christmas."

In North America, the popular name Santa Claus was taken from the Dutch Sinterklaas, which originated with a contracted form of Sint Nicolaas (Saint Nicholas). The "Mall Santa" that we are all familiar with -- sporting a red suit with white cuffs and collar, and black leather belt, became the popular image in the United States in the late 19th century and early 20th century because of the "Merry Old Santa Claus" images created by political cartoonist Thomas Nast.

Beginning in 1863, Nast began a series of annual drawings in Harper's Weekly that were inspired by the descriptions found in Washington Irving's work. These drawings established a rotund Santa with flowing beard, fur garments, and a clay pipe. Nast drew his Santa until 1886, and his work had a major influence in creating the modern American Santa Claus.

In the mid-20th Century a series of Coca-Cola advertisements featuring a rotund and jovial Santa Claus was drawn by artist Haddon Sundblom and further popularized Nast's depiction.

There are, of course, controversial aspects of the American Santa Claus fiction. Some Christians believe he takes the focus of Christmas away from Jesus Christ, placing it on a fictional character with little redemptive value. Others insist that it is unhealthy for parents to lie to their children to enforce their belief in Santa Claus. And others say that Santa Claus is a symbol of the commercialization and consumerism that has seized the Christmas holiday in the West. Still for others, Santa Claus and the modern celebration of Christmas is seen as an intrusion upon their own national traditions.

But beneath all the symbolism and tradition that has been attached to the modern American Santa Claus, he, like so many other "Father Christmas" characters before him can hearken back to a simple Christian bishop who loved God and loved people. Bishop Nicholas displayed his love through the giving of gifts, just as our Heavenly Father gave the gift of His Son to us that first Christmas morning 2000 years ago.

In this season, we celebrate how God gave His Son, Jesus, to bring hope to the world. May each of us prayerfully consider how we, like Nicholas, can give of ourselves to help restore hope to those that God brings into our lives.

So now we know.  Santa Claus is from Turkey.  Was he white, was he black, or was he brown. Who cares?  The story of St Nicholas  - Santa Claus is to be cherished.  The men who today represent the image of Santa are from all walks of life and from all backgrounds.  I for one believe in the Christmas Spirit that each Santa brings to us.

Both of these Santa's work for me. 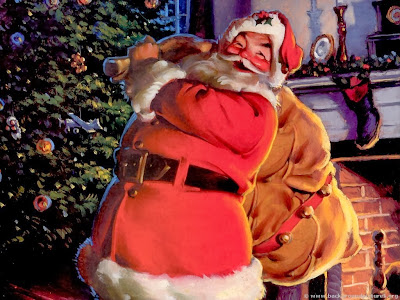 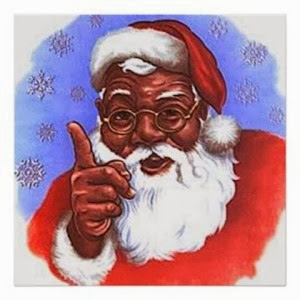