There are products we use every day that make our lives easier.  I am not talking about big obvious things like the car or the plane or the computer but little things like scissors. Think about it, life would be much more inconvenient without the simple scissor. Scissors come in various sizes from tiny to gigantic.  Tiny scissors for your nails, scissors for surgery, scissors for kitchen purposes, scissors for cutting paper, scissors for cutting cloth, and scissors for industrial purposes.
Scissors are used by blue collar workers, white collar workers, by surgeons and by first graders.  I use scissors all of the time to cut articles and ads out of magazines and newspapers.  I love to sit in the Bud Cave on a Sunday morning with the New York Times and a pair of scissors.  I cut book reviews out the New York Times Book Section and stack them up nearby for books I want to read a in the future.  The Sunday New York Times has “New York Times Magazine and T- Magazine and the Sunday Review.  I am always cutting out articles, opinions, editors and ads that have websites.  I do the cutouts so I don’t want to save the entire Sunday New York Times, which as you know is a big paper.  I just want to save 4 or 5 items that I will check out in more detail later.  Ultimately these cutout items will be tossed but for now I will stack them somewhere first and then get back to them.  I can tear these items out of the paper with my hands, but I am not particularly good at that and inevitably I tear part of the article or even if I keep the article or ad intact, I end up with sloppy, jagged edges.
I have a penholder cup on the lamp table next to my ragged leather chair in the Bud Cave.  In it I have a couple of pencils, three or four blue pens, a couple of black pens, a green pen and a red pen or two.  I also have a pair of scissors. I use the scissors to cut out the articles and ads.  I have a similar cup on my Bud Cave desk.
I read The New Yorker Magazine weekly and frequently cut out a cartoon or two.  Earlier this week I mailed my Canadian friend Ray, who lives in Palm Desert, a New Yorker cartoon about Canadians.  He may not like it but I thought it was funny, I cut it out of the magazine with scissors.  A  cartoon I cut out from the New Yorker: 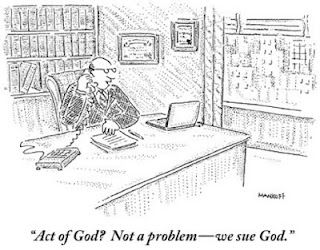 You know those 12 ounce bags of coffee you buy at Starbucks or the grocery store?  I needed to open a new one this morning, a Dunkin Doughnuts Columbia Supreme if you must know, and I opened the bag with a pair of scissors I keep in the Bud Cave coffee room.
When I get a haircut, they use scissors. When I want to remove a stray thread from a shirt, I use scissors.  Think about how often you use scissors and for how many different purposes.  Its amazing.  I am getting more excited about scissors as I am writing this article.  I want to walk through the house here in Salt Lake looking for scissors.  I want to count how many pairs of scissorsthere are in this house.  Now that would be something important to know.
I googled “scissors” and learned from Wikipedia that scissors have been around since 1,500 BC.  I think I have that pair in the coffee room.  Wikipedia says the following about scissors:
It is most likely that scissors were invented around 1500 BC in ancient Egypt. The earliest known scissors appeared in Mesopotamia 3,000 to 4,000 years ago. These were of the 'spring scissor' type comprising two bronze blades connected at the handles by a thin, flexible strip of curved bronze which served to hold the blades in alignment, to allow them to be squeezed together, and to pull them apart when released.
Spring scissors continued to be used in Europe until the 16th century. However, pivoted scissors of bronze or iron, in which the blades were pivoted at a point between the tips and the handles, the direct ancestor of modern scissors, were invented by the Romans around 100.[2] They entered common use not only in ancient Rome, but also in China, Japan, and Korea, and the idea is still used in almost all modern scissors.
During the Middle Ages and Renaissance, spring scissors were made by heating a bar of iron or steel, then flattening and shaping its ends into blades on an anvil. The center of the bar was heated, bent to form the spring, then cooled and reheated to make it flexible.
William Whiteley & Sons (Sheffield) Ltd. is officially recognized as first starting the manufacture of scissors in the year 1760, although it is believed the business began trading even earlier. The first trade-mark, 332, was granted in 1791.

Pivoted scissors were not manufactured in large numbers until 1761, when Robert Hinchliffe produced the first pair of modern-day scissors made of hardened and polished cast steel. He lived in Cheney Square, London and was reputed to be the first person who put out a signboard proclaiming himself "fine scissor manufacturer".
During the 19th century, scissors were hand-forged with elaborately decorated handles. They were made by hammering steel on indented surfaces known as bosses to form the blades. The rings in the handles, known as bows, were made by punching a hole in the steel and enlarging it with the pointed end of an anvil.
In 1649, in a part of Sweden that is now in Finland, an ironworks was founded in the "Fiskars" hamlet between Helsinki and Turku. In 1830, a new owner started the first cutlery works in Finland, making, among other items, scissors with the Fiskars trademark. In 1967, Fiskars Corporation introduced new methods to scissors manufacturing. 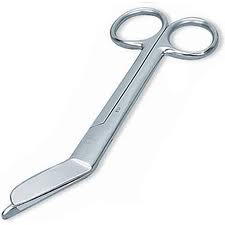 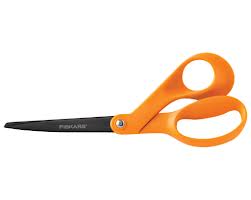 That is pretty interesting stuff, don’t you think? I am going trim my eyebrows.
Posted by Bud Headman at 9:49 AM