I just finished reading a terrific novel: The Expats by Chris Pavone.  This spy - financial shenanigans novel has all kinds of twists and turns with CIA agents, FBI agents, married couples, all set in Luxembourg, Paris and other European locales. The book kept me hooked from the beginning to the end. Unlike many spy, suspense or mystery novels, I never really figured out the ending as I was reading the book and had to watch it unfold. I figured out that one couple was not who they pretended to be but the story of the lead couple (Kate and Dexter) kept evolving.

Here is a blurb of the review from the New York Times Review of Books:

"There are two salient quirks in “The Expats,” Chris Pavone’s novel about Americans abroad. The first is Luxembourg, a place about which Mr. Pavone can be sure most readers know very little. The second is well-calibrated monotony. This book’s abundant treacheries and tricks arise from the fact that its heroine, Kate Moore, is bored stiff.


Kate has had to cut short her 15-year career because her husband, Dexter, received a lucrative job offer in Luxembourg, Europe’s only remaining sovereign grand duchy. “The Expats” is studded with odd facts about the country, because, by no coincidence whatsoever, Mr. Pavone and his family have lived there. The local color appears to come as a big surprise to Kate, who seems to have known nothing about Luxembourg until she had to leave Washington and move there. Kate was busy in Washington. As far as Dexter knew, she did something for the State Department. As far as Kate knew, Dexter did something involving computer technology. “The Expats” hinges on the idea that neither spouse knew what the other was up to. " 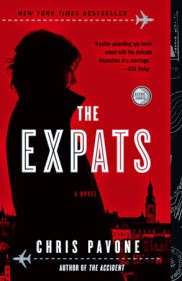 This is not a long book, 326 pages or so and I read it fairly quickly. I recommend it if you like suspense type novels.

I have another book by Chris Pavone to read.  I will start on that one soon.