I am writing this on Memorial Day.  A day to celebrate and honor those who have passed before us and particularly those men and women who have served our country in the army, the navy, the air force , the marines and the coast guard. Those who have served in the military, whether they died during service or they came home from their wars and died at some point later in life, they are true American heroes.  I respect them, I admire them and I am thankful for their service.  Even if the war in which they served was not popular, these men and women of the military did their duty for their country,  I should say our country, sacrificing their lives, physical and emotional health and just normal civilian living such as going to school, starting families and starting professions.

Yesterday I thought about something I did in October 22 years ago.  For my 40th birthday in October 1992, I went to Amsterdam, Belgium and Luxembourg.  On my birthday, October 22nd, I was in Luxembourg.  I visited the American Military Cemetery in Luxembourg.  I walked the rows of white crosses and Stars of David, each with the name of soldier killed in action in World War II.

Here are some details about the cemetery: 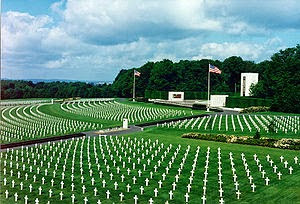 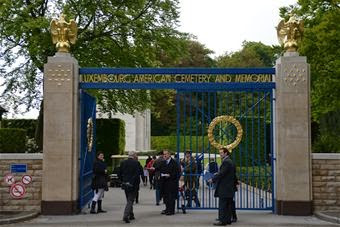 The Battle of the Bulge (16 December 1944 – 25 January 1945) was a major German offensive campaign launched through the densely forested Ardennes region of Wallonia in Belgium, France, and Luxembourg on the Western Front toward the end of World War II in Europe. The surprise attack caught the Allied forces completely off guard. United States forces bore the brunt of the attack and incurred their highest casualties for any operation during the war. The battle also severely depleted Germany's armored forces on the western front which Germany was largely unable to replace. German personnel and Luftwaffe aircraft also sustained heavy losses.The Germans' initial attack included 200,000 men, 340 tanks and 280 other tracked vehicles. Between 67,200 and 100,000 of their men were killed, missing or wounded.For the Americans, 610,000 men were involved in the battle, of whom 89,000 were casualties, including up to 19,000 killed.   It was the largest and bloodiest battle fought by the United States in World War II

As I was walking through the rows of crosses, I grew misty eyed as I read the names of men or should I say boys, who died at age 17,  19, 19, 20 and 21.  Certainly there were older men who were laid to rest there but it seems that most were so young.   Each was someone’s son, or brother or father or husband or friend.  It struck me that day that each cross or Star of David was not just a white memorial but was the representation of a hero that had his own story of life, love, family, friends and tragic death.

As I walked the rows  of crosses and stars  there were tears in my eyes.  Eventually I came upon a white stone cross of a 21 year old man from Nephi, Utah. I was stunned, Nephi is a small town some 90 miles south of Salt Lake City.  Here in this quiet cemetery in Luxembourg some 5,200 miles from Nephi,was a 21 year old soldier who died in the Battle of the Bulge.  As I read his name and traced my fingers on the engraved letters on his memorial cross, I wondered about him, his family, his death.  I thought about him for some time after that trip but then, like most things, the memory of that day was confined to the recesses of my mind.

The Lovely Sharon and I are going to Europe this summer and we will spend a day or so in Luxembourg.   A few days ago I was thinking about our upcoming trip.   I thought about the Luxembourg cemetery and I thought about this man from Nephi,  Who was he?  I did a google search and found the following from the Salt Lake Tribune:

Pfc. James L. Belliston, formerly reported missing in action, has been designated killed in action Jan. 26 in Germany.  Holder of the silver star for gallantry in action, Pfc. Belliston entered the army in August, 1943, and was assigned overseas a year later. A native of Nephi, he was graduated from Juab high school at Nephi prior to entering the services.

Here he was, James L. Bellinston, Jr. from Nephi, UT, buried in the Luxembourg American Cemetery, Plot E., Row 13, grave 54.   An American hero, Silver Star and Purple Heart.  This man from Nephi, who in the service of our country, died at age 21 in the Battle of the Bulge.  Just reading the Salt Lake Tribune article makes me cry.  If he had lived, what difference might there be in the world.  Would he had been a wonderful husband or father?  Would he have been the mayor of Nephi, an inventor, a farmer?  Who knows?

James Belliston, 70 years after your death, I wonder about you, I admire you and I thank you.
Posted by Bud Headman at 5:44 PM